Police apologise for not breaking up all-night rave where 1,000 revellers paid no attention to social distancing rules saying it was too big to shut down

Apologetic police have said sorry to families after they failed to stop nearly 1,000 people breaking lockdown for an all-night rave on a residential street.

Parents were furious after hundreds of revellers took over their street and kept them awake all night by blasting out loud music.

The huge crowd drank and danced the night away in front of a DJ playing dub music at the impromptu event in Stokes Croft, Bristol.

Video footage filmed by Best of Bristol showed the event in full swing on Saturday night as people packed tightly together in a massive crowd.

Resident Clare Bennett wrote online: ‘This was right at the end of my road so none of us in the house could sleep last night.

‘I feel very angry and genuinely upset that people can be so selfish.

‘Having a club night outside, in a residential area is bad enough and something that seems to happen more often around here, even before lockdown. But to do it in the middle of a pandemic is just incredible. Selfish, selfish, selfish people.’

Another mum told ITV News ‘it started at 3pm – a large marquee and sound system – it was selfish irresponsible and probably illegal – we are in the middle of a pandemic – I’m furious’.

On Sunday morning the street was filled with empty beer cans, canisters of laughing gas and bins overflowing.

Police said sorry to residents affected and claimed that by the time they were able to attend, the event was already too large to shut down.

A spokesman said officers focused on ensuring it didn’t get any bigger due to the potential for ‘serious disorder’ after the organisers ‘refused to engage’. 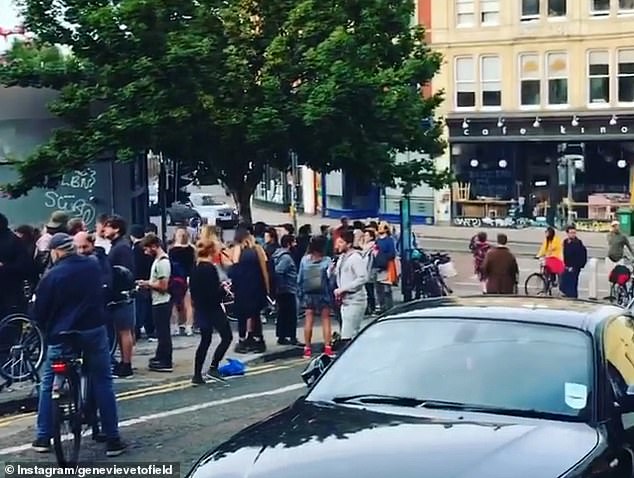 The police added it would be reviewing its procedures as a result.

But those living on the street took to social media to share their anger.

Jane Holehouse who lives on a neighbouring street added: ‘I feel exactly the same! People were also relieving themselves literally anywhere! Disgusting.

‘Went on for 12 hours, no idea why the police didn’t shut it down. Let’s watch Bristol’s numbers spike now! Will they all be going to see their fathers today?? Pass it on?? 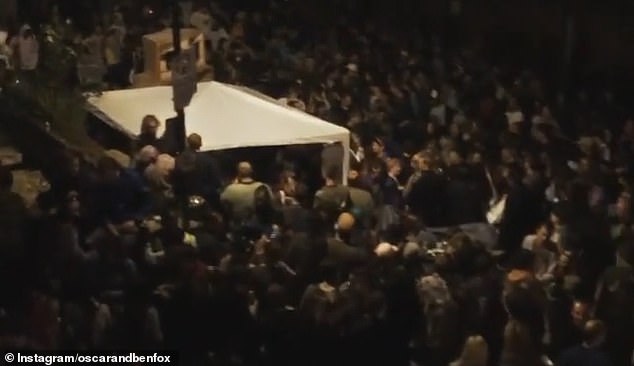 Avon and Somerset Police said: ‘We would like to apologise to those affected by the noise and nuisance caused by a rave in Stokes Croft and a large party in St Werburgh’s overnight Saturday 20 to Sunday 21 June.

‘We are reviewing the appropriateness of our response to two calls received around 4pm regarding a possible party being organised at Sydenham Road, and whether this presents any opportunities to review our procedures.

‘When we had complaints at about 5.30pm regarding noise nuisance in Sydenham Road and in Narroways Road, St Werburgh’s, officers were unable to attend immediately due to the number of live incidents across Bristol, including assaults, collisions, domestic abuse, concern for welfare and missing people, in many cases with a significant risk of someone coming to physical harm.

‘As further calls came in from 7.30pm there were already significant numbers at each location. 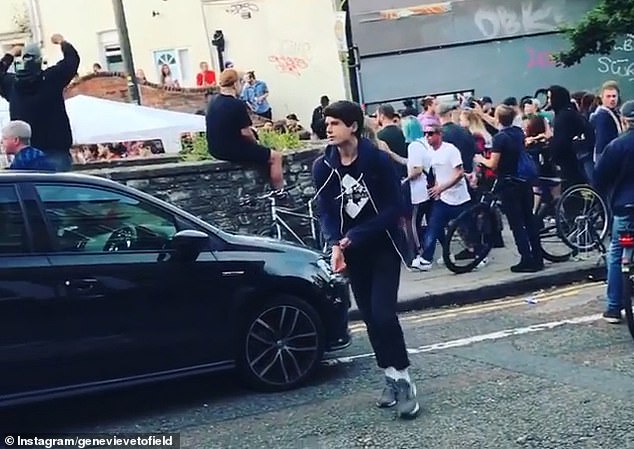 Avon and Somerset Police had warnings about the rave, but did not attend until three hours later

‘Police did attend and speak with the organisers who refused to engage.

‘For the safety of all involved, due to the potential for serious disorder, it was decided to focus on preventing further attendance at the events rather than attempting to seize the sound system.

‘Over coming days officers will be carrying out regular patrols of potential rave sites and engaging with the owners of vacant properties and landowners to ensure they have appropriate security.

‘Anyone with information about a potential rave site, or who sees sound equipment being taken into a disused property or plot of land should call us immediately on 101.’

Related posts:
June 22, 2020 World News Comments Off on Police sorry for not stopping all-night rave because it was 'too big'
Celebrity News:
Thandie Newton Opens Up About Surviving Sexual Assault as a Teenager
Paris Jackson Confesses That She Did Try To Kill Herself In New ‘Unfiltered’ Episode
Kylie Jenner Claps Back After Fans Accuse Her of Snubbing Black Designer
Lucy Mecklenburgh stuns in summer dress as she goes shopping ahead of first date night since welcoming son Roman
Mary Trump's Tell-All Book: President Cheated on SATs, Commented on Niece's Breasts, Abandoned Brother on Deathbed
Recent Posts
This website uses cookies to improve your user experience and to provide you with advertisements that are relevant to your interests. By continuing to browse the site you are agreeing to our use of cookies.Ok