Donald Trump nominates Amy Coney Barrett, 48, to the Supreme Court to replace Justice Ruth Bader Ginsburg: President and Melania introduce ‘one of the nation’s most brilliant legal minds’ with her husband and seven children at the White House

‘Today it is my honor to nominate one of our nation’s most brilliant and gifted legal minds to the Supreme Court,’ Trump said, making his nomination official as Barrett stood to his side. ‘She is a woman of unparalleled achievement, towering intellect, sterling credentials and unyielding loyalty to the Constitution: Judge Amy Coney Barrett.’

Barrett had been a leading contender for the nomination, having been considered for the seat now occupied by Justice Brett Kavanaugh, who was confirmed in 2018.

The 7th U.S. Circuit Court of Appeals judge had met with Trump this week.

Barrett called the ceremony a ‘rather overwhelming occasion’ and a ‘momentous decision’ for a president.

‘I am truly humbled by the prospect of serving on the Supreme Court,’ she added.

Barrett, at one point, spoke directly to the American people: ‘The president has nominated me to serve on the United States Supreme Court and that institution belongs to all of us.’

”I would assume this role to serve you,’ she pledged.

She entered the Rose Garden in lock step with the president, with her seven children and husband and first lady Melania Trump not far behind.

‘This should be a straighforward and prompt confirmation. It should be very easy,’ Trump said with a laugh, adding, ‘Good luck. It will be very quick … We said that the last time, didn’t we?’ a reference to the 2018 Kavanaugh fight.

‘I further urge all members of the other side of the aisle to provide Judge Barrett with the respectful and dignified hearing that she deserves, and frankly, that our county deserves,’ Trump said. 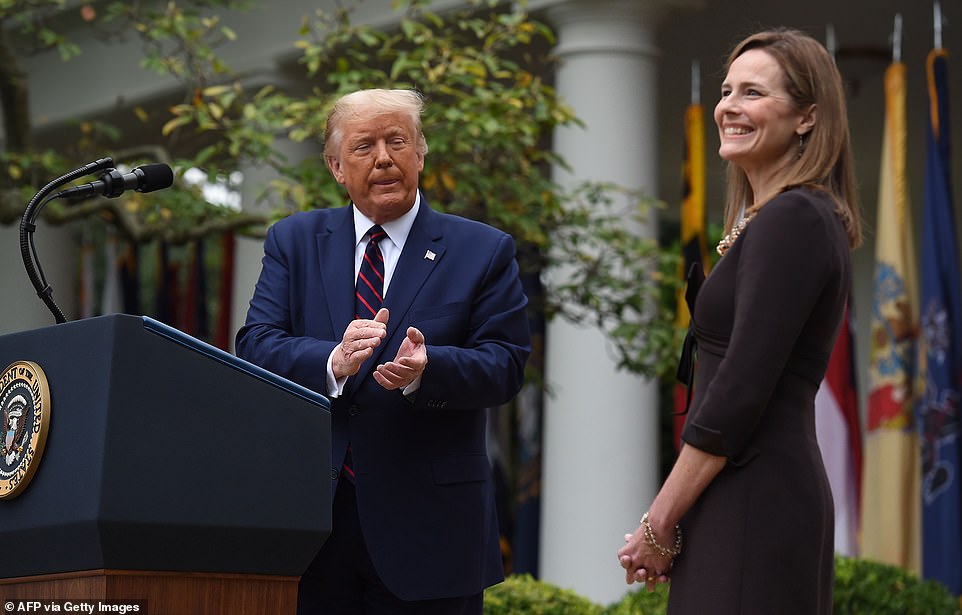 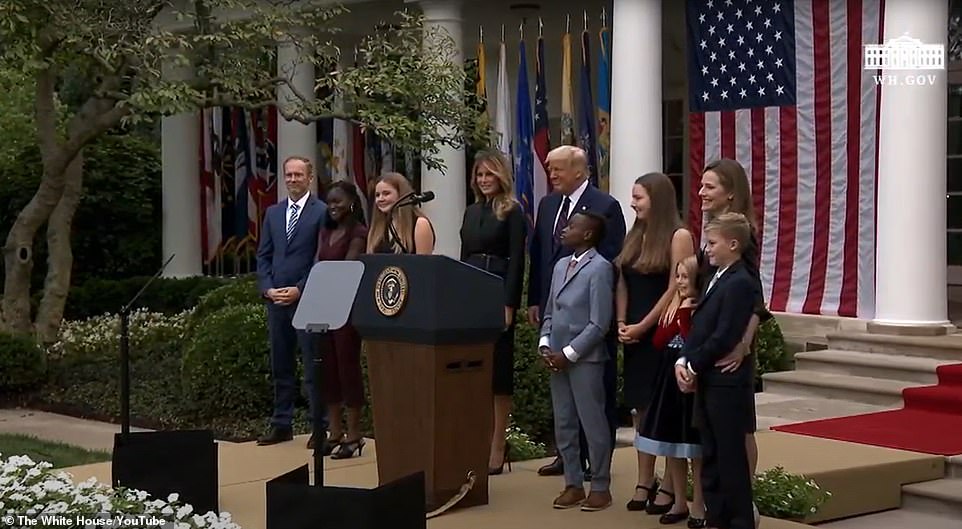 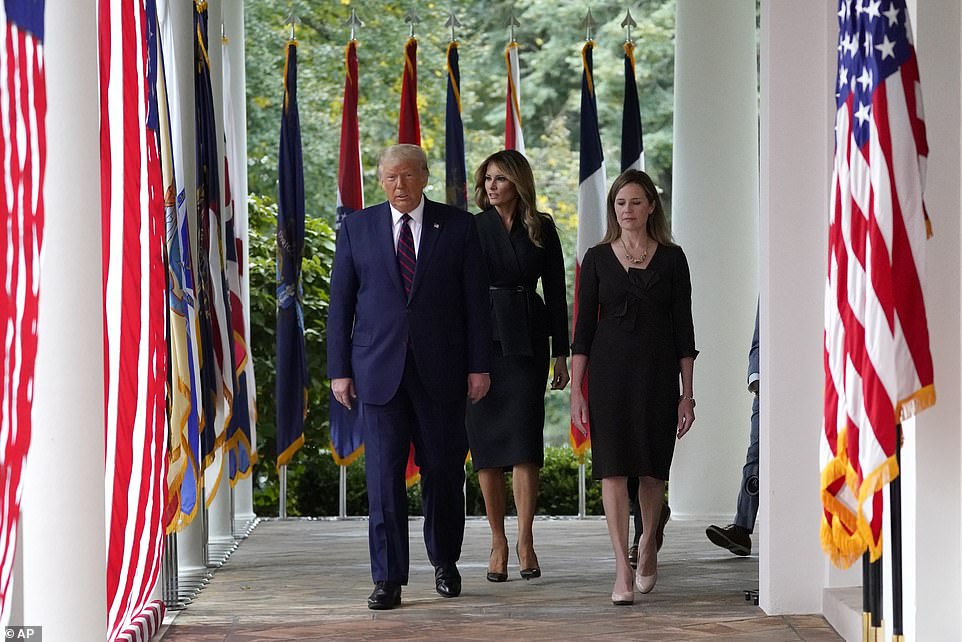 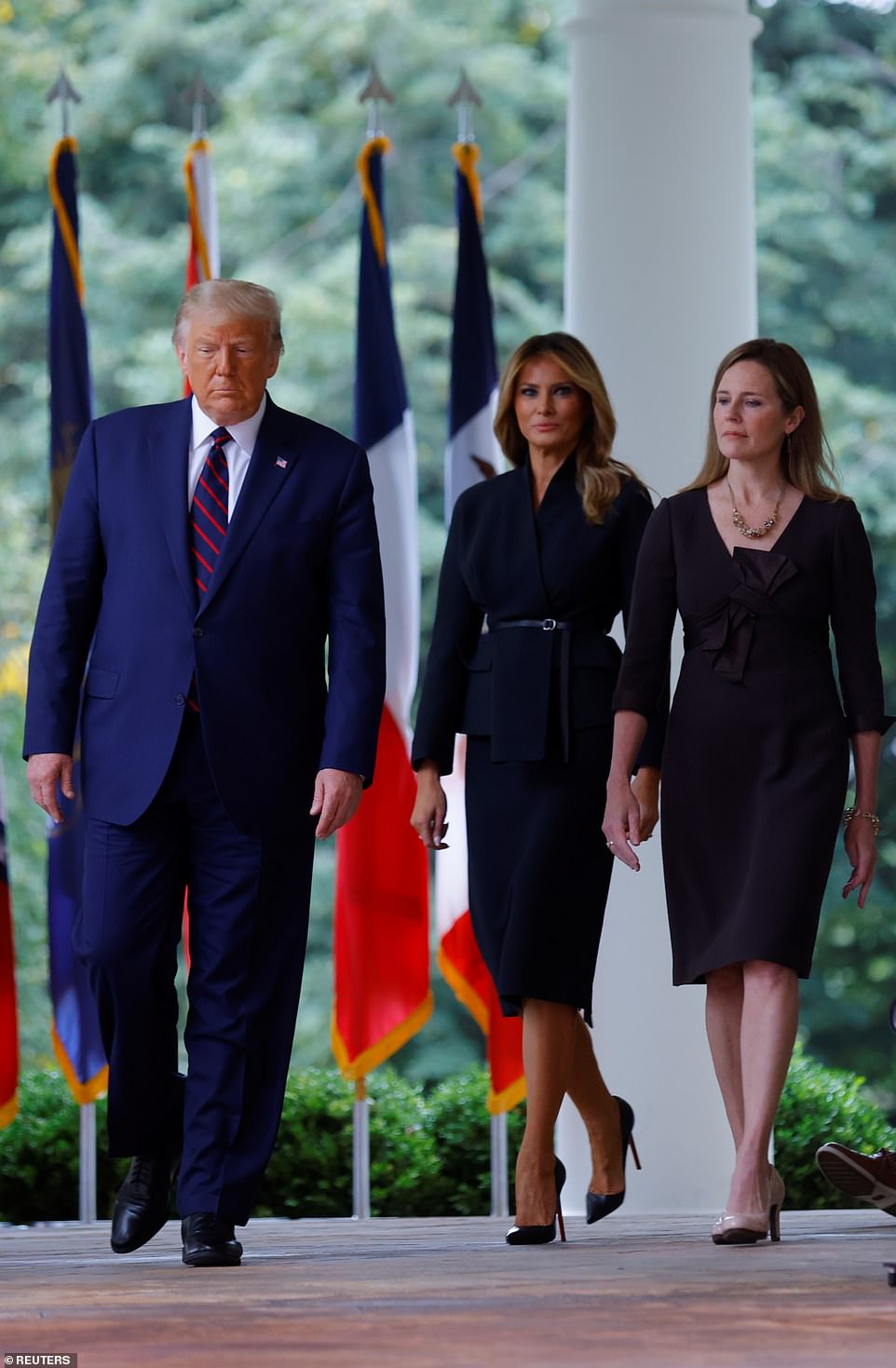 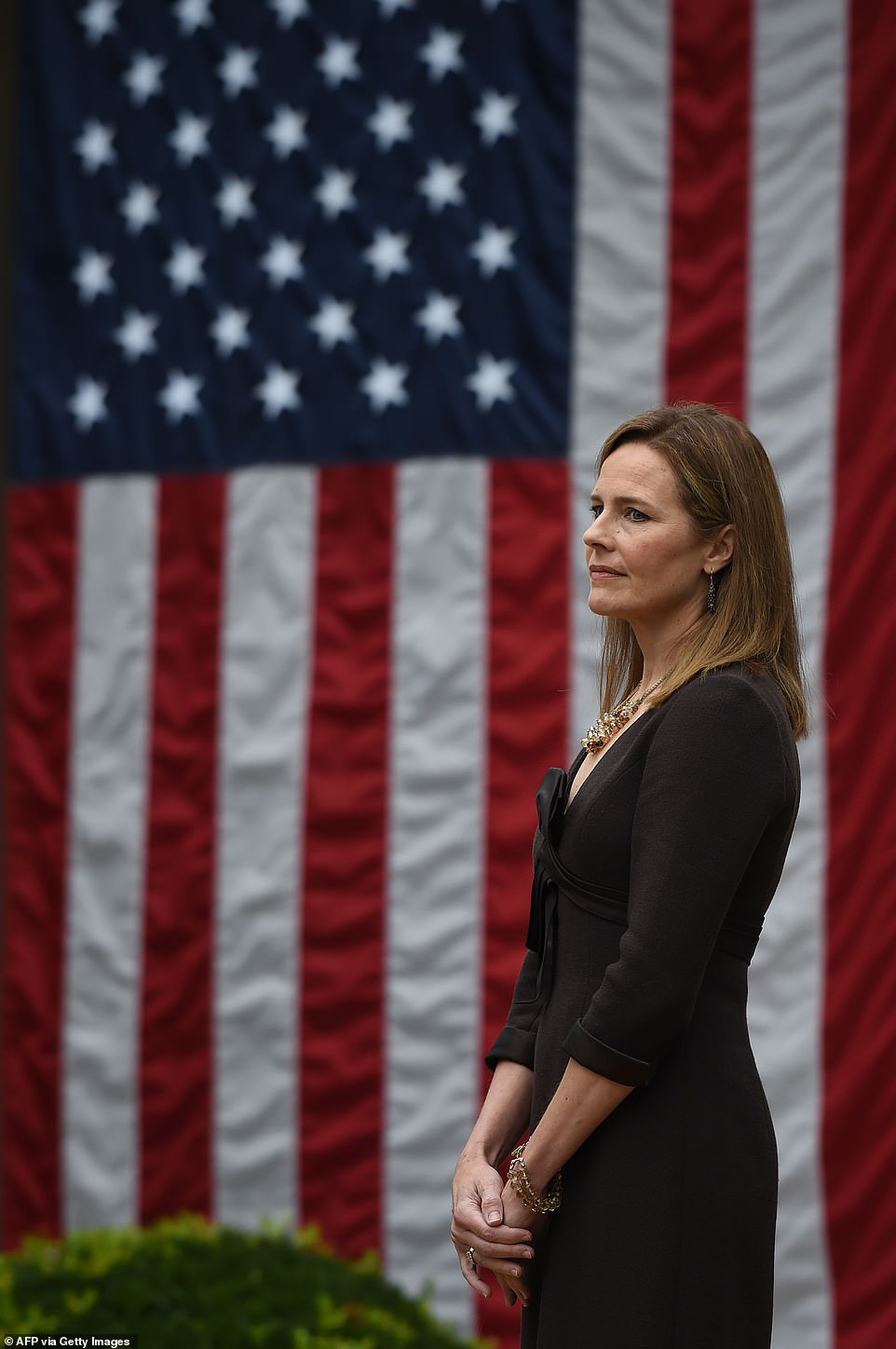 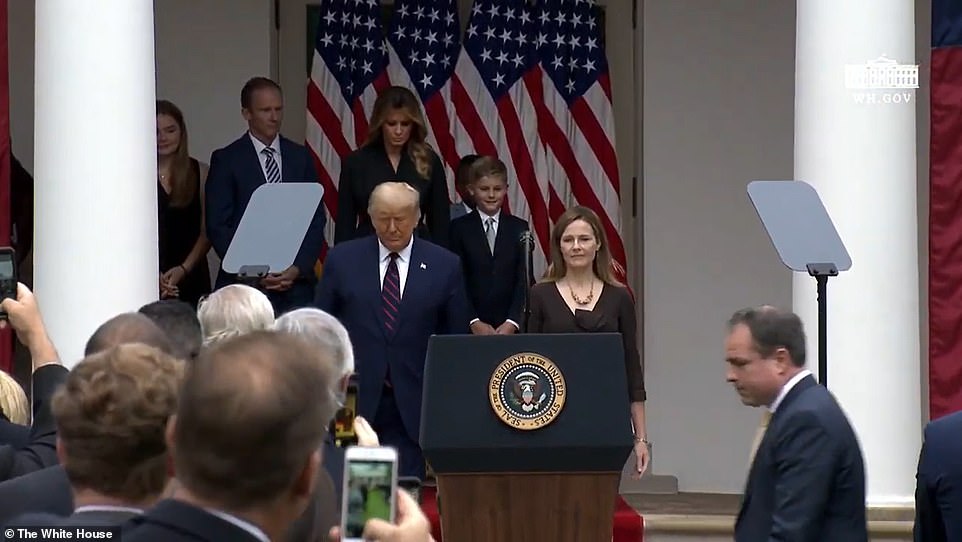 The president was joined by first lady Melania Trump at the ceremony, while Amy Coney Barrett brought her kids 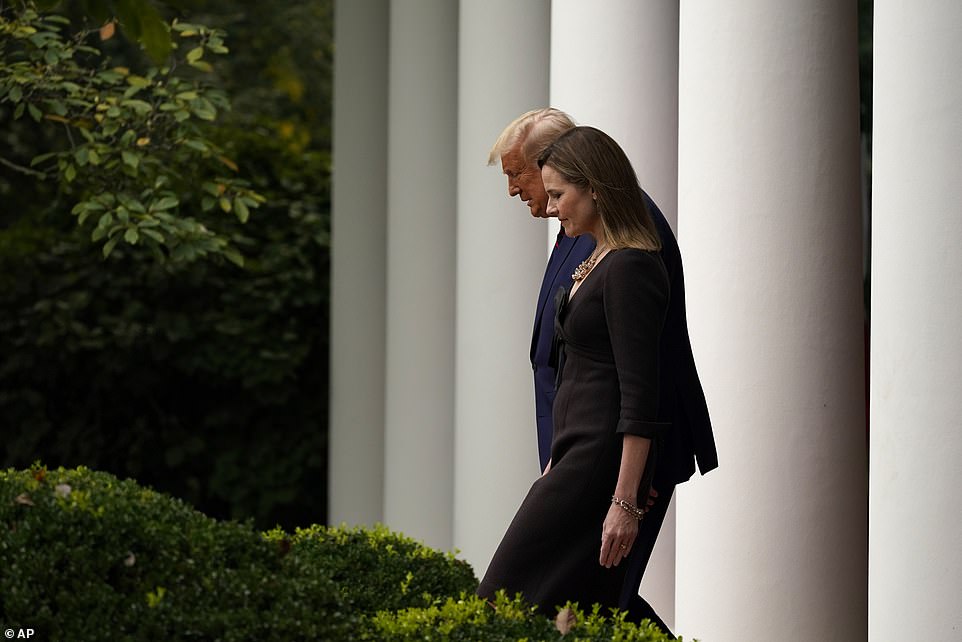 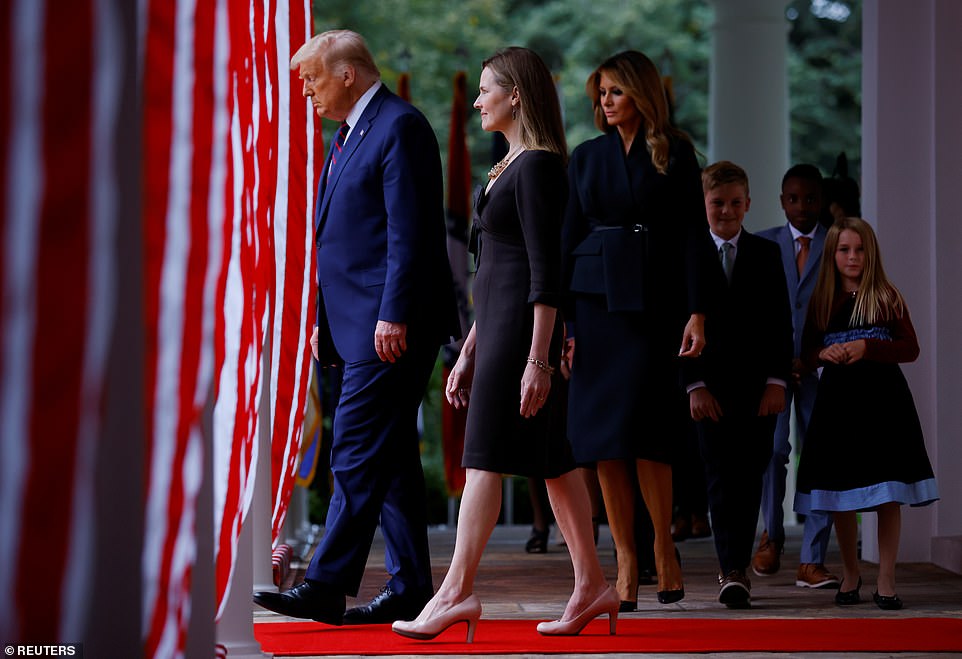 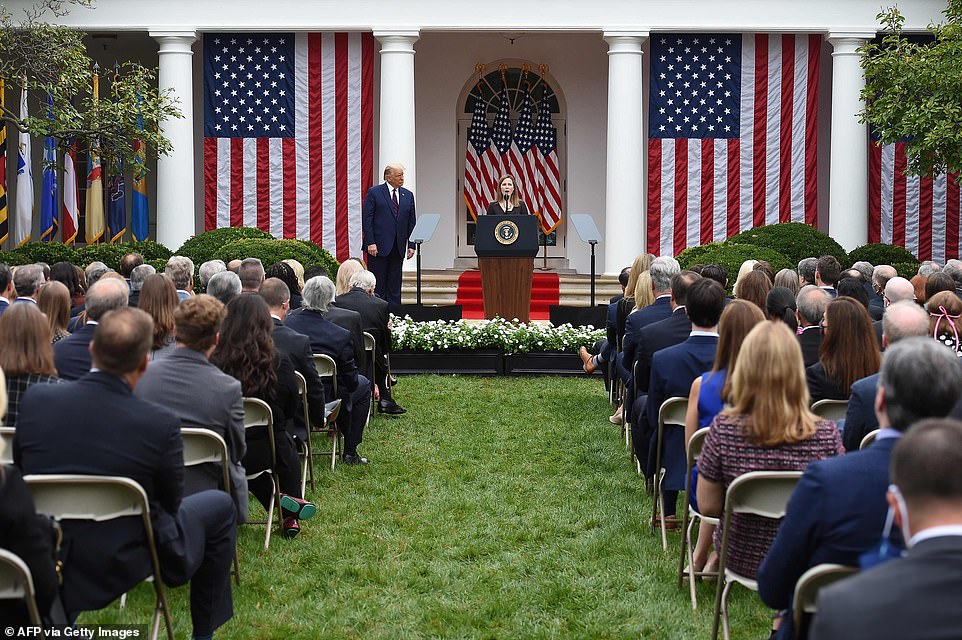 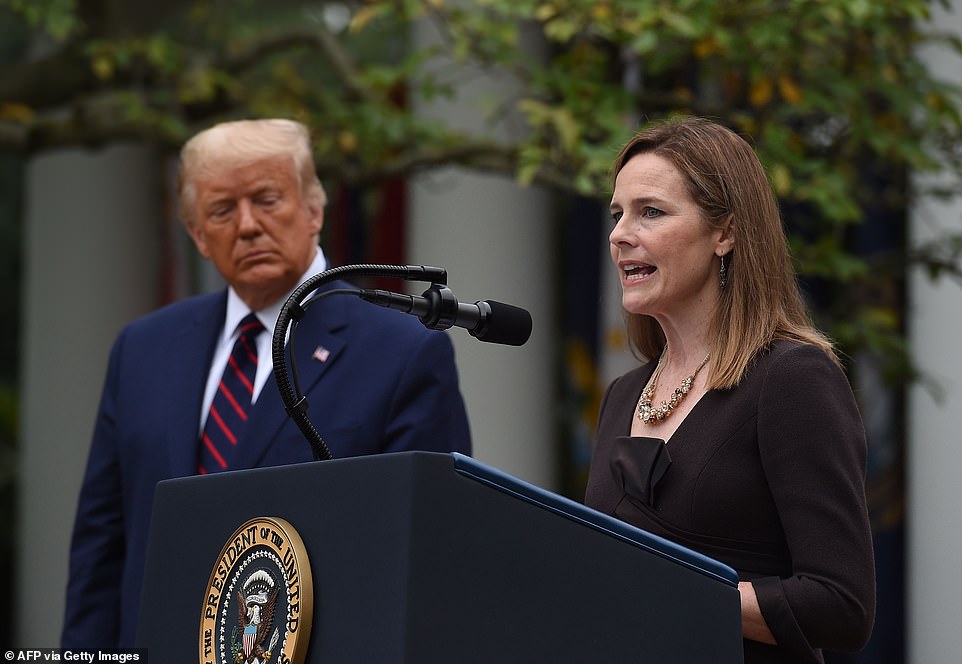 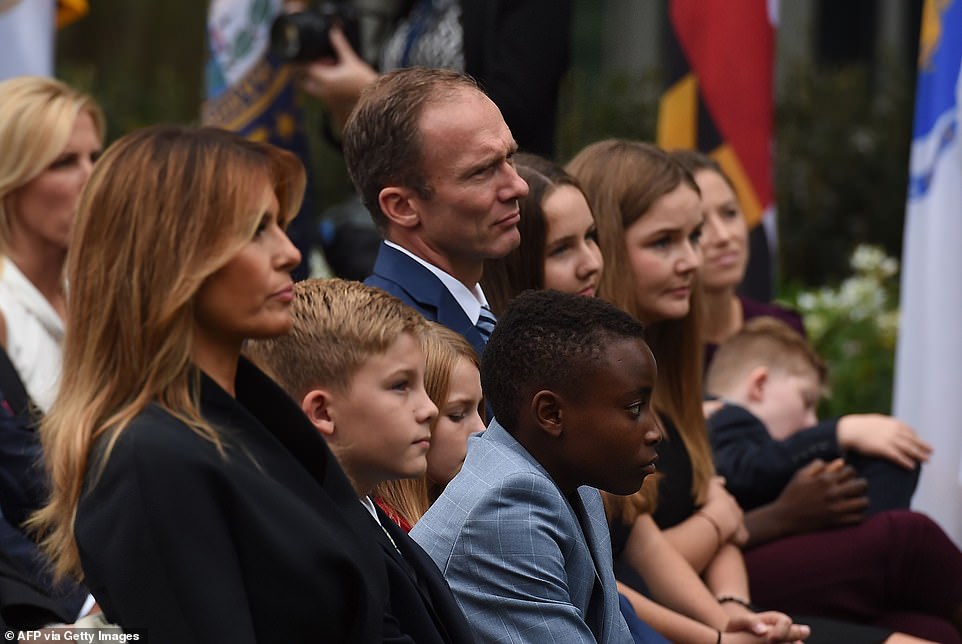 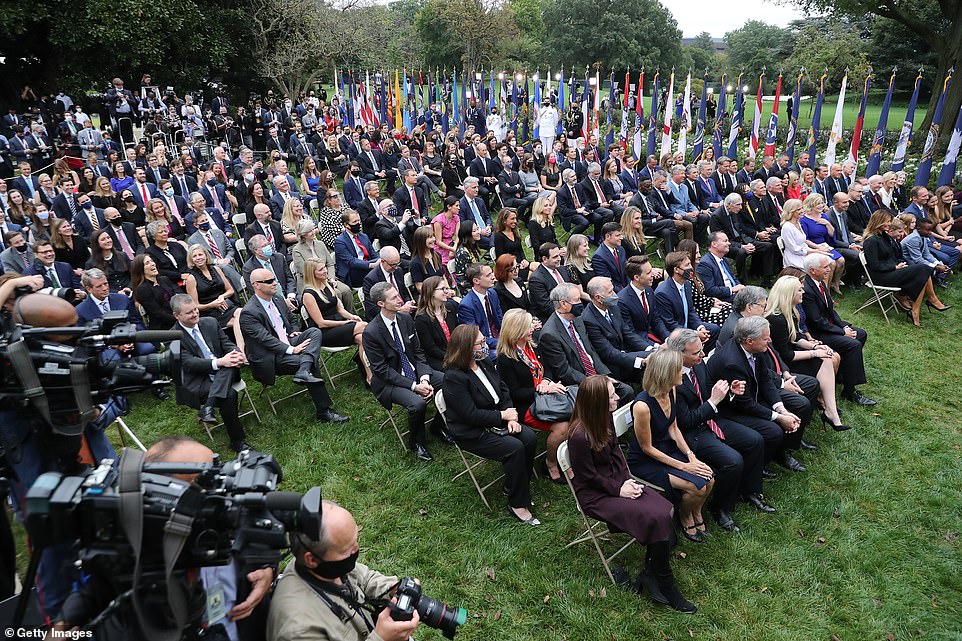 A number of U.S. senators and administration officials were in the White House audience, who didn’t practice social distance and with many attendees choosing not to wear masks amid the coronavirus pandemic 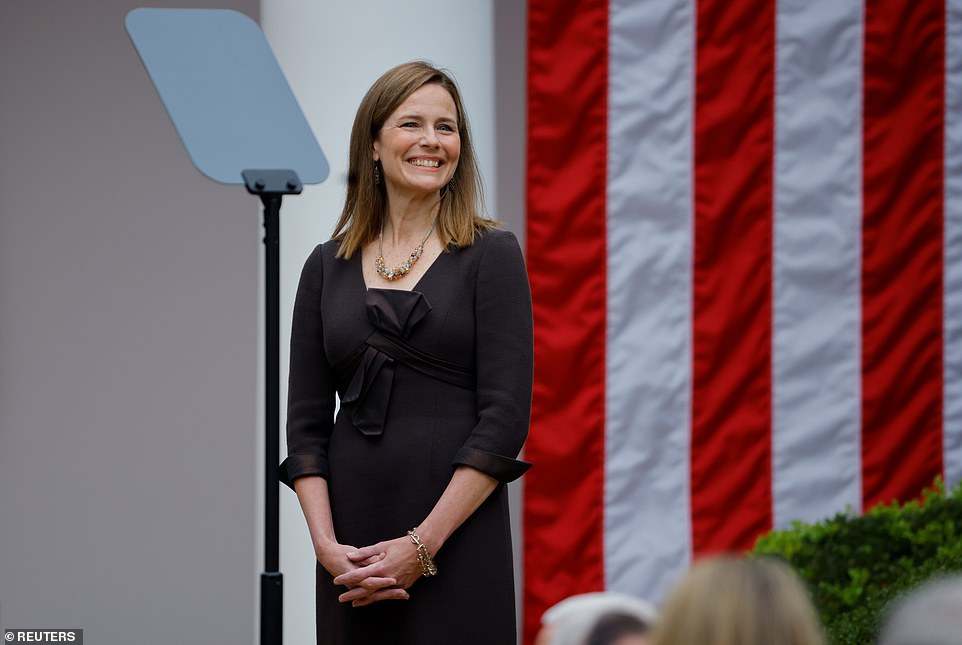 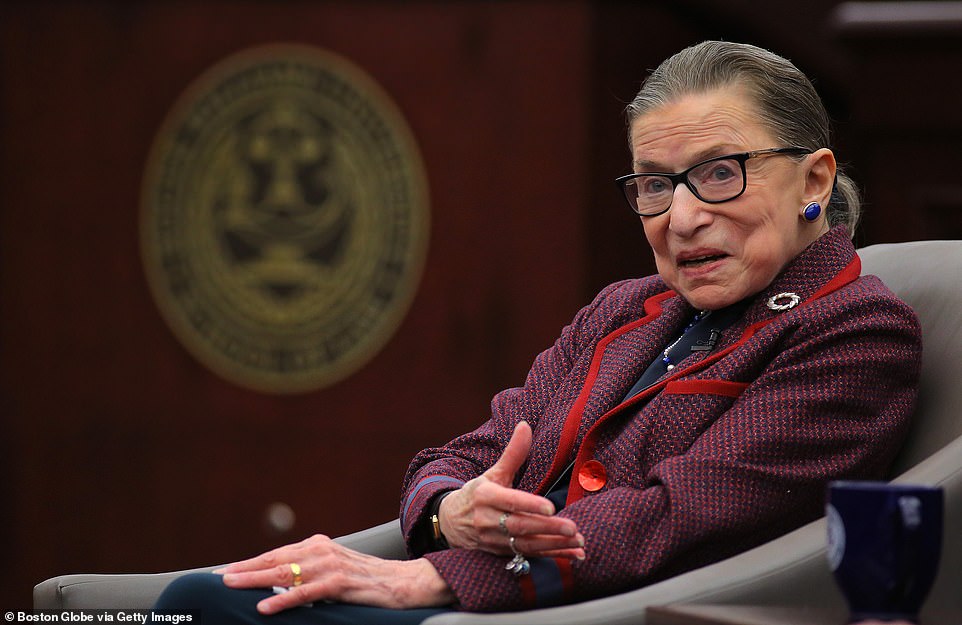 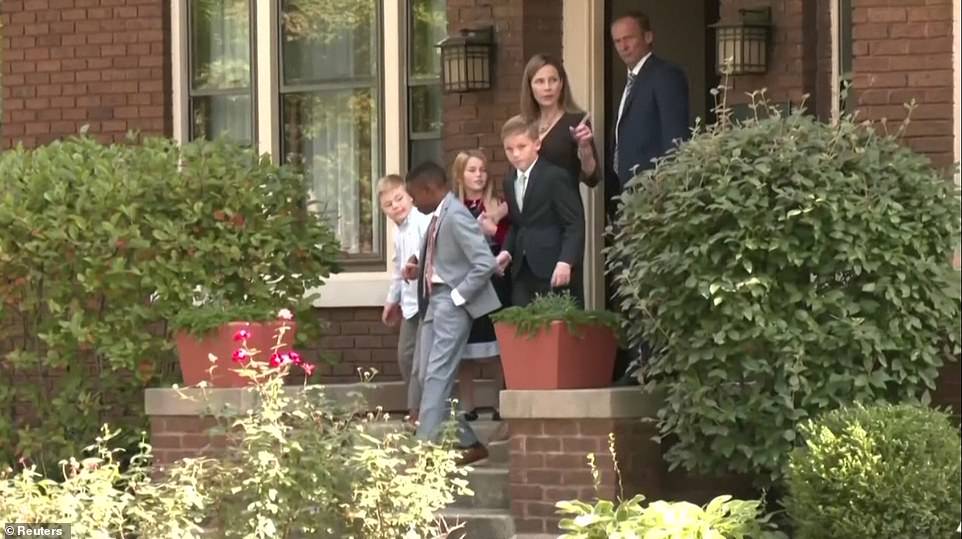 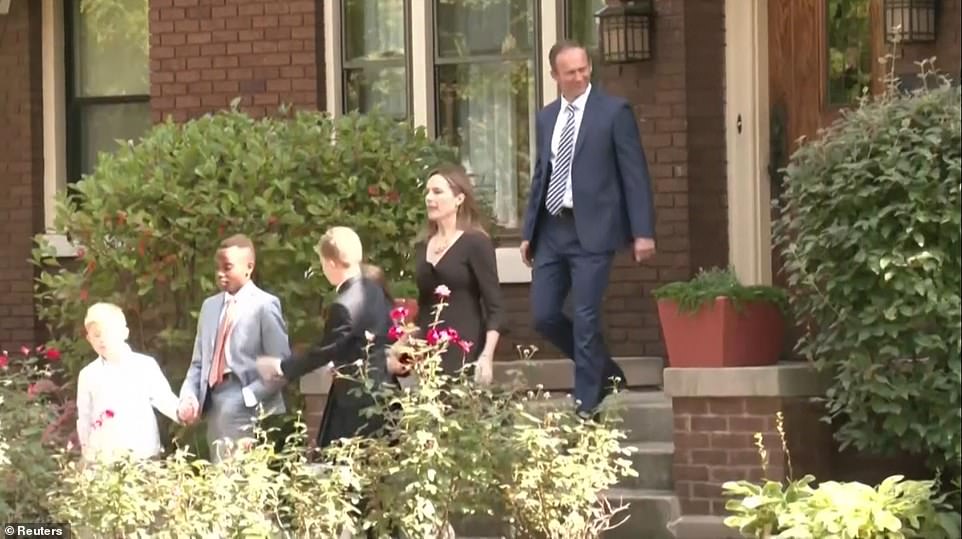 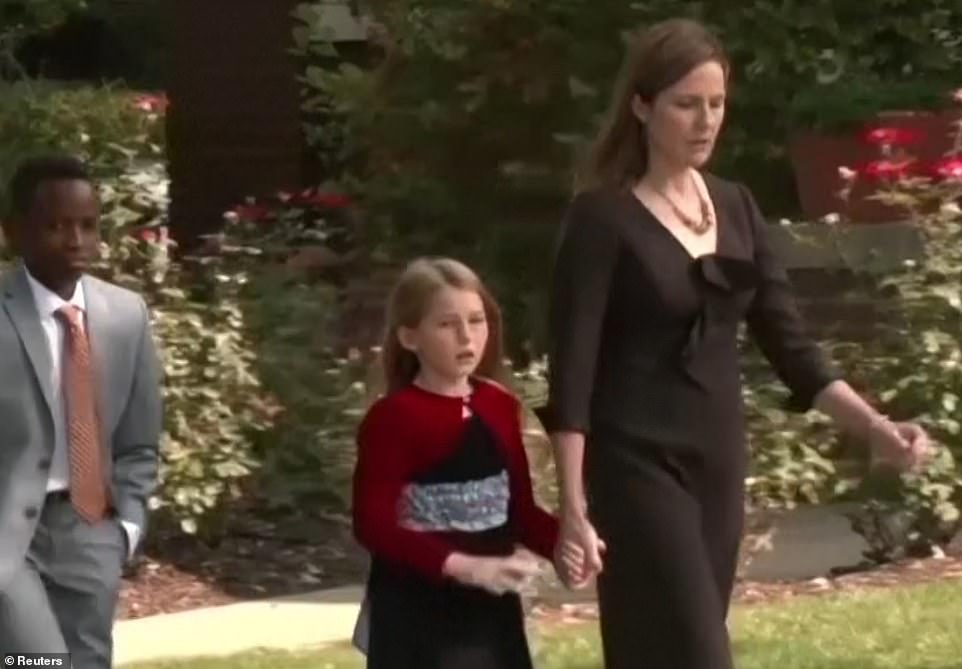 Judge Amy Coney Barrett holds the hand of her daughter Juliet as son John Peter trails behind. Barrett is a mom of seven 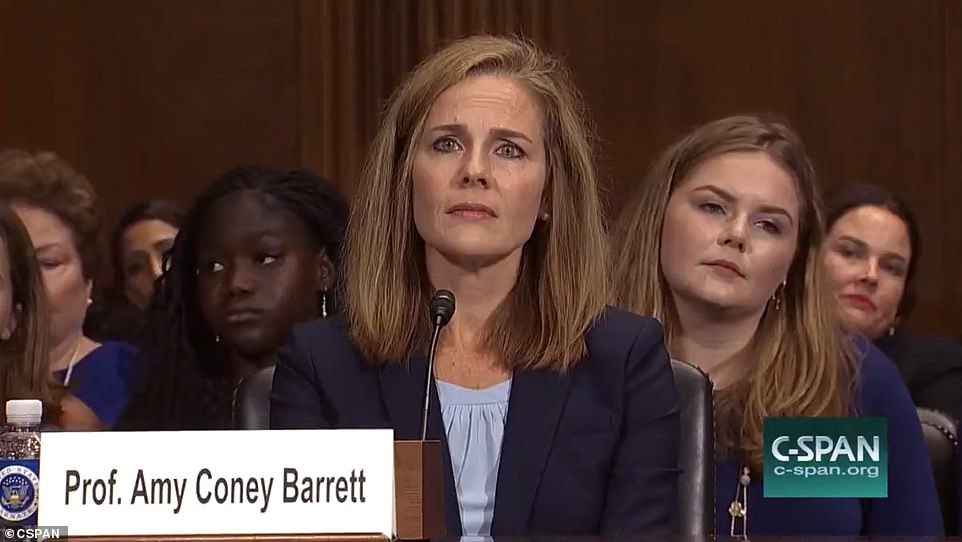 He asked Democrats and the media not to engage in ‘personal or partisan attacks’ of his new nominee.

‘The stakes for our country are incredibly high,’ Trump said. ‘Rulings that the Supreme Court will issue int he coming years will decide the survival of our Second Amendment, our religious liberty, our public safety and so much more.’

He brought up his own campaign’s theme of ‘law and order’ during his brief speech.

‘Law and order is the foundation of the American system of justice,’ Trump said. ‘I am supremely confident that Judge Barrett will issue rulings based solely on the fair reading of the law.’

The president played up Barrett’s credentials as a working mom.

‘If confirmed Justice Barrett will make history as the first mother of school-age children to ever serve on the Supreme Court,’ Trump said to cheers and applause.

Speaking now to her seven children, the president added, ‘Thank you for sharing your incredible mom with our country.’

‘The president has asked me to be the ninth justice, and as it happens, I’m used to being in a group of nine – my family,’ Barrett remarked in the Rose Garden.

She’s a 48-year-old New Orleans native who attended Rhodes College and received her law degree from Notre Dame law school, where she later taught. She lives in South Bend, Indiana.

Conservatives have heralded the pick of Barrett as the heir-apparent of Justice Antonin Scalia who died in February 2016.

Trump spoke of the Scalia connection in his Rose Garden speech remarking how a Notre Dame professor had recommended Barrett to the late justice as a law clerk writing, ‘Amy Coney is the best student I ever had.’

Maureen Scalia, Scalia’s widow, was in the audience Saturday, as was Trump’s Secretary of Labor Eugene Scalia, the late justice’s son. ‘Very good genes in the family, I will say,’ Trump remarked.

Barrett, who clerked for Scalia, shares his belief in an originalist interpretation of the U.S. Constitution.

‘Amy Coney Barrett will decide cases based on the text of the Constitution as written,’ Trump told the crowd, who was not practicing social distancing, with many choosing not to wear masks.

Speaking of her former boss Barrett said, ‘his judicial philosophy is mine too.’

‘A judge must apply the law as written. Judges are not policy makers and they must be resolute in setting aside any policy views they might hold,’ Barrett said. 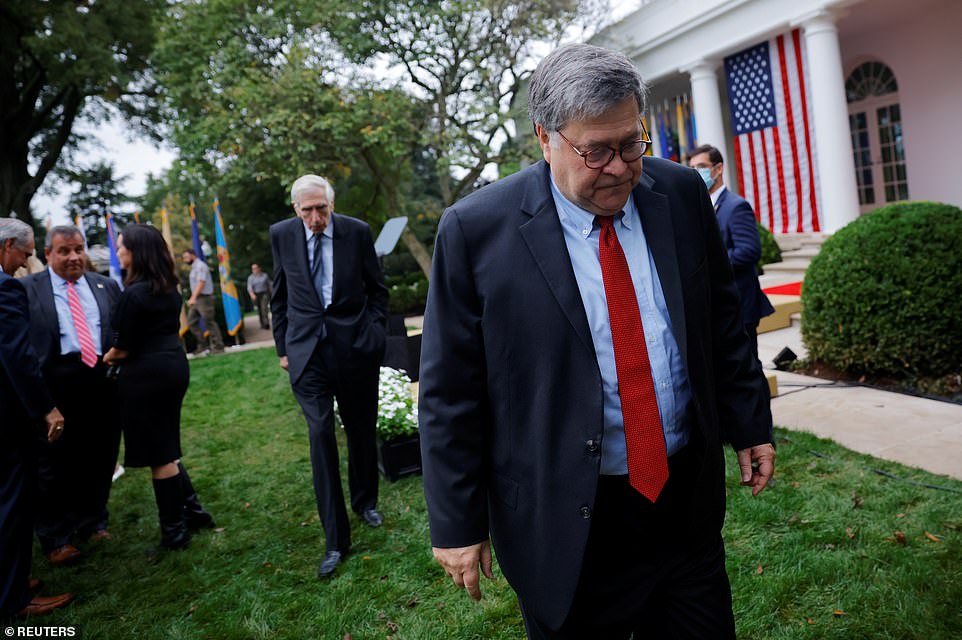 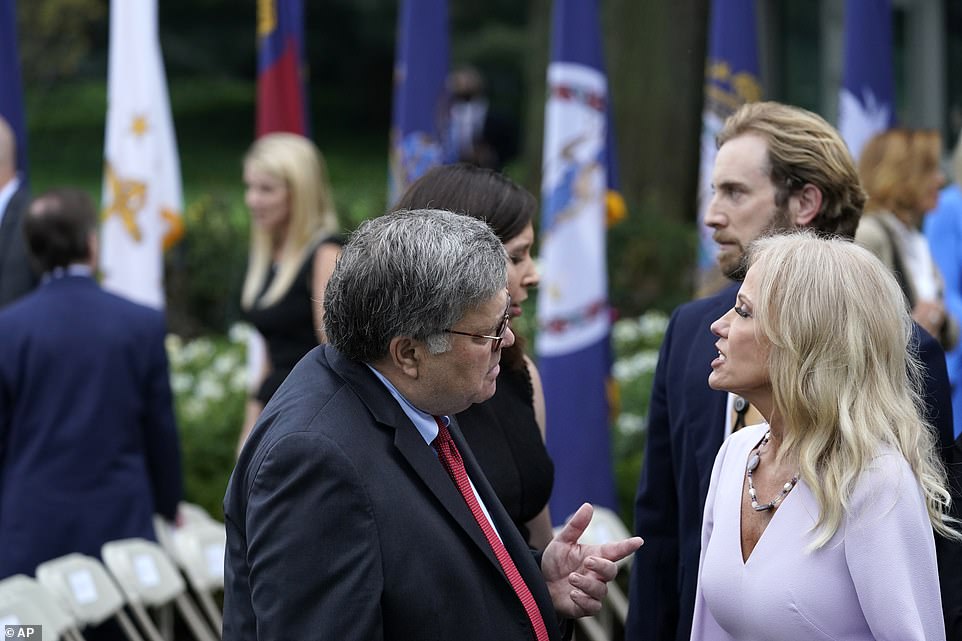 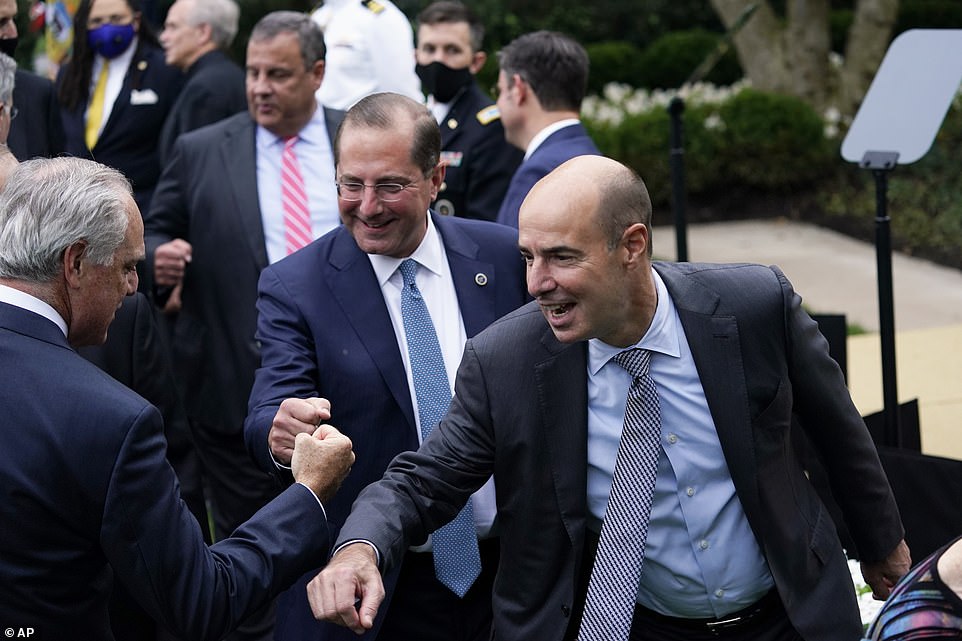 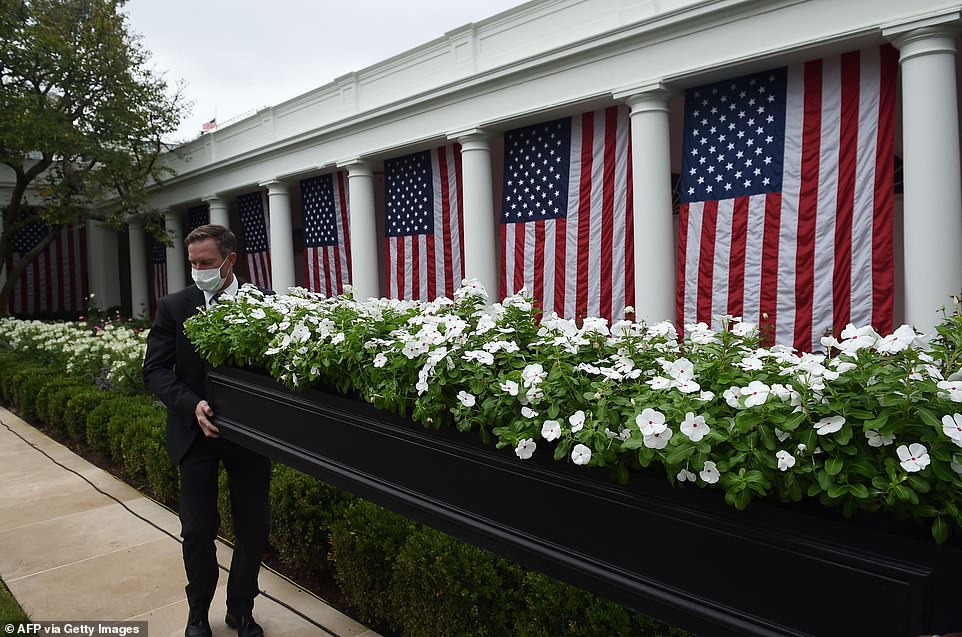 If her nomination is successful, it will give the Supreme Court a hard jerk to the right, as she’ll be replacing the court’s most liberal member, the late Justice Ruth Bader Ginsburg, who died September 18.

Both Barrett and Trump paid homage to Ginsburg during their remarks.

Trump referred to the liberal Ginsburg as a ‘true American legend,’ a ‘legal giant’ and a ‘pioneer for women.’

Barrett promised to be ‘mindful of who came before me.’

‘The flag of the United States is still flying at half staff in memory of Justice Ruth Bader Ginsburg to mark the end of a great American life,’ Barrett said. ‘Justice Ginsburg began her career when women were not welcome in the legal profession. But she not only broke glass ceilings she smashed them. For that she has won the admiration across the country and indeed all over the world.’

Scalia’s name again came back up, as Barrett talked about his warm friendship with Ginsburg over the years – despite their opposite political persuasions.

‘Justices Scalia and Ginsburg disagreed fiercely in print, without rancor in person. Their ability to maintain a warm and rich friendship despite their differences even inspired an opera,’ Barrett said.

She said their friendships proved that ‘arguments, even of matters of great consequence, need not destroy affection.’ Barrett said she too tried to meet that standard.

Liberals fear that Barrett could chip away the ability for women to get a legal abortion, as the landmark 1973 case Roe v. Wade revolved around a right to privacy, which isn’t explicitly outlined in the U.S. Constitution.

Barrett would also be replacing a Jewish member of the court with a devout Catholic, bringing the number of Catholics on the bench to six.

Barrett’s faith will likely play a role in her forthcoming Judiciary Committee hearings.

She’s a member of the People of Praise, a small Catholic group that teaches husbands are the heads of the family.

The group was inaccurately reported to be the inspiration for Margaret Atwood’s ‘The Handmaid’s Tale,’ which is now a popular television show because the term ‘handmaid’ was used to describe a member’s personal adviser, if that adviser was female.

Members of the group also swear a loyalty oath, which some legal scholars have found problematic because they raise questions about a judge’s impartiality and independence.

During her 2017 confirmation hearings for a seat on the Chicago-based 7th Circuit, Barrett testifed that while she was a devout Catholic, those views wouldn’t bleed into her decisions on the bench.

Sen. Dianne Feinstein, the top Democrat on the Judiciary Committee, famously told Barrett, ‘The dogma lives loudly within you.’

Conservatives including Sen. Orrin Hatch, a Utah Republican who has since retired from the Senate, knocked Democrats for deploying a ‘religious test.’

The New York Times didn’t report her membership in People of Praise until after the hearings concluded, but before the vote.

Democrats will likely bring it up during the forthcoming hearings.

Earlier Saturday, Barrett was spotted leaving her home in South Bend, Indiana with her children.

Among Barrett’s children she has five biological and two who were adopted from Haiti. She brought her eldest three daughters Emma, Vivian and Tess with her when she testified before the Senate Judiciary Committee in September 2017.

Vivian and Tess as the same age, as Vivian is one of the children adopted from Haiti.

Barrett also talked about how her youngest son, Benjamin, has special needs.

Republicans have the votes in the Senate to confirm Barrett to the Supreme Court before the November 3 presidential election.

While Republican Sen. Susan Collins, who’s facing a tough re-election fight, and Sen. Lisa Murkowski both said they didn’t think the Senate should vote on Trump’s nominee before the election, several other swing votes indicated they would – giving the president the numbers he needs.

McConnell said it was too close to the 2016 presidential election and the American people should get the opportunity to weigh in.

This was echoed by Judiciary Committee Chairman Sen. Lindsey Graham who said he wouldn’t push through a nominee in the months leading up to the 2020 presidential election, suggesting a new precedent had been set.

Graham, however, reversed course, pointing to the brutal 2018 battle to get Kavanaugh on the court.

Kavanaugh was accused by Christine Blasey Ford of sexually assaulting her when they were teens.

Kavanaugh still made it on the Supreme Court with a 50 to 48 vote.

Related posts:
September 27, 2020 World News Comments Off on President Donald Trump nominates Judge Amy Coney Barrett
Celebrity News:
Strictly Come Dancing’s Bruno Tonioli ‘worried over judging future’ following Anton Du Beke’s success
John Legend Feels ‘So So Grateful’ to Have Wife Chrissy Teigen and Kids on Thanksgiving
TALK OF THE TOWN: Wedding bells at last for model India Hicks
Selena Gomez Has Received an Apology from Peacock for Offensive ‘Saved By the Bell’ Joke
Sarah Fuller Becomes First Woman To Play Power Five College Football In Saturday Debut!
Recent Posts
This website uses cookies to improve your user experience and to provide you with advertisements that are relevant to your interests. By continuing to browse the site you are agreeing to our use of cookies.Ok