Prince William joked that he has only been allowed ‘two sips’ of Guinness so far in Ireland before officials take keep taking them away from him.

The Duke of Cambridge was speaking to locals yesterday while he and Kate spent quality time together outside Dublin and enjoyed a romantic clifftop walk.

Walking hand-in-hand and with the stunning coastline as a backdrop, the royal couple strolled along a path on the Howth peninsula under blue skies. 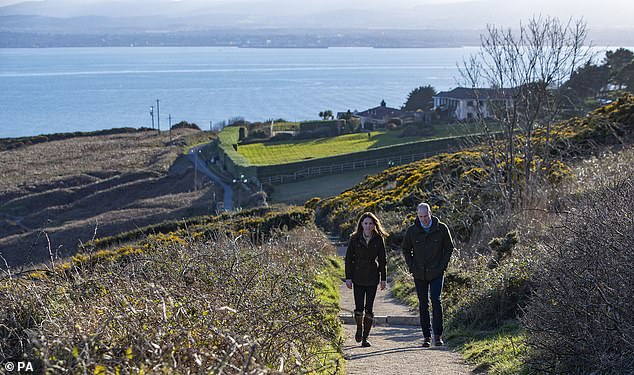 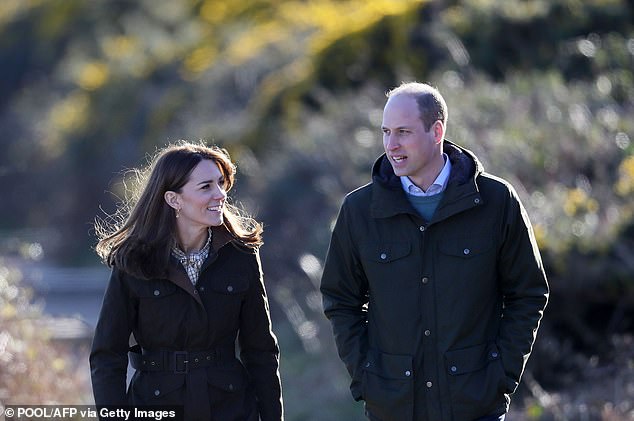 And they bumped into a group of locals, with William telling them they wanted to ‘come and get some fresh air’ during their trip which had been ‘really good’.

Kate said it was ‘such a great day to come and see the view’ before being asked if she was enjoying Ireland. She replied: ‘Yeah, we’re loving it, thank you.

‘We’ve got a few bits left – we’re going to Galway tomorrow.’ A local then replied: ‘Always fabulous, better pints of Guinness in Galway.’

And William said: ‘I know, I’ve been allowed two sips so far. Every time I have the third sip it gets taken away from me. Finish a pint by the time I…’ 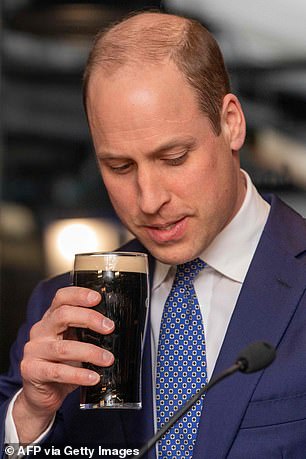 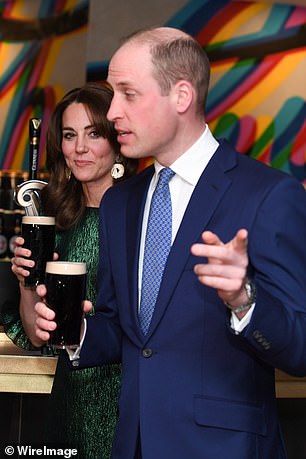 A resident replied: ‘It’s a bit of a tough gig.’ William responded: ‘Yeah, tough gig.’ The couple then walked off as a local told them: ‘Thanks for coming out.’

The Duke and Duchess were both handed a pint of the black stuff as they visited the world famous Guinness Storehouse in Dublin on Tuesday evening.

William sipped his pint enthusiastically, although it was soon taken away from him as he walked to a stage to give a speech to the gathered audience.

The Storehouse is a major visitor attraction which tells the story of the famous drink – with the duke toasting his hosts in Gaelic, raising his pint and saying ‘Slainte’. 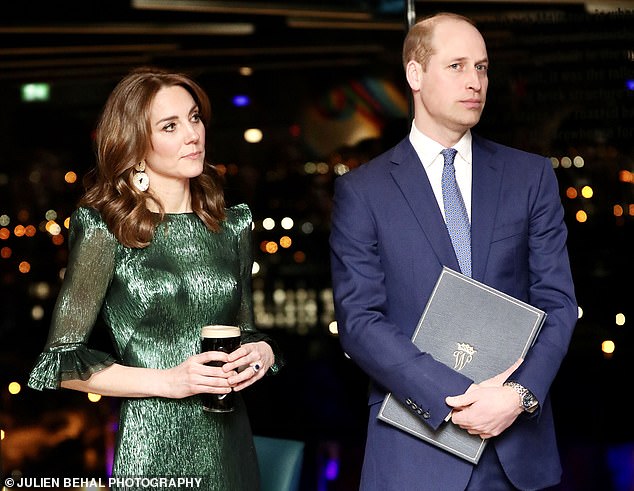 He also addressed the guests from the worlds of sport, film, television and the armed forces in Irish, calling them ‘dhaoine uaisle’ – ‘Ladies and Gentlemen’.

‘Ireland is a country that we have both heard so much about, so we are really excited to be here with you to see it first-hand for ourselves,’ the duke said.

‘In coming to the Guinness Storehouse, we are retracing the footsteps of my grandmother, who was shown how to pour the perfect pint here in 2011.

‘Ladies and Gentlemen let me tell you it is not often that I find myself following the Queen to a pub.’ 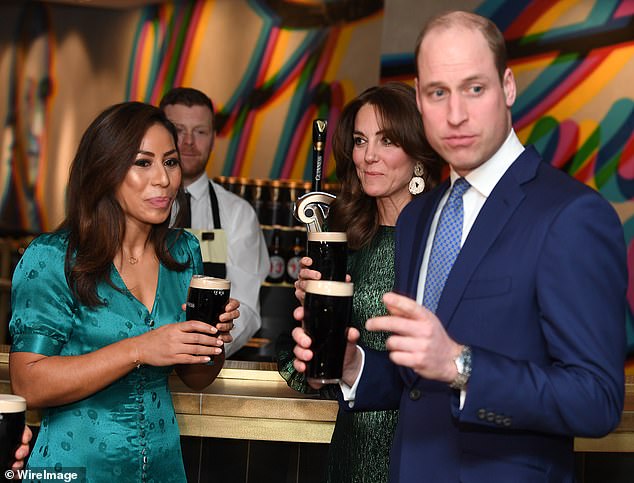 During the reception William and Kate were introduced to groups of guests, from film and TV, sports, sustainability and environment, creative and cultural Ireland, education and research, the charity sector and uniformed services.

The duke and duchess’s outing came after a day of formal engagements to launch their first official visit to Ireland, nine years after the Queen became the first British monarch to visit the country since its independence.

Related posts:
March 6, 2020 World News Comments Off on Prince William has only had 'two sips' of Guinness so far in Ireland
Celebrity News:
Jamie Lee Curtis Says a Minor Plastic Surgery Led to Her 10-Year Opioid Addiction
Mr Motivator held at gunpoint in terrifying home invasion in Jamaica
Dianne Buswell ‘would love to be with Joe forever’ as she talks marriage plans
Johnny Carson Said His Final Goodnight as Host of ‘The Tonight Show’ 30 Years Ago
Peter Pan's Arc in 'Rescue Rangers' Compared to Bobby Driscoll Tragedy
Recent Posts