Alexei Navalny’s legal woes continued today as he was hauled into a Moscow court yet again, this time to face charges of defaming a World War II veteran.

The opposition leader is in the dock for lashing out at Putin supporters – including the 95-year-old veteran – who appeared in a pro-Kremlin video last year, describing them as ‘traitors’ and ‘the shame of the country’.

Navalny, who was earlier this week sentenced to two years and eight months in prison in a separate case, slammed the new hearing as a ‘disgusting PR trial’ intended to undermine the Kremlin’s most prominent critic.

‘This trial was conceived as some kind of PR trial, because the Kremlin needs headlines, ‘Navalny slandered a veteran’,’ he said in the courtroom today. 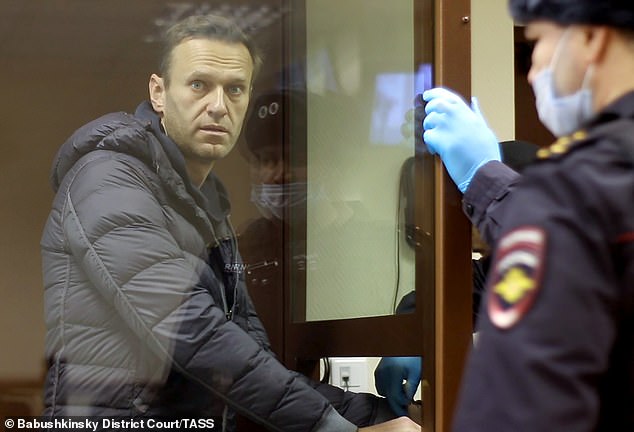 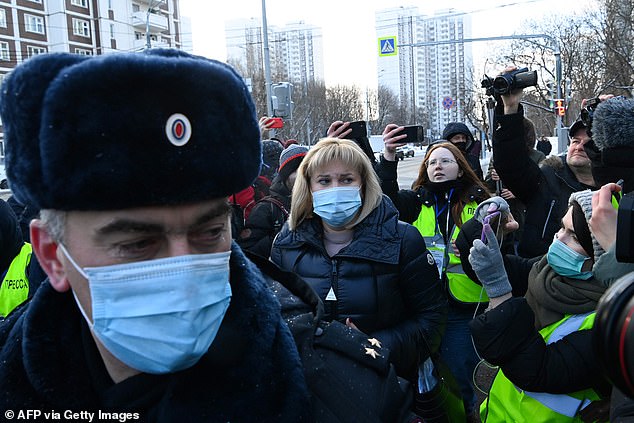 Navalny’s lawyer Olga Mikhailova arrives at court today, three years after the Kremlin critic was given a prison sentence relating to a 2014 fraud case

Russia’s investigative committee launched the defamation probe last June after Navalny had slammed the ‘corrupt stooges’, ‘people without conscience’ and ‘traitors’ who appeared in the pro-Kremlin video.

The video was a political ad for a package of constitutional reforms signed by Putin last year which could allow him to stay in power until 2036.

Authorities accuse Navalny of ‘denigrating the honour and dignity’ of the elderly World War II veteran who featured in the video.

The charge carries a maximum penalty of two years in prison, but the court was not expected to pronounce a verdict on Friday.

Legal pressure has been mounting on Navalny and his allies since he returned from Germany three weeks ago, after spending five months there recuperating from a nerve agent poisoning that he blames on the Kremlin.

On Tuesday, Navalny had a suspended sentence from a 2014 fraud case converted into real jail time after he was found guilty of flouting the terms of his parole.

Navalny ridiculed the charges and said he could hardly have checked in with prison officers while he was in a coma in Berlin. 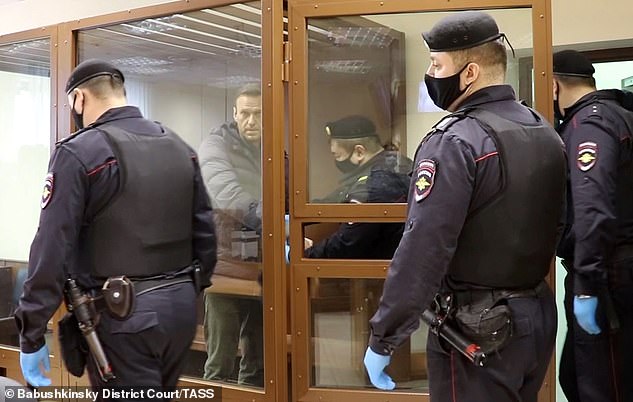 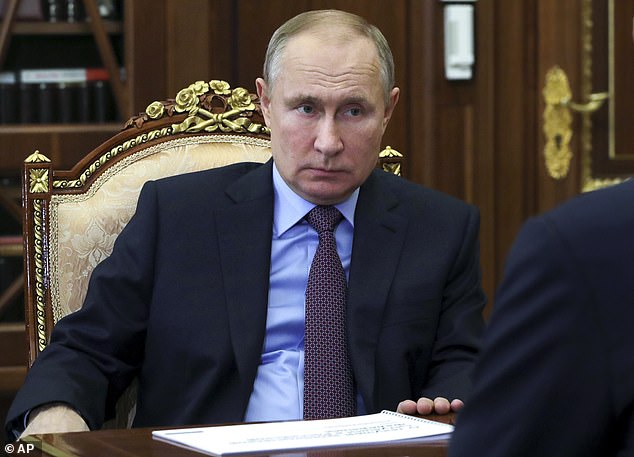 His jailing has triggered massive protests across Russia in one of the largest shows of discontent in years, and has also led to a wave of condemnation from the West.

President Biden issued a strong condemnation of Putin on Thursday in a symbolic turn away from Donald Trump’s more ambivalent stance towards Moscow.

‘The days of the United States rolling over in the face of Russia’s aggressive actions – interfering with our election, cyber attacks, poisoning its citizens – are over,’ said Biden.

‘We will not hesitate to raise the cost on Russia and defend our vital interests and our people.’

But Russian authorities, who belittle Navalny as ‘the blogger’ and deny involvement in his poisoning, have rejected the criticism from the US and Europe.

Thousands have been arrested during pro-Navalny protests since he returned to Moscow in January, with his wife and brother among those facing charges.

Borrell said ahead of the meeting that he would raise the issue of Navalny’s detention and the police crackdown on protesters. 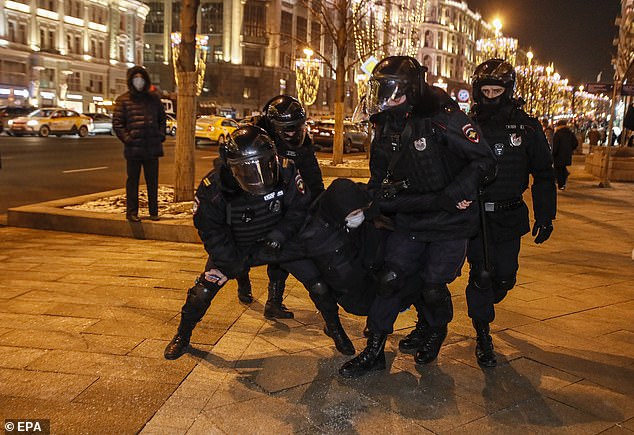 Thousands of Navalny supporters have been arrested amid nationwide protests (pictured, one of them is detained in Moscow on Tuesday)

‘Our relationship is indeed in a difficult moment,’ Borrell said on the first visit to Moscow by a senior EU envoy since 2017.

‘Certainly our relations are under severe strain and the Navalny case is a low point,’ Borrell said.

In comments to Borrell at the start of the talks, Lavrov said Russia was ‘ready to answer any questions’.

‘The main problem is a lack of normalcy in relations between Russia and the EU, the two largest players in Europe,’ he said.

Even before the Navalny saga, relations were strained over claims of Russian interference in Western elections and the Salisbury poison plot in 2018.

Heavy sanctions have been in place since Russia annexed Crimea in 2014 in a move not recognised by most of the international community.