That "creeping assumptions" of senior bureaucrats were behind their choice of private security staff guarding returned travellers in Victorian hotel quarantine was suggested by counsel assisting the Coate inquiry. But there is another possibility: the assumptions were not "creeping" and there was no active choice. 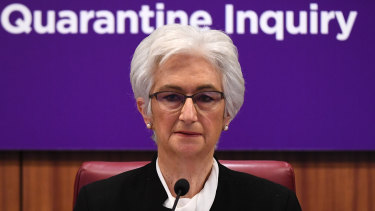 Former judge Jennifer Coate is due to deliver her report in November.Credit:Getty

Rather, the employment of security guards was the outcome of "cast-iron" assumptions, making it so inevitable that no discussion about choice was needed. Private security guards were less a choice between different options than a given certainty. It was a non-decision that became a fateful decision – strange as this may seem to the general public.

Contracting out became central to the playbook of bureaucracies after the new public management (NPM) theories in the 1990s gripped Australian public services. NPM was the handmaiden of the neoliberal economics that marked the advent of Jeff Kennett’s and John Howard’s leaderships.

The idea was that the private sector – profit-making firms and NGOs – could run things more efficiently and cheaply than governments.

It was also an indirect way of breaking up those pesky, unionised workforces within governments, such as the Commonwealth Employment Service or the tramways employees.

So throughout the Kennett and Howard eras, most public services, from electricity to prisons, from childcare to aged care, were privatised, often through contracting-out processes.

According to the gurus of the NPM movement, government’s new role in service delivery was to "steer not row". And when Labor governments – Rudd in Canberra and Bracks in Victoria – were returned, they apparently saw no reason to abandon NPM.

Contracting out went hand in hand with the use of another less well-known but very powerful strategy, the elevation of the content-free manager.

NPM disliked specialist managers, those who were either trained in their field or very experienced, or both. Professionals such as doctors and social workers who were also specialist managers held other loyalties, beyond holding to the financial bottom line of their employing organisation.

They often avowed a commitment to departmental clients first; they networked with colleagues beyond the department (bringing the outside inside) and they supported educational and training budgets, believing that improving service quality was the priority. Above all, specialist managers believed that the devil hid in the detail.

Over the years the trend has been that specialist managers have been replaced with generalists, often referred to content-free managers. It must be counter-intuitive to those who were not onlookers of this war between the specialists and generalists to believe that a dominant logic could adopt the view that, all other things being equal, knowing very little, or sometimes nothing, could be an advantage.

But this is what happened. Freed from special interests and special pleadings, content-free managers were thought freer to carry through the policies of government more efficiently and effectively.

Many specialist managers and potential managers were sidelined, as we have seen in the Victorian case of the DHHS’s Chief Health Officer Brett Sutton, who, despite his serious legislative powers and central role in keeping Victorians safe, was refused a senior management role in his own department and effectively relegated to middle management.

The Coate inquiry has noted that the apparent consensus of Victorian departmental heads was that logistics rather than infection control was the priority in hotel quarantine and this becomes easier to understand if the ideology of NPM is understood.

In a pandemic, the devil does indeed live in the public health detail – but public health staff were so far down the management pecking order to the point where their policy voice was muted and where their Chief Health Officer had no effective management say in the hotel quarantine arrangements.

The DHHS was not always like this. After the Kennett reforms, disputably, had amalgamated the previously separated departments of health and community services, creating a mega-department, most divisions were still run by a specialist manager. Public Health and Acute Health were two of these divisions. I know this because I worked with the then DHHS secretary John Patterson, on a project to try create commonalities between these disparate divisions around their common interest in case management.

But in subsequent years, the creeping assumptions of NPM took hold, claiming that content-free management in general (and MBA holders in particular) were superior heads of divisions. Now, DHHS seems to the outsider to be an inward-looking oligarchy, devoted to replacing its own with its own and to keeping potential executive managers such as Professor Sutton at bay and well under control.

It is too early to say whether the tide has turned again towards specialist managers, but in the final deliberations of the Coate inquiry, the reasons for the banishment of specialist managers in the DHHS and the cast-iron, twin assumptions that contracting out and content-free management are always the best, need close examination.

Jan Carter is a former head of policy and research at the Brotherhood of St Laurence and a professor at the universities of Melbourne and Deakin. She undertook a wide range of projects and reviews for the DHHS, including for the Cain, Kennett and Bracks governments.

Related posts:
October 4, 2020 World News Comments Off on Quarantine ‘non-decision’ stemmed from flawed bureaucratic philosophy
Celebrity News:
Olivia Jade on YouTube Return After College Bribery Scandal: I Just Want to Do What I Love
Jessica Mulroney Shares Text Messages with Sasha Exeter to Exonerate Herself After Last Year’s Controversy
Dolly Parton Mourns Passing of Brother Randy Two Days After Her Birthday
'RHOC’ Star Shannon Beador Says She Got Bad Cosmetic Work
Bridgerton's diverse cast was found using an 'inclusion lens'
Recent Posts
This website uses cookies to improve your user experience and to provide you with advertisements that are relevant to your interests. By continuing to browse the site you are agreeing to our use of cookies.Ok