A so-called “COVID lag” has seen demand for perinatal support spike, as mothers who endured pregnancy during the pandemic now welcome babies into the continuing health crisis.

Maternal mental health organisation Gidget Foundation Australia has supported 122 per cent more people this year, while calls to the national helpline for women suffering perinatal depression and anxiety doubled in 2020. 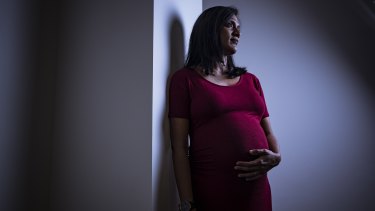 Dinushka O’Neill had two serious scares during her pregnancy with her first baby, and is urging women to seek help if they experience perinatal anxiety.Credit:Chris Hopkins

Arabella Gibson, CEO of the non-profit Gidget Foundation, said women who gave birth during the pandemic felt a lot of fear.

“They’re fearful for the children they’ve brought into the world, for their family and for all the things they cannot control,” she said.

”They feel a fair amount of shame because they might feel somebody else is doing it tougher than them, so who are they to be feeling that way?

“And they’re feeling they’ve just had baby so they’re meant to feel a certain way … because having a baby is a time of great joy and happiness.”

Many women had delayed seeking mental health support for this reason, Ms Gibson said, but due to what her organisation was calling the “COVID lag”, they were now seeking support in the largest numbers the national group’s 55 clinicians had seen.

“Perinatal support services are going to be stretched for quite some time,” Ms Gibson said.

Ms Gibson was in Melbourne on Monday for the launch of the NSW-based group’s first Victorian telehealth and in-person clinic, to be run out of the Jean Hailes for Women’s Health Clayton centre.

Calls to to the national helpline for women suffering perinatal depression and anxiety, PANDA, doubled in 2020, prompting Federal Health Minister Greg Hunt to announce $13.5 million in extra support for the crisis service in late October.

He noted the intensity and duration of parental mental illness had both increased, and 43 per cent of the extra call volume was coming out of Victoria.

In the same week as that announcement, Dinushka O’Neill, who works in fundraising at Jean Hailes, found out she was pregnant with her first child with husband Shaun. Everyone kept telling her it was a beautiful time in a woman’s life.

‘They feel a fair amount of shame because they might feel somebody else is doing it tougher than them, so who are they to be feeling that way?’

While this was no doubt true, Ms O’Neill found out it could also be extremely stressful.

She suffered a subchorionic haematoma (clotting which caused bleeding and made the couple fear they were losing their baby) and later breathing difficulties, which doctors thought could have been a blood clot.

She said she started to wonder what she had done wrong.

“It put me in that position where even the position I slept in, I’d go, ‘Oh, have I done something wrong?’ or, ‘Have I lifted something heavy or turned the wrong way?’ You always tend to blame yourself.”

Being cut off from her mother, who is in Sri Lanka, and not being able to have face-to-face clinical meetings until well into the pregnancy due to COVID protocols added pressure, Ms O’Neill said.

“I have a few friends who have gotten pregnant through this period and they are also anxious,” she said.

“I think the whole thing of not being able to see someone in person until 20-something weeks and not knowing is the baby still alive, is everything OK, is very hard.”

Ms O’Neill, who is due to give birth next month, feels fortunate to know about services available, via her work, and urges others if they’re feeling down to speak up.

“Get help, because mental health can spiral down into a very, very bad place,” she said.

“I don’t want to medicalise feeling a bit overwhelmed, but what COVID has taught us is that in uncertain times, we need to rally around and to communicate, and to make sure people are connected. That’s what this service is about.”

For appointments and inquires, call Gidget Foundation Australia 1300 851 758. Other support can be obtained through PANDA.

Stay across the news you need to know related to the pandemic. Sent Monday and Thursday. Sign up here.