A Saudi Arabian judoka faced off against her Israeli opponent at the Tokyo Olympics today – defying pressure to follow the lead of two other Muslim athletes who boycotted their bouts.

Tahani al-Qahtani fought against Raz Hershko in the women’s 78kg category at Tokyo on Friday, before the pair clasped hands and raised them in the air as a show of solidary when the bout was over.

Questions had swirled over whether the bout would go ahead after two Muslim athletes in the men’s 73kg competition walked out rather than get in the ring with an Israeli opponent. 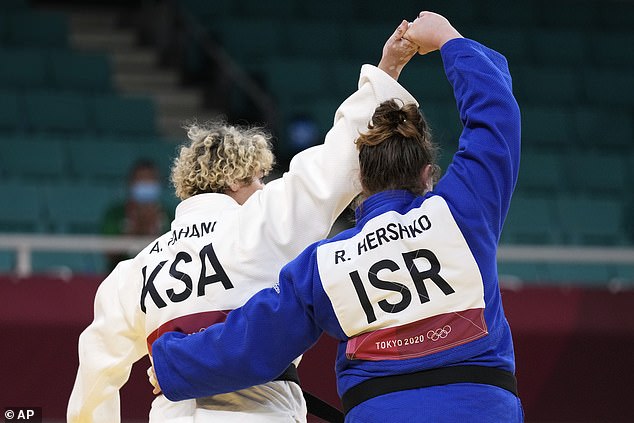 Saudi Arabian judoka Tahani al-Qahtani stepped up to fight Israeli Raz Hershko in the women’s 78kg even in Tokyo on Friday, defying pressure for a boycott 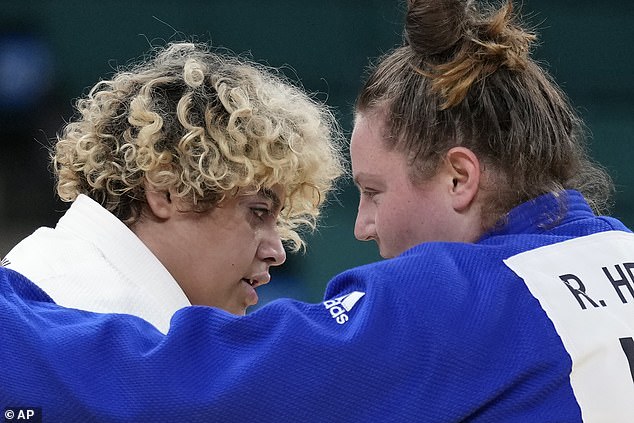 After the bout the pair clasped hands and raised them in the air in a show of solidarity, after two Muslim athletes quit the men’s contest rather than face an Israeli opponent

Algerian fighter Fethi Nourine was the first to quit after the competition draw meant he would have been forced to fight Israeli Tohar Butbul on his way to the medals.

Nourine was first due to fight Mohamed Abdalrasool of Sudan, with the winner of that fight guaranteed to face Butbul because of the way the seeing system works.

The Algerian quit the contest before even facing Abdalrasool, saying he didn’t want to ‘get my hands dirty’ by risking a fight with the Israeli. 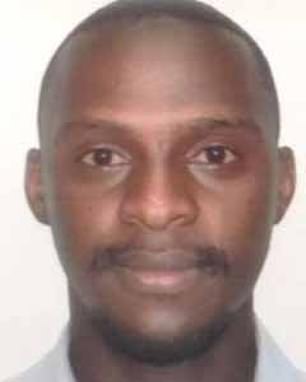 Mohamed Abdalrasool,  of Sudan, quit rather than face Israel’s Tohar Butbul in the men’s 73kg competition earlier this week

It is the second time Nourine has quit a contest because Butbul was due to face him, saying it is part of a protest in solidarity with Palestinians.

He was subsequently suspended by the Algerian Olympic Committee and judo’s governing body, and send home from Tokyo.

His withdrawal meant Abdalrasool progressed automatically to fight Butbul, but then he also withdrew from the contest.

Abdalrasool never made the reasons for his withdrawal explicitly clear, though it is thought he also did not want to fight the Israeli.

That left questions hanging over Al-Qahtani and Hershko’s fight, which ultimately went ahead on Friday.

Hershko won the bout by ippon – the judo equivalent of a knockout blow – after just one minute and 44 seconds.

The pair bowed to one-another after the bout, before Hershko advanced across the ring and the two fighters shook hands.

Hershko then lifted the Saudi’s hand in the air in a show of mutual respect.

In her next bout, Hershko face off against Japanese opponent Akira Sone who beat her by ippon after three minutes.

Sone went on to claim gold in the event – Japan’s ninth in judo alone – beating Idalys Ortiz of Cuba by ippon after almost nine minutes in the ring.

Al-Qahtani’s show of solidarity with Hershko comes amid shifting alliances in the Middle East, with a number of Muslim countries breaking with a decades-long boycott of the country by normalising relations.

Traditionally, Islamic and particularly Arab Islamic countries have refused to deal with Israel until Palestinian people are granted their own state.

But after talks spearheaded by the Trump administration, the UAE, Sudan, Morocco, and Bahrain all agreed to establish diplomatic relations and economic ties, including allowing flights between each-other’s territory.

Trump hinted at the time that Saudi Arabia was considering joining the initiative, and while this was publicly denied by Riyadh, it is thought that back-door diplomatic talks have been taking place between the pair.