A 40-foot deep sinkhole has opened up in the middle of a popular Buckinghamshire playing field forcing the parish council to close the entire site.

The massive hole opened on top of a former brickworks which was filled in by army engineers to create a recreational area.

Shocked dog-walker Lesley James, 50, was stopped in her tracks when she came across the massive hole in the grass on Saturday. 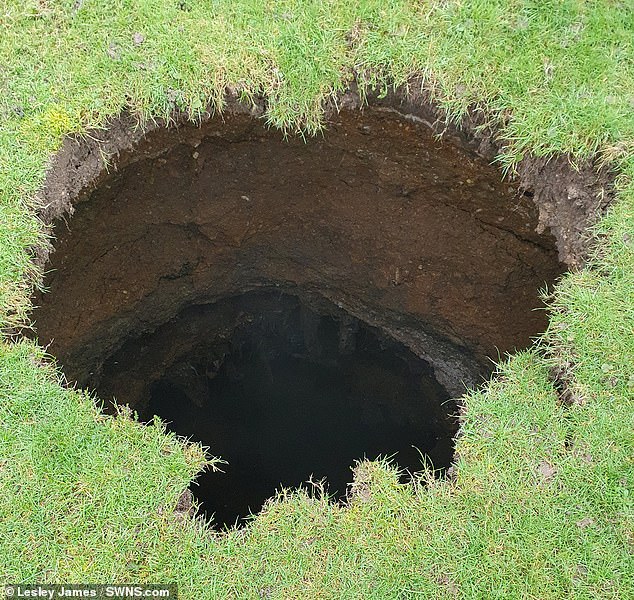 The sinkhole is believed to be at least 40ft deep and was discovered in Sappers Field, Bucks

The hole is located in the middle of Sappers Field, Wooburn Green, Buckinghamshire, and is said to be only three or four feet across but has been described as having a ‘cavern-like’ depth.

Staff from Wooburn and Bourne End Parish Council arrived to inspect the hole the morning it was discovered.

The council has now cordoned off the whole park until it can come up with a solution. It also hopes to install security fences around the hole.

Parish councillor Malcolm Silver said the sinkhole is continuing to grow – and that it will take a ‘long, long time’ to fix it.

He said the council has no certain idea of what caused it, but added: ‘The site was originally a brickworks, and after the war it was filled in by sappers – soldiers who did not have jobs.

‘However, there is running water underneath it, and we think that over time that water has washed away all the stuff used to fill in the site. 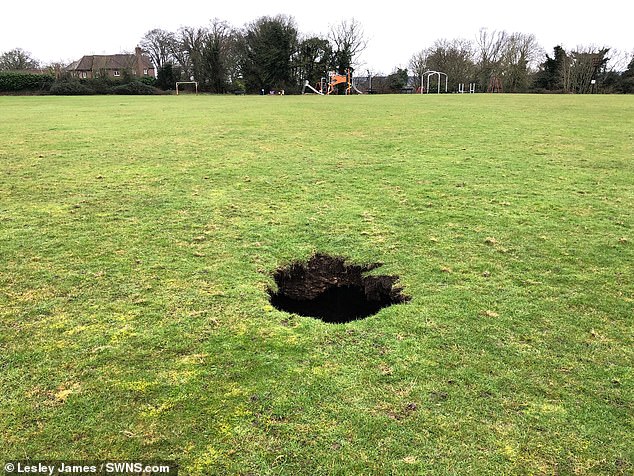 The sinkhole has made a popular destination for children, joggers and dog walkers unusable

‘There is now a big cavern under the field – which is today used as a park, with a football field and playground.

‘We think it is now bigger than 40 foot deep. We threw something down it to see how long it would take to hit the bottom, and it took three seconds – so it is definitely growing.

‘It’s probably a combination of the recent wet weather and the fact there were three old wells on the site that has led to the sinkhole.

The six-acre field was created by a group of Royal Engineers on the site of an old council landfill which had featured a number of old wells.

Lesley James, who lives six miles away in Marlow, but is temporarily staying in Wooburn Green, said: ‘I thought it was a large rabbit hole at first.

‘It was only when I went right up to it that I saw how much the ground has given way.

‘It was a bit scary, because I didn’t know if there was anything underneath where I was standing.

‘I could see that the ground was stable on the other side, because I could see a ridge supporting it – but I thought, ‘Oh god, what if I’m standing on nothing?’.’

Lesley added: ‘Luckily me and the dog were the only ones in the field at the time.

‘I put a wooden pallet over the top of the hole to warn other people, until the experts came along.’

Lesley said she had ‘no idea’ what may have caused the sinkhole to open up, but said it may have given way after all the recent rain.