Jakarta: Members of the ASEAN bloc of countries have reportedly urged the United Nations not to endorse a freeze on arms sales to Myanmar.

A report by Benar News, an affiliate of the US-funded Radio Free Asia, quoted a Liechtenstein diplomat as saying the nine wrote a letter to the nations sponsoring a draft UN General Assembly resolution on Myanmar, where a February 1 coup has sparked mass protests and a bloody crackdown by the military junta. 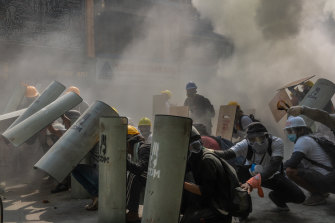 Protesters defend themselves with makeshift shields during clashes with riot police in Yangon in February. Hundreds of people have been killed by the military junta since the February 1 coup.Credit:Getty Images

The news outlet said the letter asked for a sentence calling for “an immediate suspension of the direct and indirect supply, sale or transfer of all weapons and munitions” to Myanmar to be removed.

The letter was sent on behalf of nine out of 10 members of the Association of South-east Asian Nations, excluding the 10th bloc member Myanmar, Benar News reported.

It quoted Georg Sparber, deputy permanent representative at Liechtenstein’s mission to the UN, as saying there was “no reason given” for the request. Benar News did not obtain a copy of the letter.

Liechtenstein’s mission did not immediately respond to an emailed request for comment.

A spokesman for Indonesia’s Foreign Ministry said he was unaware of the letter and referred Reuters to ASEAN. A spokesman for ASEAN did not immediately respond to requests for comment.

ASEAN is leading the diplomatic effort to end bloodshed in Myanmar and promote dialogue between the junta and its opponents. It’s unclear why it would object to the proposed arms embargo.

A planned vote on the non-binding resolution by the assembly was suspended last week, with some diplomats saying the delay was to rally more support.