Singapore: Over coffee at the grand Atlas dining room in Singapore’s Bugis district, Aaron Olivera lays out his vision.

He wants to build a nuclear-powered ship dedicated to science, ocean exploration and climate change awareness, with liquid metal walls, robotics, deep sea water creatures in tanks, floors opening under your feet and some of the smartest minds on the planet on board.

An artistic impression of the nuclear-powered Earth 300 ship.

A vessel, he says, that “captures the spirit of Silicon Valley, SpaceX, Davos, the Olympics and Disney”.

If that sounds a little far-fetched then Olivera, a 42-year-old Gibraltar native who now calls Singapore home, makes no apologies.

He plans to launch the emissions-free, $700 million, 300-metre long megayacht christened Earth 300 in 2025, initially run on green fuels and eventually with a molten salt reactor.

It would have 160 scientists on board at a time, working in 22 laboratories that would slide in and out of an eye-catching “science sphere” on the deck, as well as 20 “experts in residence” in different fields, 20 students and 165 staff.

How is he going to pay for all this and make a buck himself? Apart from a mix of private investment, donations and old-fashioned loans to get the ship made and in the water, there would be 20 VIP suites on board aimed at the ultra rich. The price structure is not set yet, Olivera says, but it won’t be cheap. While it’s been reported that a 10-day trip would cost $3 million, the figure is more likely to be about $1 million per person.

Olivera has sold an apartment as part of the $5 million that has already been sunk into the venture, which he announced at a project launch at the Fullerton Bay Hotel’s Clifford Pier restaurant overlooking Singapore’s Marina Bay.

Olivera says 80 per cent of profits would go back into the science and maintains the vessel would not be a “toy for the rich”.

“It is really an opportunity for the wealthy to contribute to science and participate in science. This is not having a billionaire in a bathtub, sipping a glass of champagne,” he said.

He’s been a salesman, an event organiser for the wealthy, a restaurateur, a property developer and a capital raiser for a luxury yachtmaker, but says that after seeing the damage to the coral reef in the Maldives while trying to build a hotel there in 2010, his attention turned to the environment. 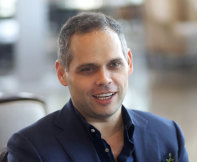 He has since assembled a team of experts from superyacht designers to microbiologists, space and marine scientists and smart city planners to help make his blue sky vision a reality.

The project has the backing of Martin Yates, Dell Technologies’ chief technology officer for international smart digital cities, who hopes the ship will one day have such state-of-the-art science as quantum computing on what he sees as “a space station on Earth”.

Simon Redern, the dean of the college of science at Nanyang Technological University in Singapore, said the ”exciting thing about this is it promises a platform for researching the oceans”.

“If you remember the Malaysian Airlines disappearance into the Indian Ocean, that led to a huge survey of the bottom of the ocean and we demonstrated we knew very little about what was there,” he said.

“It shows how much there is to learn especially when the world is changing so rapidly in terms of climate and all the related effects of that. Any opportunities we can have to learn more about what is beneath the surface of the sea is important.”

Olivera is adamant that this is not a pipe dream, even if it sounds like one. “It’s going to float in the water, it’s not a ship that’s going to navigate on the rings of Saturn. It’s actually very doable,” he said.

Not shy about what he wants to achieve, he hopes it will appeal to environmentally minded billionaires such as Jeff Bezos, Elon Musk and Bill Gates, all of whom can afford a ticket to a VIP suite many times over.

“I really would like Elon and Jeff and Bill to come into the project because they are the true planetary vanguards,” he said. “I hope to get them involved.”

What in the World

A note direct from our foreign correspondents about what’s making headlines around the world. Sign up for our weekly newsletter here.

Related posts:
May 4, 2021 World News Comments Off on ‘Space station on Earth’: plans for nuclear-powered superyacht for billionaire travellers
Celebrity News:
Caitlyn Jenner Claims Her Kids Were ‘Scared’ For Her When She Revealed Her Bid For California Governor
The young mum-to-be treated like a criminal for having a dying foetus
Ivanka Trump Hits Her Son, 5, In The Face With A Surfboard During Private Mother’s Day Lesson — Pics
Michael B. Jordan Reveals His Plan For Having Kids Amid Lori Harvey Romance — Watch
'Prodigal Son' Canceled at Fox After Two Seasons
Recent Posts