Mikaela Spielberg, 24, has broken her silence over claims that her director father and his wife, actress Kate Capshaw, had been left ’embarrassed’ by the revelation she was working in the adult film industry.

The adopted daughter of Spielberg has denied that her parents are embarrassed, instead insisting they were ‘expecting’ her to go down the unconventional career path. 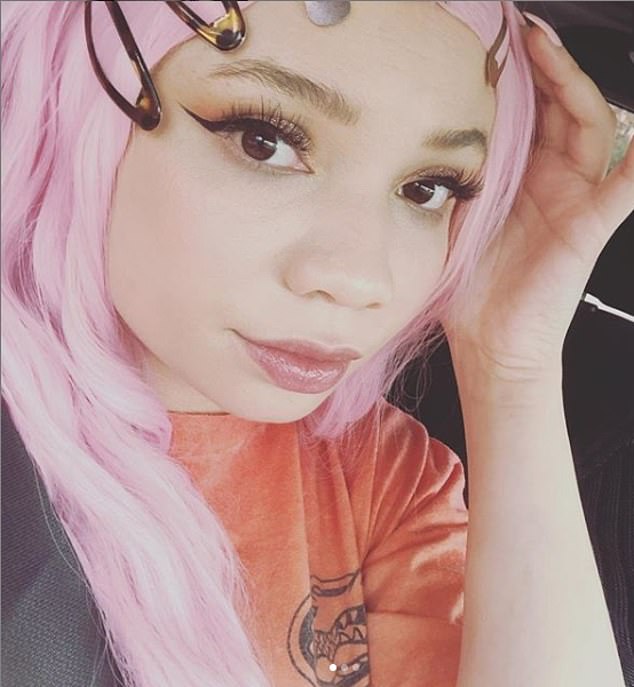 Mikaela Spielberg, 24, (pictured) has broken her silence over claims that her director father and his wife, actress Kate Capshaw, had been left ’embarrassed’ by the revelation she was working in the adult film industry

‘My parents – despite what people have written – aren’t embarrassed, they were actually kind of expecting it to be my career… some sort of outsider art… or taboo art, because they’ve always known that I was a little bit neurotic,’ she told The Sun.

‘That’s not to say all performers are neurotic…just the kind of performer I am – they’ve always known that whatever I wanted to do in life I probably was going to do it whether they liked it or not.’

Mikaela even described her parents’ ‘relief’ over her career choice.

‘So it kind of felt like a little bit of a relief. It was like they were preparing themselves to get the news for this and they’re not sad for me and my choice of career,’ she said.

‘I’m not sad for them. People shouldn’t be sad for them. That’s the one big thing – people are like, ‘I feel sorry for your parents’. Nobody here is a victim.’ 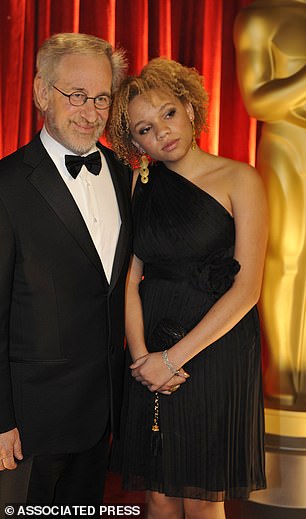 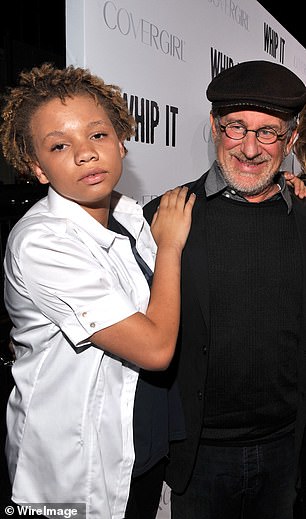 Mikaela is the adopted daughter of director Spielberg (pictured together in 2009) and his wife, Kate Capshaw. She insisted her parents ‘were actually kind of expecting it to be my career’ and even described her parents’ ‘relief’ over her career choice

Her comments come amid a rocky few weeks for the daughter of Academy Award-winner Spielberg.

She told The Sun at the time that she broke the news to her famous parents over FaceTime.

‘My safety has always been a number one priority for them,’ said Mikaela.

‘I’m doing this, not out of an urge to hurt anybody or be spiteful about it, I’m doing this because I want to honor my body in a way that’s lucrative.’ 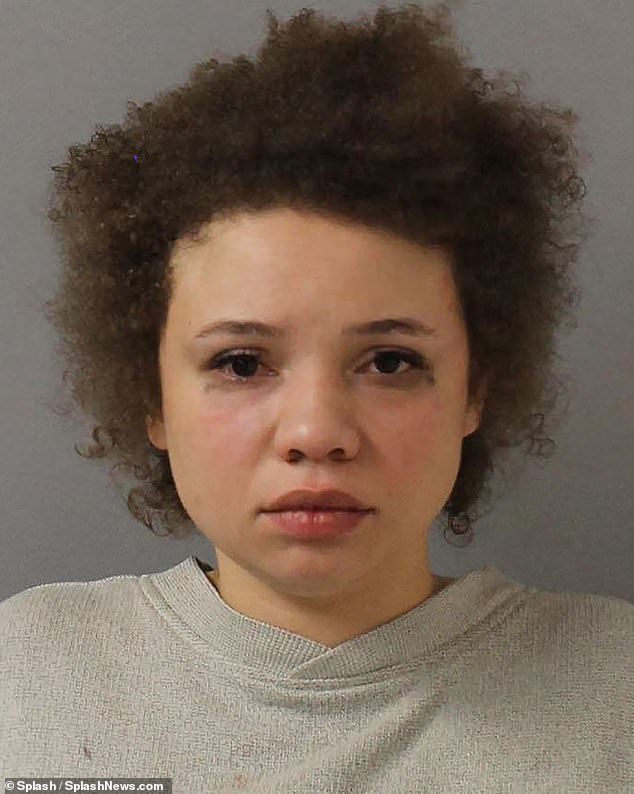 Mikaela (pictured mugshot) also insisted she is closer than ever to her fiancé Chuck Pankow, 47, after she was arrested last week after she allegedly became violent and threw things at him during an argument

Sources claimed that while Spielberg and Capshaw support their child, they were also ’embarrassed’ about her decision to pursue work in the world of adult films.

‘Outwardly, Steven and Kate – who are the most evolved parents in the world and love their kids beyond all measure – have always been supportive of Mikaela and try to understand her,’ a family friend told The Sun last month.

‘Obviously, though, they’re embarrassed by her sudden public admission of entry into the sex worker world.’

A week later, Mikaela was then arrested and charged with domestic assault causing bodily harm against her fiancé Chuck Pankow, 47, after a late-night argument turned physical.

Officers were called to reports of an incident in Nashville, Tennessee that Mikaela had thrown objects at Pankow, with one object reportedly striking his hand and leaving him with a visible injury.

Pankow refused to prosecute over the alleged domestic assault, but authorities are prosecuting on his behalf.

He brushed off the incident as a ‘misunderstanding’ and insisted the couple are ‘closer than ever’.

‘I’m really hoping this thing is a huge misunderstanding and I really hope they drop it,’ Pankow, a pro darts player, told The Sun. 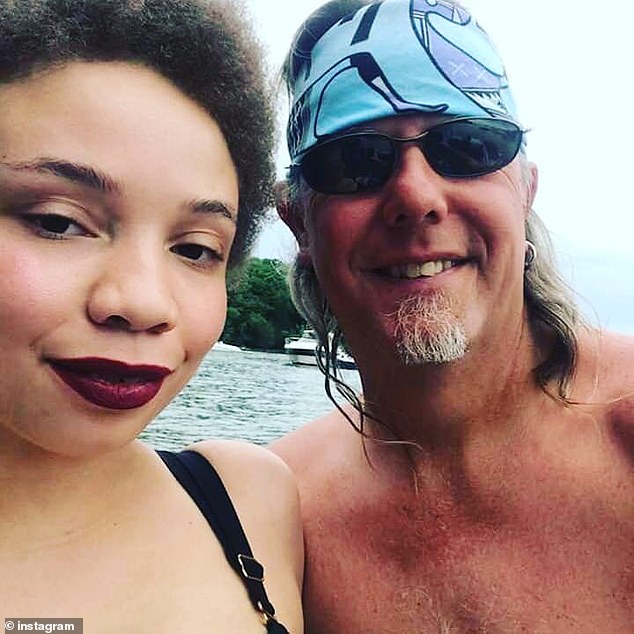 Pankow (pictured above with Mikaela) refused to prosecute over the alleged domestic assault, but authorities are prosecuting on his behalf. He brushed off the incident as a ‘misunderstanding’ and insisted the couple are ‘closer than ever’ 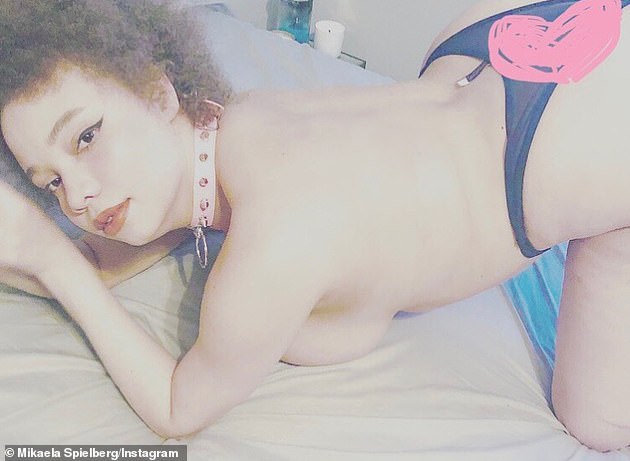 Mikaela told her 76,000-plus Instagram followers on Monday that she ‘just celebrated a week sober’ following the incident

Mikaela told her 76,000-plus Instagram followers on Monday that she ‘just celebrated a week sober’ following the incident.

‘Navigating my own fears like a pro who somehow still knows nothing,’ Mikaela shared on her private account, according to Page Six.

‘Send me good loving energy y’all and I can try to put that into the world. I’ll still be a flirty odd duck at the end of the day.

‘I’m really trying to improve my connection to my body and manifest personal safety and genuine caution as it relates to me,’ she added.

Mikaela admitted that her parents had voiced concerns about her drinking in the past.

‘Before I got sober, they were like, “We’re scared about your drinking. I’m more scared that you’re going to die from that,”‘ she told The Sun.

‘They also were thinking about the career stuff. They were like, “As long as those two things are separate, we’re not embarrassed by you.”

‘In fact, they said that we’re not surprised because, “You were such a free spirit that your choice in career doesn’t surprise us at all’.’

She described Pankow as ‘my rock’ and said it was ‘exciting’ to have him by her side as she started on her new business venture.

‘A conversation we had I asked her, ‘But I feel you have so much more to offer the world than t*ts and a** and she looked at me and said ‘Well why not both?’

‘So I couldn’t really argue with that.’

However, she has since removed her clips because she wants to obtain her Tennessee adult entertainment permit before sharing any more content.

And while she says she is open to trying ‘fetish work’, Mikaela insists that she will not have sex with another person on camera out of respect for her Pankow. 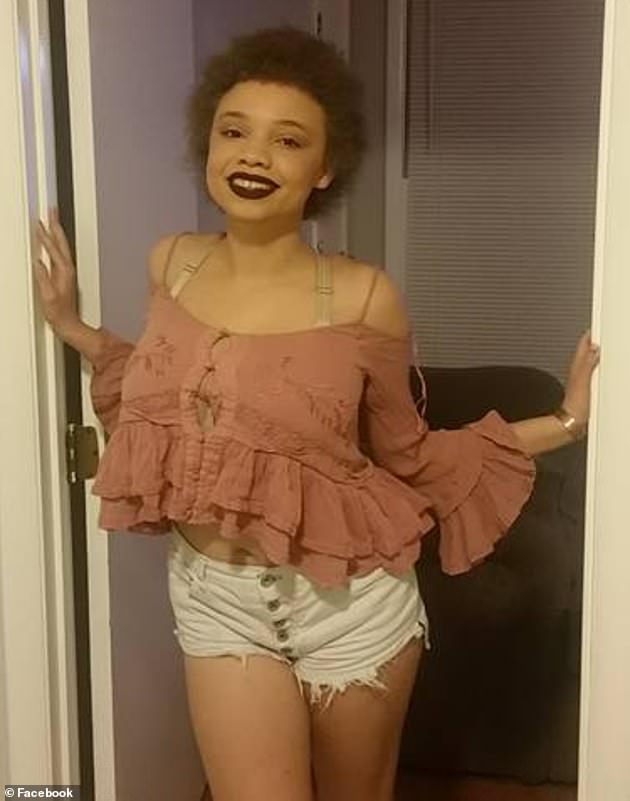 Her videos have featured titles like ‘I give my huge natural breasts some love and care with rose tea oil’, and ‘Huge breasted woman pleasures herself in calm environment’.

Her goal now is to make enough in the industry so she’s ‘not tied down financially by things’.

‘I can’t stay dependent on my parents or even the state for that matter — not that there’s anything wrong with that — it just doesn’t feel comfortable for me,’ she said.

Forbes has estimated that her father’s net worth is somewhere between $3.7billion and $6.08billion.

In his illustrious Hollywood career, he’s directed and produced more than 100 feature films, including Jaws, ET, Jurassic Park, Schindler’s List, Saving Private Ryan, The Goonies, Indiana Jones, Hook, Catch Me if You Can, and The Post. 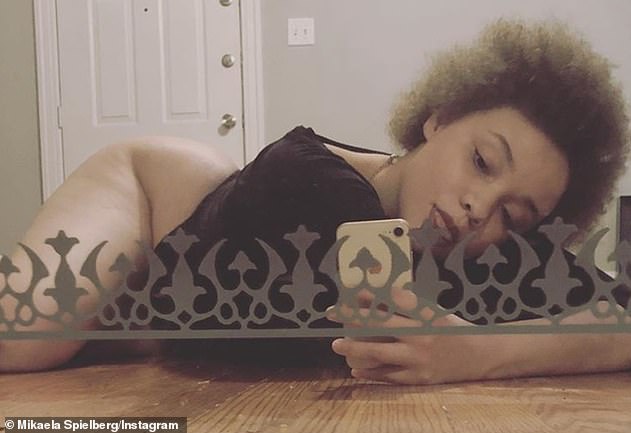 Over the past few years, Mikaela has struggled with anorexia, borderline personality disorder, and alcoholism, all of which she says are the result of childhood sexual abuse

She has previously said that as a child she was ‘spoiled, but responsibly’ and her parents raised her to understand the value of hard work, human dignity, and how poverty impacts the world.

Mikaela noted that she and her dad were close, describing him as an ‘angel’ who loves that she knows her own mind.

But she started to develop issues as she got older, attributing her problems to abuse she suffered from someone outside the family.

By 11, she had started drinking to cope with her trauma, and as a teenager she was sent to a boarding school for troubled teens.

This worsened her anxiety, depression, self-hatred, and attachment issues and she developed an eating disorder.

She continued to drink for years, and at age 21 was drinking every day. She admits she ‘almost died a couple times’.

Still, she said unequivocally that it wasn’t her parents’ fault, and they ‘couldn’t have known’ what she was dealing with.

‘I’ve had my fights and struggles with them, but it’s only out of fear that people sometimes care incorrectly because they want you to be alive and safe,’ she said.

‘They are some of the least spiteful people I know. I love them so deeply.’