Washington: A year of coronavirus pandemic saw a pot of jollof rice grow steadily more expensive in the Nigerian suburb of Nyanya. At Nyanya Market, near Abuja, Nigeria’s capital, the price of the rice that forms the base for the dish went up by 10 per cent.

A small tin of tomatoes? Twenty-nine per cent costlier. And the onions? Their price jumped by a third, according to a Nigerian research firm. 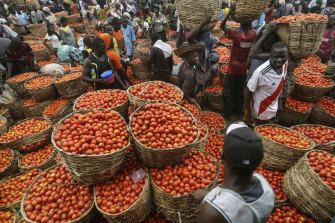 Food staples have surged in price in Nigeria, and around the world during the COVID pandemic.Credit:AP

Surging consumer food prices are a local problem – and a global one.

In Russia, an increase in pasta prices left President Vladimir Putin boiling. In India, it’s cooking oil, and in Lebanon, bread. In meat-loving Argentina, the cost of some cuts of beef has doubled, and beef consumption is at an all-time low.

The issue has made headlines the world over, including in the United States, where inflation has climbed to 5 per cent, the highest level in 13 years.

The numbers are not rising uniformly, and analysts caution that higher food prices are not always bad news. But when disproportionately increasing food costs intertwine with other economic and social factors, the results can be hard to swallow.

“Even relatively well-off people complain about how food prices are seemingly on an unstoppable tear,” said Feyi Fawehinmi, a Nigerian author and analyst based in Britain.

The UN Food and Agriculture Organisation said its food price index, which measures the global price of select foods, had in May hit highs not seen since 2011, up 40 per cent year-on-year.

A variety of factors are to blame, including a surge in orders from China, fluctuating oil prices, a sliding US dollar, and looming above all: the pandemic, and in some places, reopening.

But experts say that in the face of growing populations, globalisation and climate change, higher prices may not be a blip.

“This is telling us something about the global food system not being adequate,” said Cullen Hendrix, a professor and director of sustainability initiatives at the University of Denver.

Around the world, the way people eat could change.

SBM Intelligence has been tracking the prices of ingredients for jollof rice in Nigeria since 2015, in a “jollof index” that factors in the price of turkey, chicken, beef, seasoning, rice, tomatoes, onions and others.

In its latest quarterly report, the company announced that it had tracked an increase of 7.8 per cent in the jollof index between March 2020 and March 2021. But the price increases were unevenly spread.

Although a few markets saw small declines, others, such as Nyanya, saw the price of a potful jump by nearly 16 per cent. In Lagos, the cost of a bag of onions at a market doubled as producers complained of heists targeting the valuable vegetable.

Fawehinmi said the problem has only become worse. “I have had people I would never have expected ask me for money to buy food recently,” he said.

Nigeria has struggled economically over the past year, with low global oil prices hurting one of its key exports. Unemployment hit 33 per cent in 2020, while inflation has reached more than 18 per cent for the past two months. And “militias have taken over major farmlands and key agricultural transport corridors” in northern states, said Ese Oikhala, a researcher with SBM Intelligence.

Other factors include border closures during the pandemic, designed to stop smuggling of goods including rice, and the devaluation of Nigeria’s currency, the naira.

Russia’s signature dish – beet-red borscht, with its mixture of vegetables, meat and dairy – has been used as indicator of rising food prices in the country.

This year, that “borscht index” has gone up: Mean prices of ingredients has risen by 12 per cent since the pandemic began, according to official Russian data. But it was the price of pasta that caught Putin’s attention late last year. 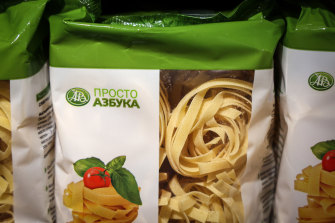 At a cabinet meeting in December, Putin complained that Russians were eating “navy-style pasta,” referring to a Soviet-era dish eaten in hard times. “This is unacceptable! With such large harvests!” the Russian President added.

At the time, pasta prices had risen by 10.5 per cent. The country subsequently imposed significant export and price controls on pasta.

Although inflation in Russia is not far higher than in the United States – hitting 6 per cent this month – rising food prices have become a major political issue, with polling from spring showing 58 per cent of Russians considered food prices the country’s biggest problem.

Russia is one of the world’s largest wheat exporters. The government has pledged to double its production of durum wheat by 2025 in an apparent bid to ensure pasta supplies.

But some experts say the Russian state’s heavy hand in the food industry is part of the problem.

Linde Goetz of the Leibniz-Institute of Agricultural Development in Transition Economies said that because Russia’s domestic food industry had been “heavily subsidised and shielded from international competition” since 2014, it was inefficient and susceptible to rising commodity prices.

In a public appearance this past week, Putin said he hoped an upcoming harvest would lower food prices.

Argentina is famous for its beef. But over the past year, lower meat consumption has threatened even the country’s famed “asado” barbecues.

The problem is price. In just a year, the price per kilogram of short rib has surged over 90 per cent, according to the Institute for the Promotion of Argentine Beef. 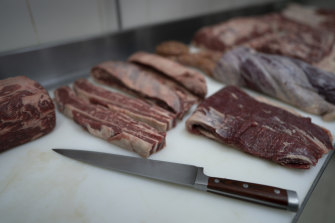 In January, meat industry sources began complaining that meat consumption had fallen to record lows in the country, with annual beef consumption down to 49.7 kilograms per person in 2020 – less than half of its peak in 1956.

“The politics of meat prices are particularly dicey in Argentina,” said Benjamin Gedan, head of the Argentina Project at the Woodrow Wilson International Centre for Scholars, noting that the government had been forced to take the drastic measure of stopping all beef exports for a month. Chinese demand had given the country a supply of US dollars.

Even with inflation, a major problem in Argentina over recent years, expected to hit 50 per cent this year, the government of Alberto Fernández has made food a priority. “Nothing worries me more than the hunger of Argentines,” Fernández said in May.

The FAO’s food index price last hit this high in 2011. Some analysts have linked sharply rising bread prices in countries including Egypt and Syria to the unrest that took place during the Arab Spring.

But the relationship between international food prices and unrest is affected by numerous factors. Global prices, like the FAO index tracks, and the price that a consumer pays are rarely in sync.

Abdolreza Abbassian, a senior FAO economist who helped devise the food price index, said that while of the factors causing rising prices may be fading in the short term, in the longer term the trend is worsening volatility, because of geopolitical rivalries and climate change.

If the food prices keep rising, those hit hardest will be “consumers in emerging markets and developing economies still wrestling with the effects of the pandemic,” the International Monetary Fund warned recently.

“Global prices affect prices in local markets throughout the world to an unprecedented degree,” Hendrix said.

With the possibility of droughts over summer in the northern hemisphere growing regions such as the United States, Hendrix said, consumers around the world could be “looking at a really, really disturbing picture moving into [autumn].”