Minneapolis: The teenager who pulled out her mobile phone and began recording when she saw George Floyd being pinned to the ground by a Minneapolis police officer was given a special citation by the Pulitzer Prizes on Friday for her video that helped to launch a global movement to protest racial injustice.

Darnella Frazier was cited “for courageously recording the murder of George Floyd, a video that spurred protests against police brutality, around the world, highlighting the crucial role of citizens in journalists’ quest for truth and justice,” the Pulitzer Prizes said.

Frazier was not giving interviews to the media, her publicist said Friday. 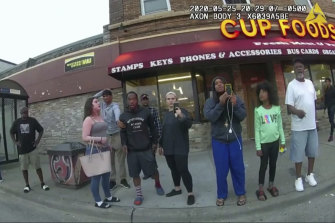 Frazier was 17 when she recorded the arrest and death of Floyd, a 46-year-old Black man, on May 25, 2020. She testified at the trial of former Minneapolis police officer Derek Chauvin that she was walking to a corner grocery store to get snacks with her then-9-year-old cousin when she saw a man being pinned to the pavement, “terrified, scared, begging for his life”.

She said she didn’t want her cousin to see what was happening so she ushered the girl into the store then went back out to the footpath and began recording because “it wasn’t right. He was suffering. He was in pain”. She kept recording even though she said she felt threatened when Chauvin ignored the cries of bystanders and pulled out his Mace as he knelt on Floyd’s neck for nine minutes, 29 seconds.

Her video, which shows Floyd repeatedly saying he couldn’t breathe before going limp, was posted to Facebook hours after it was recorded, sparking outrage in Minneapolis and beyond. It was also a prominent piece of evidence in Chauvin’s trial. Chauvin was convicted in April of second-degree unintentional murder, third-degree murder and manslaughter. He will be sentenced June 25. 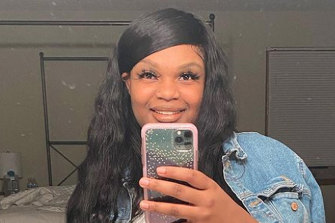 It’s unusual but not unprecedented for the Pulitzer Board to award citizens who capture news events; the famous photo of a firefighter cradling an infant after the 1995 Oklahoma City bombing was taken by Charles Porter IV, a bank credit officer, and distributed by the AP.

Clark said the special citation that Frazier received recognises exceptional work that falls outside specific award categories. The honour puts Frazier on a list with Aretha Franklin, Bob Dylan and the staff of the Capital Gazette in Annapolis, Maryland, for their response to a 2018 shooting in their newsroom.

During her testimony at Chauvin’s trial, Frazier told jurors that she sometimes wishes she had done more to help Floyd. She said she looks at her father and other Black men in her life and thinks about “how that could have been one of them”.

“It’s been nights I stayed up, apologising and apologising to George Floyd for not doing more, and not physically interacting and not saving his life,” she testified, adding of Chauvin: “But it’s like, it’s not what I should’ve done, it’s what he should’ve done.”

The three other officers involved in Floyd’s arrest are scheduled to face trial next year on aiding and abetting counts. All four officers are also charged with violating Floyd’s civil rights.

The AP photographers who won in the breaking news category captured the drama and raw emotion of the protests that roiled US cities after Floyd’s death.

AP photographers captured close-up images of demonstrators with fists in the air and sometimes violent conflicts with police. One widely published photograph by Julio Cortez on the night of May 28 in riot-torn Minneapolis shows a lone, silhouetted protester running with an upside-down American flag past a burning liquor store. 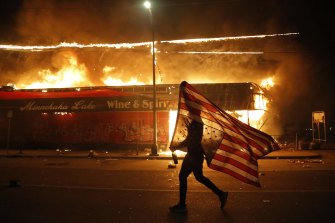 This May 28 photograph by Julio Cortez helped the Associated Press win the Pulitzer for breaking news photography. Credit:AP/Julio Cortez

“It means the world to me to share this with my colleagues,” Minchillo said on Twitter. “I hoped for one Pulitzer in a lifetime of hustling and this is how I wanted it. With my people, on the big story.”

Full list of Pulitzer Prize winners can be found here.