Teenager, 18, is gang-raped by seven people for five hours after she was abducted and her brother thrown down a well as they walked home in India

An 18-year-old woman was allegedly gang-raped by seven attackers as she walked home with her bother in a village in India.

The gang of seven, which reportedly included three minors, threw the victim’s brother down a well before launching the sex attack.

She was travelling on the back of her 21-year-old brother’s motorbike when the group intercepted them, police said.

The victim was assaulted from 8.30pm on Wednesday until 2am yesterday morning in the village of Padhar in Betul, Madhya Pradesh, according to NDTV. 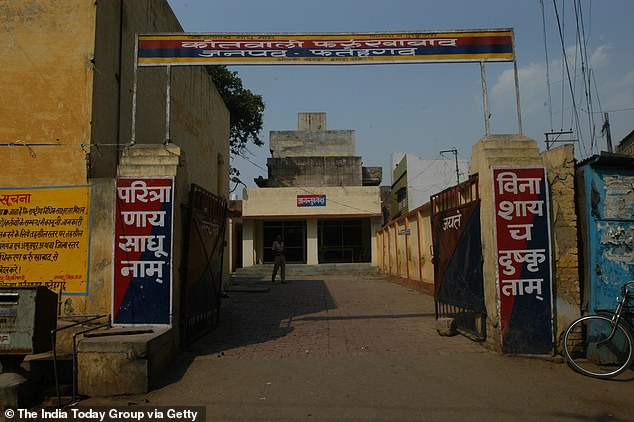 An 18-year-old woman was allegedly gang-raped in village of Padhar, Madhya Pradesh, by a group of seven. Pictured Kotwali Police Station where the suspects were taken

The young woman and her brother were returning to their home after refuelling the motorbike at a petrol pump.

The seven suspects on three motorcycles accosted them while they were checking a faulty headlight, police said.

Both were then forced to a nearby forest and beaten before the gang rape took place.

Five of the alleged attackers have been arrested, while two of the adult suspects are still at large, police said.

According to reports, the man managed to get out of the well and call for help. His sister was found unconscious by family members searching the area.

Officers managed to track one of the suspects after an ID card was discovered at the scene, reports state.

Police said the suspects have been charged with rape, kidnap and attempted murder.

The victim is said to be undergoing treatment in hospital and is in a stable condition.

Related posts:
May 1, 2020 World News Comments Off on Teenager gang-raped by seven people after she was abducted in India
Celebrity News:
Are Princess Beatrices recent events a way to distance herself from her father?
Hoda Kotbs absence from Today explained by Savannah Guthrie as well-known subs step in
The Chicks Postpone Shows As Natalie Maines Placed On Vocal Rest
Kim Kardashian Mocked Over Uncomfortable Office Chairs
Gloria Hunniford rushed to hospital after terrifying fall breaks her eye socket
Recent Posts