The WA government appointed two pro-Beijing community leaders to a new paid advisory council before Premier Mark McGowan escalated his criticism of the Morrison government’s handling of the China relationship.

The Labor Premier has become the most outspoken state critic of Australia’s China policy, drawing praise from Beijing and some Australian business leaders who fear their long-term exports are at risk from the collapse in diplomatic relations between the trading partners.

McGowan’s position has been bolstered through key WA community groups backed by influential Chinese businessmen and the Chinese consulate. China’s Ministry of Foreign Affairs last week seized upon the foreign policy split between Canberra and Perth. 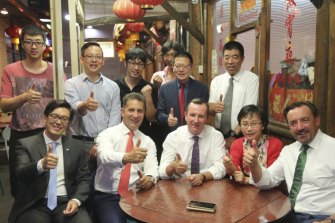 Last Tuesday McGowan sharpened his criticism of the federal government’s relationship with Beijing, saying Australia was acting “against its own interests” and the economic consequences of losing the trading relationship would be “absolutely catastrophic”. China’s Foreign Ministry hailed the comments, stating the Australian government should “heed these constructive opinions”.

McGowan has been warning the federal government over provoking China as far back as May last year, even offering himself to help rebuild the relationship in December.

In February, his government appointed Dr Edward Zhang and Dr Ting Chen, as the only two Chinese community representatives, to his 15-member multicultural council, a policy advisory body where members can earn up to $385 per day.

Zhang, who didn’t reply to a request for comment, has condemned the federal government’s position on the disputed South China Sea. “We overseas Chinese are the first line of defence for our motherland,” he said in 2016.

He has also said he would censor any content frowned upon by Beijing in his Chinese-language newspaper, the Australian Chinese Times, including criticism of the government, separatist language and references to the Falun Gong and the Taiwanese independence movement.

Zhang is a founding member and honorary chairman of the WA branch of the Australian Council for the Promotion of the Peaceful Reunification of China, a group tied to United Front. The United Front operates overseas networks that mobilise support for the Chinese Communist Party.

Its Sydney president, billionaire political donor Huang Xiangmo, was banned from re-entering Australia in 2019 on advice from intelligence officers.

Chen, the second representative on the council, has been vice-president or president of WA’s largest and oldest Chinese association, Chung Wah, since2017.

The association’s shift to a pro-Beijing organisation was ushered in by former president Richard Tan after years of internal hostilities sidelined second-generation Australian-Chinese members.

Tan said he built the organisation’s intimate relationship with the Chinese consulate and aided a leadership takeover by a bloc of mainlanders in murky circumstances in 2015 when Chen was secretary.

Tan said there was no official affiliation with United Front but many individuals had ties with groups in the network, including himself. Chen founded WA’s Fujian association – a United Front linked operation – with his colleague Ding Shaoping. Chen then succeeded Ding as the president of Chung Wah.

“The links with the United Front is something so obvious, or it has been so obvious in the past,” said Tan. “It’s just that Australian politicians knowingly ignored it, or pretend they don’t know.”

In 2016 Chung Wah signed a statement defending China’s actions in the South China Sea where it has made territorial claims disputed at the United Nations. “The Chinese nation has been a nation that values ​​peace since ancient times, but if anyone plots wrongdoing, we will fully support the motherland in a just struggle”.

“China wants to expand influence. That something so obvious that it is benign,” Tan said. “It’s not like China is going to take over Australia or anything.”

A former senior figure within the Liberal party who has worked with the association has questioned whether its leadership is too close to the Chinese consulate and the Consul-General.

“With the tensions between China and Australia, I am concerned if things get worse these [may not be] good representatives of the Chinese community in Australia,” said the Liberal figure, who asked to remain anonymous so he could speak freely.

He said the association struggled to resist the pressures from the consulate, which often underwrote their functions, pressured them to host events and linked them to United Front groups.

The consulate and Chung Wah co-hosted the Chinese New Year Ball last year with Liberal and Labor MPs and a gala event in 2019 commemorating the 190th anniversary of Chinese migrants’ arrival in Western Australia.

Chen denied any link between the consulate and Chung Wah. “They don’t have any influence at all,” he said.

He said the government committee work was focused on promoting multicultural harmony, not international affairs. 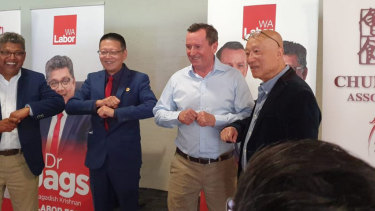 A spokeswoman for the McGowan government said it supported Chung Wah because it represented all sections of the state’s Chinese communities, which includes migrants from Mainland China, Hong Kong, Taiwan, Malaysia and Singapore.

Chen said the only feedback he had received on Hong Kong from members of the community was that they “supported the Hong Kong government instead of the pro-democracy movement” and that “some Hong Kong people were scammers who have put Chinese in Australia in a very difficult position”.

Asked about Xinjiang, where up to 1 million Muslim-minority Uighurs have been detained by Chinese authorities, Chen said he had not seen any evidence of human rights abuses and that “no one had raised the issue with him”.

Get a note direct from our foreign correspondents on what’s making headlines around the world. Sign up for the weekly What in the World newsletter here.