If Doug Emhoff had a slogan for how he campaigns on behalf of Kamala Harris, it would probably be: I've got you.

When Harris ended her presidential run in December, her husband posted a black-and-white photo on Instagram in which he's smiling, sitting on a thin chair, with arms around Harris as she leans on him – while remaining ready to jump back on her feet.

"I've got you @kamalaharris," the caption reads. "As always." Then a heart emoji.

When a protester jumped up onstage and lunged at Harris in 2019, Emhoff hopped into action and helped usher the protester away, another gesture that screamed: I've got you. "There was something kind of superhero-ish about it," says Barbara Perry, director of presidential studies at the University of Virginia's Miller Centre.

In contrast to Joe and Jill Biden, who have been married for more than 40 years and have been through multiple presidential campaigns together, this is Harris and Emhoff's first.

They're early on in their marriage, too. America is getting acquainted with them as a couple while they're still learning about one another. And if the Biden-Harris ticket wins in November, the country – and Emhoff – will have to figure out what's to be expected of the historic first second gentleman.

"There's so much pressure on you to try to meet everyone's standards," says Chasten Buttigieg, who befriended Emhoff when his husband, Pete, was running against Harris for president. Buttigieg sent Emhoff a word of advice when his wife was picked for the veep slot: "Keep being himself, because I feel like everybody wants you to be something else."

Harris and Emhoff are both 55 and will celebrate their sixth wedding anniversary on Saturday. "They still seem to radiate newlywedism," observes Perry, adding that the couple appears "really besotted with each other". (The campaign declined to make Harris or Emhoff available for interviews.) 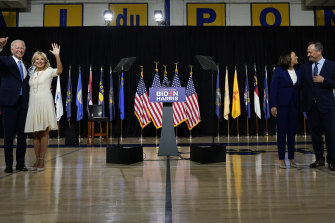 Perry sees a pairing that reflects the country's diversity. Emhoff is white and Jewish. Harris is black and Indian – she identifies as Baptist, like her father, but her mother also introduced her to Hindu customs. "They showcase America as it is, as it is becoming and as it will be," she says.

At their 2014 wedding, Emhoff wore a flower garland around his neck to honour Kamala's Indian heritage; they smashed a glass per Emhoff's Jewish tradition. It's Harris's first marriage and Emhoff's second – he has two children from his previous one. According to the Pew Research Centre, remarriage is on the rise in the US – as are unions of two people of differing faiths and races.

But before they were a couple, Emhoff was unsure Harris would even call him back, the senator recalls in her 2019 memoir, The Truths We Hold. In 2013, Harris' best friend, Chrisette Hudlin, met Emhoff at a business meeting they had along with her husband – Reginald Hudlin, director of Boomerang and producer of Django Unchained. Emhoff is an entertainment attorney who once represented the ad agency that created the Taco Bell Chihuahua.

Chrisette decided to set him up with Harris – she gave him her number and told her not to Google him: "Don't overthink it," Harris recalls Hudlin telling her. "Just meet him."

Emhoff texted Harris from a Lakers game one evening and then called her the next morning and left a long voice mail. "He thought his voicemail had been disastrous and that he'd likely never hear from me again," Harris writes. "He had to restrain himself from calling again and leaving another long-winded message trying to explain the first one." 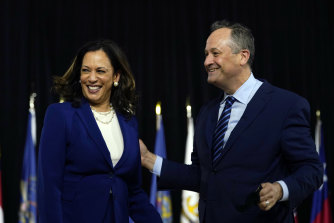 Harris and Emhoff are both 55 and will celebrate their sixth wedding anniversary on Saturday.Credit:AP

Harris was intrigued. When she called him back, they talked for an hour, a light and jovial conversation that had her "genuinely excited." The morning after their first date, Emhoff emailed her with his availability for another. "I'm too old to play games or hide the ball," the email read. "I really like you, and I want to see if we can make this work."

After their second date, Emhoff was ready for Harris to meet his children – Cole, who was then in high school, and Ella, a middle-schooler – but Harris wanted to wait.

"As a child of divorce, I knew how hard it can be when your parents start to date other people," she writes in her memoir. Two months in, that meeting happened at a casual seafood spot in Malibu, the Reel Inn. On the drive there, Harris bonded with the kids over a shared love of jazz-soul legend Roy Ayers, the four of them all singing along. After dinner, the kids took Harris to an art show at Cole's school. As Harris writes in an essay for Elle magazine, "I was already hooked on Doug, but I believe it was Cole and Ella who reeled me in."

As a single politician in her 40s – first as San Francisco's district attorney, then as the state's attorney general – Harris tried to keep her dating life separate from her career. "I knew that if I brought a man with me to an event, people would immediately start to speculate about our relationship," she writes. She and Emhoff dated for six months before she invited him to a work function, a speech she gave about truancy.

In March 2014, Emhoff had planned to propose while they were on holidays in Florence, but he popped the question while she was hurriedly packing and they were discussing what kind of take-out to order. When she realised Emhoff's "I want to spend my life with you" wasn't just a sweet comment but a prelude to a marriage proposal, Harris burst into tears. "These were not graceful Hollywood tears streaming down a glistening cheek," Harris writes. "No, I'm talking about snorting and grunting, with mascara smudging my face."

They were married in a small ceremony at the Santa Barbara courthouse in August 2014. The term "stepmother" never fit, so she and the kids decided she would be "Momala." Harris writes that she would join Kerstin Emhoff, Doug's ex-wife, in cheering on Ella at her swim meets and basketball games. "We sometimes joke that our modern family is almost a little too functional," Harris says

After her 2016 election to the Senate, Emhoff started splitting his time between Washington and Los Angeles. One of Harris' colleagues, Senator Maggie Hassan, recalled this week that, as Harris took office, "the sheer delight they had in each other's presence was really fun to see".

Hassan, a former governor of New Hampshire, has watched her own husband carve out his place in a role that is still not traditional for a man. "I think Doug is going to be great. I think he will, first of all, focus on supporting Kamala and making sure she has the support that comes with a strong marriage under her," Hassan said. "Two, I think he is so smart and so interested in building a more inclusive country and a more inclusive economy." She added that she knows Jill Biden will have "a lot of good advice to give him".

Emhoff seems to be "a bit of a chameleon in a good way", Perry says. "Whatever role he needs to play, he seems to glide easily into it." However, she notes that since there has never been a first or second gentleman, it's unclear what the expectations will be. Will they even be different? The most recent second ladies, Karen Pence and Jill Biden, have worked to support military families. They're also both educators who've continued teaching while serving as second ladies. "Will he feel comfortable if he is assigned that role, which [traditionally] is a very gendered role of not only second fiddle to the spouse, but second fiddle to the first lady?" Perry asks.

The New York Times reported on Monday that Emhoff has taken a leave of absence from DLA Piper, the law firm he joined as a partner in 2017. Perry wonders, "What will it be like for someone who's used to the California lifestyle and some elements of the Hollywood lifestyle, to go into somewhat of a straitjacket of being in public, being on the public stage all the time?"

During the primaries, Emhoff and Chasten Buttigieg bonded over their ignorance of the campaign trail. "We didn't necessarily think that's where we were going to be – but that's where we were," Buttigieg said. "There was a lot of shrugging and smirking when we're backstage, waiting or something, like: How did we get here?"

Emhoff's lack of political experience left the attorney no choice but to be his authentic self while in the limelight. "Maybe he didn't come with the perfectly planned, rehearsed speech," Buttigieg said of an event where they spoke in Las Vegas. "But he had this twinkle in his eye about how he loved his wife. That's why he was there. He wasn't there because he was the perfect orator."

If Biden and Harris are elected, Emhoff will probably take on specific issues – but Buttigieg adds that his main job will be as a shoulder to lean on, someone to say and to show: I've got you.

"You have to be there to take the weight of the day and make it go away," Buttigieg says, adding, "That's a really big service when you're the husband of the vice president of the United States. That's a job in and of itself."