Trails of bright lights struck Sydney’s skies over the weekend but, despite their UFO-like appearance, astronomers say something slightly closer to Earth was responsible: Elon Musk’s StarLink company.

Dozens of satellites from the SpaceX subsidiary were launched on Saturday (Sydney time) from Cape Canaveral Space Force Station in Florida, as they made their way south-east into a low-Earth orbit. 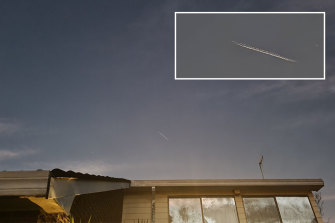 The satellites were the latest in a series of more than 2000 already-launched objects, which are part of StarLink’s bid to provide fast broadband access to people in “areas where connectivity has been unreliable or completely unavailable”, its website says.

The 53 satellites launched from the US caught the attention of Sydneysiders on Saturday night because of the relatively new way in which they were launched, said Dr Brad Tucker, an astrophysicist at the Australian National University.

Each dot is an individual satellite launched metres apart, before slowly spreading out by hundreds of metres, he said.

“They always look weird … because they fly in these lines, or constellation,” he said. “We’re talking about a fairly close formation in a very tight orbit, and this is because they want this global [broadband] coverage. They need to have the satellites flying in flight paths so the exact same points are covered every time.”

The sheer number of satellites flying overhead combined with the timing of StarLink’s launch meant Sydney had a brief a show in the sky, Tucker said. Satellites are mainly only visible from Earth when the sun reflects on them.

“You’re only going to see a satellite up to about two hours after sunset or before sunrise. And that is because the angle of the sun can still reflect off the satellites and then back down to Earth,” he said.

“These [satellites] always stand out because you see them in a row.”

While broadband satellites are not new, StarLink is considered to be the first major company to launch successive satellites on such a large scale.

The fast and reliable internet provided by these satellites is bringing connection to people in areas previously cut off: StarLink has provided reliable connections to Ukraine amid Russia’s invasion, and last week connected a remote Tongan community still cut off after January’s tsunami. 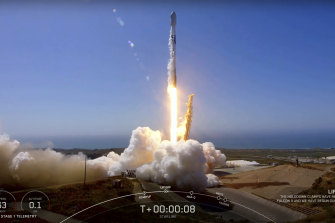 A SpaceX Falcon 9 mission to launch 53 Starlink satellites to low-Earth orbit takes off. Credit:SpaceX via AP

But low-Earth orbit “mega-constellation” satellites, not only StarLink’s spacecrafts, have been the focus of intense debate in the space community due to the interference they cause to other services. Weather satellites are particularly affected because of the similarity of their frequencies.

“You do have interference when you’re trying to monitor the stars from the ground,” said Tucker.

“At the rate we’re putting up satellites, and when you get these formations, all you’re going to start seeing is satellites flying overhead.

“The technology of these satellite constellations is transformative in a way we just never thought of, but with it comes some of these consequences that we never thought of. We’re now having to deal with these and so sightings like this are more and more commonplace.”