A pet rabbit in China has become an internet sensation after hundreds of thousands of web users tuned in to listen to the animal’s ‘soothing’ munching sound.

The four-year-old female angora rabbit, nicknamed ‘Big Bear’, is seen in trending footage dressed in different outfits while chomping on fruit and vegetables.

The small animal has become a little therapist for its nearly one million followers who enjoyed the chewing noise. 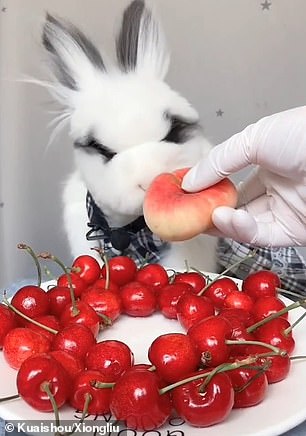 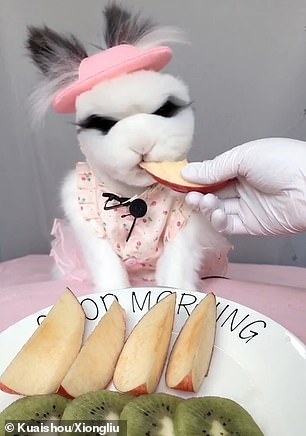 The four-year-old female angora rabbit from China’s Heilongjiang, nicknamed ‘Big Bear’, is seen in trending footage dressed in different outfits while chomping on fruit and vegetables

The Chinese rabbit owner, who lives in China’s north-eastern Heilongjiang province, said that she started posting videos in 2016 to document her pet’s daily life.

She told Chinese media: ‘One time I randomly posted a video of [the rabbit eating fruit] and I realised people really liked it. [They] really liked listening to its chewing sound.’

The owner has claimed that her pet rabbit is mainly fed with hay. It only has a small amount of fruit or vegetables as snacks when they are filming videos.

Over 800,000 Chinese web users have swarmed to watch and listen Big Bear munching on fruit and making the crunchy noise.

One commenter wrote: ‘The sound is so soothing and the little rabbit is so adorable. I’m in love with her!’

Another fan replied: ‘This sound is so awesome. I can’t stop listening to it.’

This type of content is also known as ASMR, a huge online phenomenon that is said to help calm people and even beat anxiety or insomnia.

ASMR, or autonomous sensory meridian response, is the feeling of a tingle-like sensation in the head, neck, spine and even legs that make people feel sleepy and relaxed, and can be triggered by certain noises and visuals, including whispering and stroking.

The triggers are bizarrely mundane, a fact that is borne out across the nearly 80 million videos dedicated to ASMR which are available on YouTube.

Others have produced the ‘soothing’ sounds by feeding their pets different kinds of snack, such as fruit, vegetables or raw meat.

WHAT IS ASMR AND WHAT ARE ITS POTENTIAL HEALTH BENEFITS?

A large online community claims ASMR clips on YouTube provoke a response likened to a warm tingling on the skin in some viewers.

It is most commonly triggered by whispering, but can be brought about by an array of stimuli, including gentle touches, observing mundane tasks, and hearing crinkling/tapping sounds.

The sensation typically begins at the scalp and moves down the back of the neck and upper spine, helping people to relax, relieve stress or sleep.

Researchers say the feeling can be a response to specific sights, sounds, touch, smell, and other stimuli.

ASMR may benefit people struggling with anxiety and depression, but there isn’t any proven direct evidence yet, according to Dr Craig Richard of ASMR University, an online community devoted to researching the topic.

‘A 2015 research paper reported the 500 participants in the study watched ASMR videos to relax and to deal with stress and that watching ASMR videos had a positive effect on their depression,’ he said.

‘Another strong area of support for the potential helpfulness of ASMR are the thousands of comments posted on online forums, Facebook groups, the ASMR subreddit and especially YouTube videos.

‘Although this type of anecdotal evidence is weak, the sheer volume of it has helped to bring attention and focus to the potential therapeutic value of ASMR.’