Dr. Anthony Fauci gave Donald Trump a slideshow Tuesday to demonstrate how quickly the federal government is working to produce a vaccine for the coronavirus – after a sharp exchange Monday in which the president said he wanted it in a ‘couple of months.’

‘I just want to connect what we’ve been talking about the past few weeks,’ Fauci, 79, told the president.

Fauci then had an aide pull up a slide that outlined how long it took officials to respond to the Coronavirus compared to other infectious diseases.

Coronavirus had the shortest time frame when it came to testing a potential vaccine. 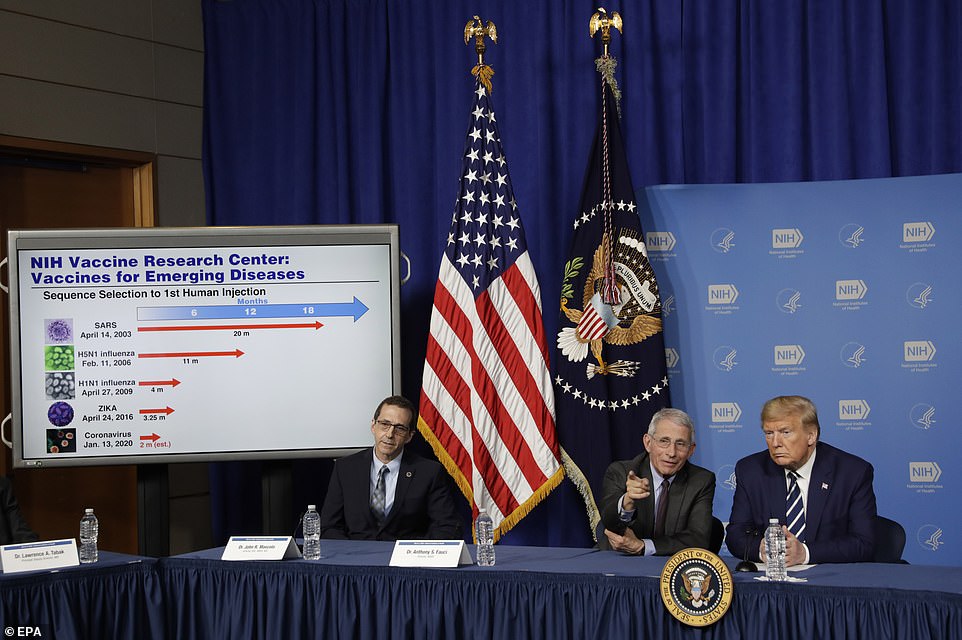 Dr. Anthony Fauci gave President Trump a slideshow to demonstrate how quickly the federal government is working to produce a vaccine for the coronavirus 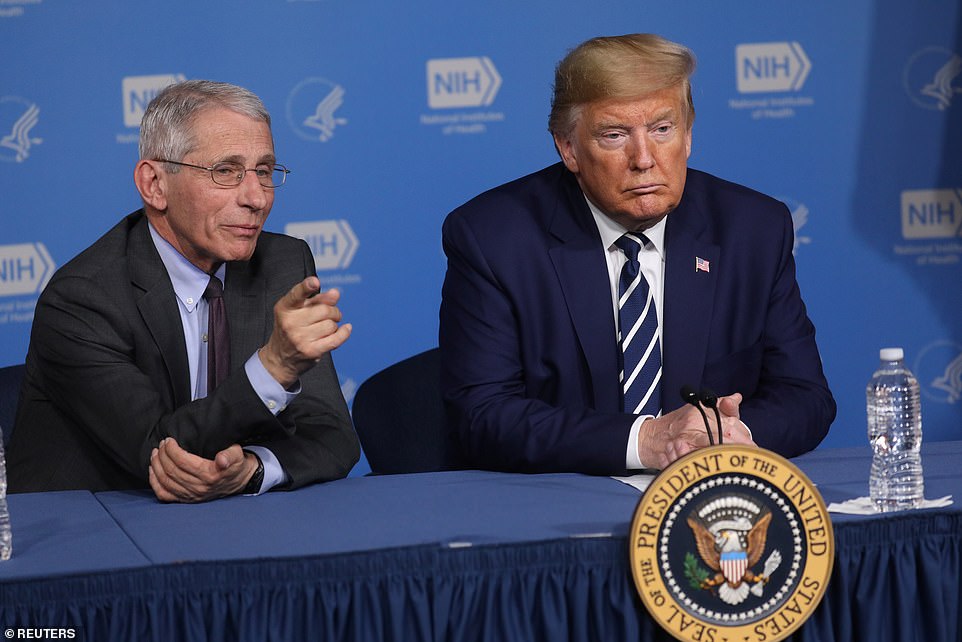 UPresident Donald Trump listens to Anthony Fauci, director of the NIH National Institute of Allergy and Infectious Diseases, during a briefing on the coronavirus 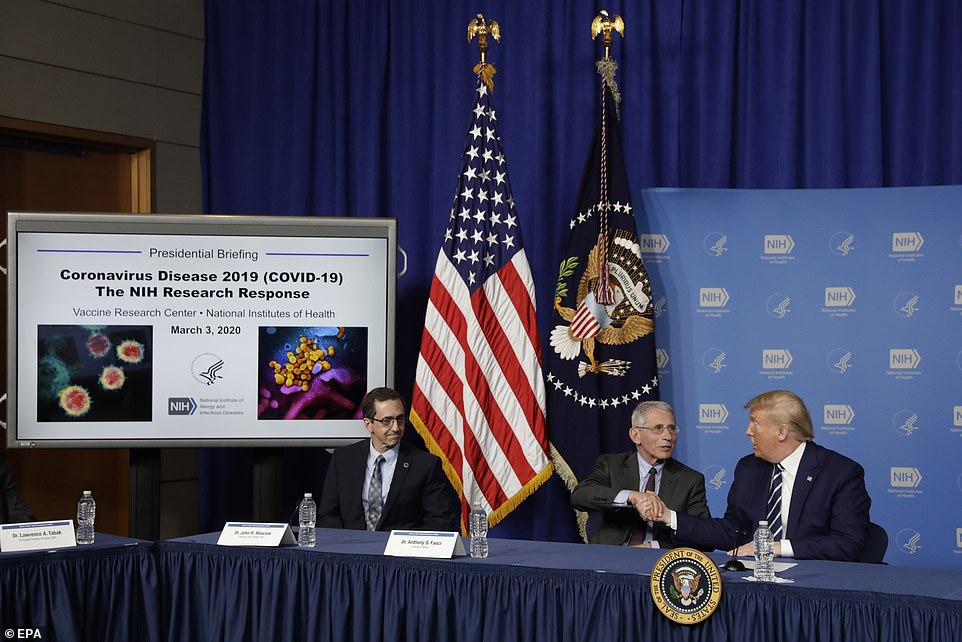 Dr. Fauci gave President Trump the slideshow to show how fast work is progressing on the coronavirus

Phase one is the first round of testing on humans as Fauci reminded Trump, who has pushed for a vaccine to be quickly developed.

‘Remember doesn’t mean that is not the vaccine,’ he reminded the president.

He pointed to the slide, which showed the timetable of the discovery of various infectious diseases to when the first human trials were conducting, demonstrating how quickly officials were moving on the coronavirus outbreak.

‘So that kind of thing is what this place is all about. It’s kind of like a SWAT team, of going out and responding to emerging microbes,’ Fauci told the president. 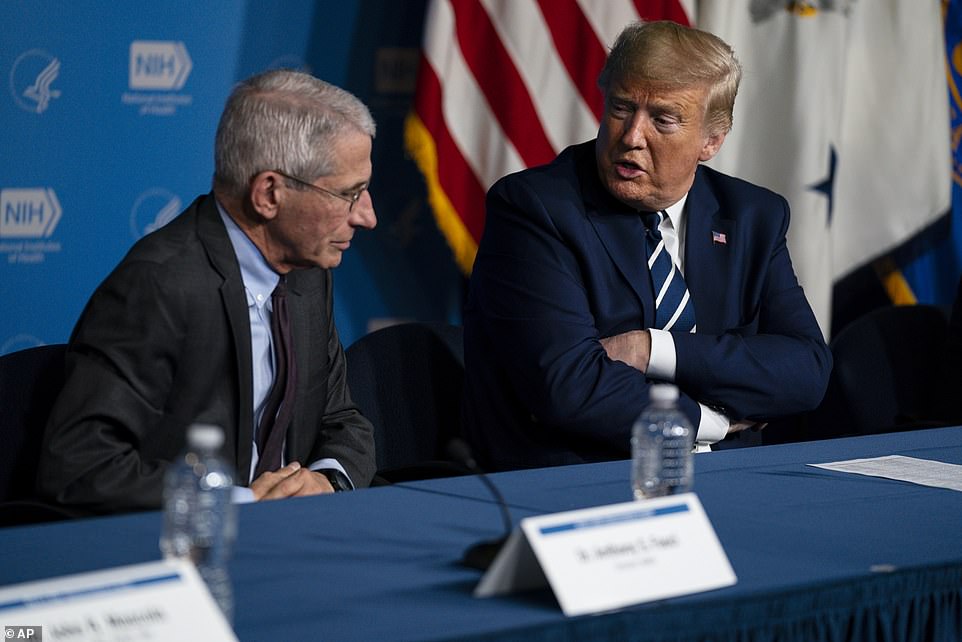 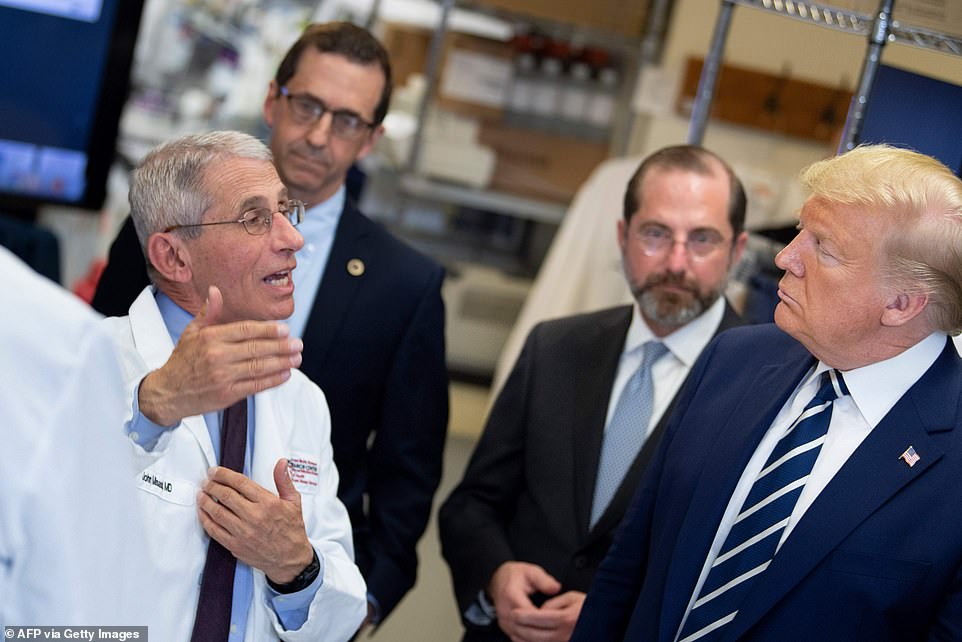 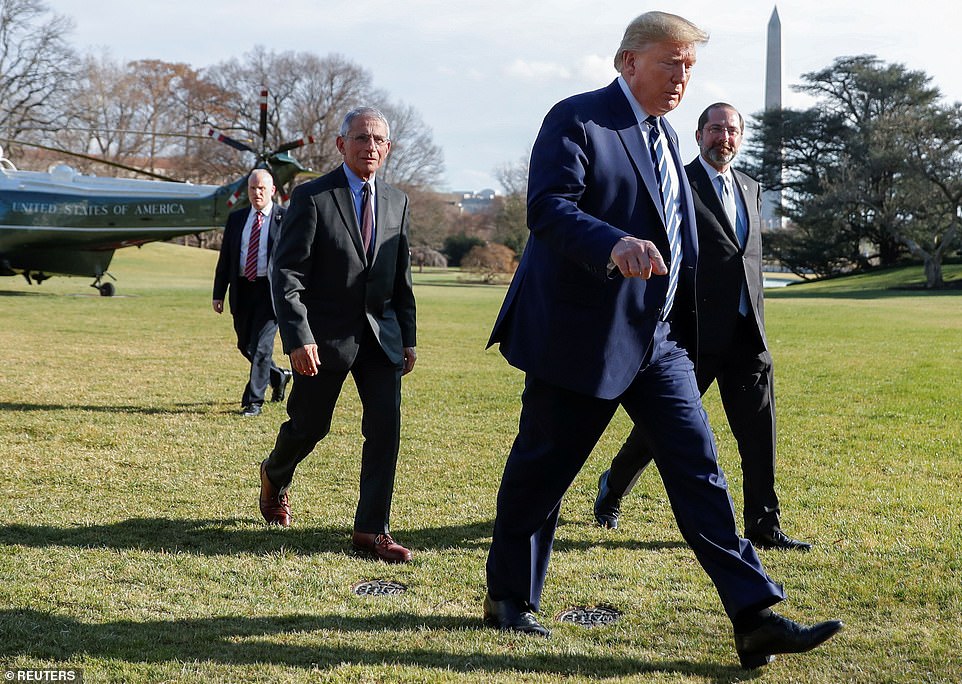 President Donald Trump is followed by Anthony Fauci, director of National Institute of Allergy and Infectious Diseases, and Health and Human Services (HHS) Secretary Alex Azar as they return to the White House from a coronavirus briefing

The briefing came as the ninth person died of the coronavirus in the United States. All the deaths have been in Washington state.

President Trump and Dr. Fauci had sparred on Monday during a meeting with pharmaceutical executives as Trump pushed the group to develop a vaccine to the coronavirus within ‘a couple of months.’

The executives, however, warned the president that a vaccine to deploy in a large scale public way would take a year to a year and a half even as they emphasized all are at various points in the testing stage, with some saying they could be at the human testing stage in a few months.

Trump latched on to that human testing number only to have Fauci put the brakes on his hopes for a quick solution.

‘Like I’ve been telling you, a year to a year and a half,’ Dr. Fauci said.

President Trump shrugged him off. ‘I like the sound of a couple of months better,’ he said.

‘I’ve heard, very quick numbers, a matter of months. Pretty much a year would be an outside number. So I think that’s not a bad,’ he added of the time table for a vaccine.

‘When is it going to be deployable,’ Fauci reminded him. ‘That is going to be at the earliest a year to a year and a half, no matter how fast you go.’

Fauci has stayed consistent in that message with the president.

He and Health and Human Services Secretary Alex Azar returned to the White House with President Trump after the NIH briefing Tuesday. The three men spoke to the press on the South Lawn after they exited Marine One.

‘They reported some really important news to the president,’ Azar announced. ‘That yesterday the Food and Drug Administration authorized the entry of that vaccine into phase 1 safety clinical trials.’

Fauci stepped in to give that announcement some context.

‘Very soon, we’ll be sticking the first person with the vaccine but I want to caution everybody that’s only the first stage of the development of the vaccine,’ he said.

‘Safety is very important and you really need to know that it actually works,’ he noted, adding ‘the whole process is going to take a 1, 1 1/2 years at least.’

Fauci has balanced his role of informing the public with appeasing the president’s desire for a rapid result.

“You should never destroy your own credibility. And you don’t want to go to war with a president,” Fauci told Politico in an interview Friday. “But you got to walk the fine balance of making sure you continue to tell the truth.”

An increase in testing for the coronavirus began shedding light on how the illness has spread in the U.S. with newly confirmed cases in New York, Georgia, Florida and New Hampshire pushing the tally to more than 100 across 15 states.

Fauci has said he expects community-related cases to grow in the coming weeks.

‘My concern is as the next week or two or three go by, we’re going to see a lot more community-related cases,’ he said. ‘That’s of great concern.’

Roughly a quarter of the 113 cases in the US have likely been transmitted through local communities and are not travel-related, according to health officials. 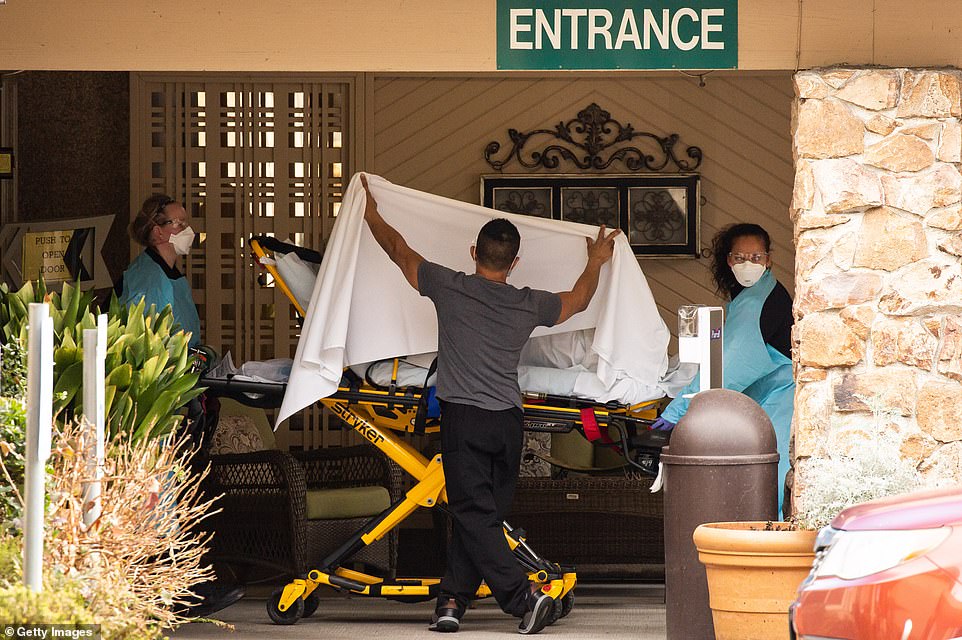 The coronavirus death toll in the US rose to six on Monday and there are now more than 100 confirmed cases across multiple states. Five of the six deaths – all of which occurred in Washington state – have been linked to a Seattle senior living facility (pictured above) 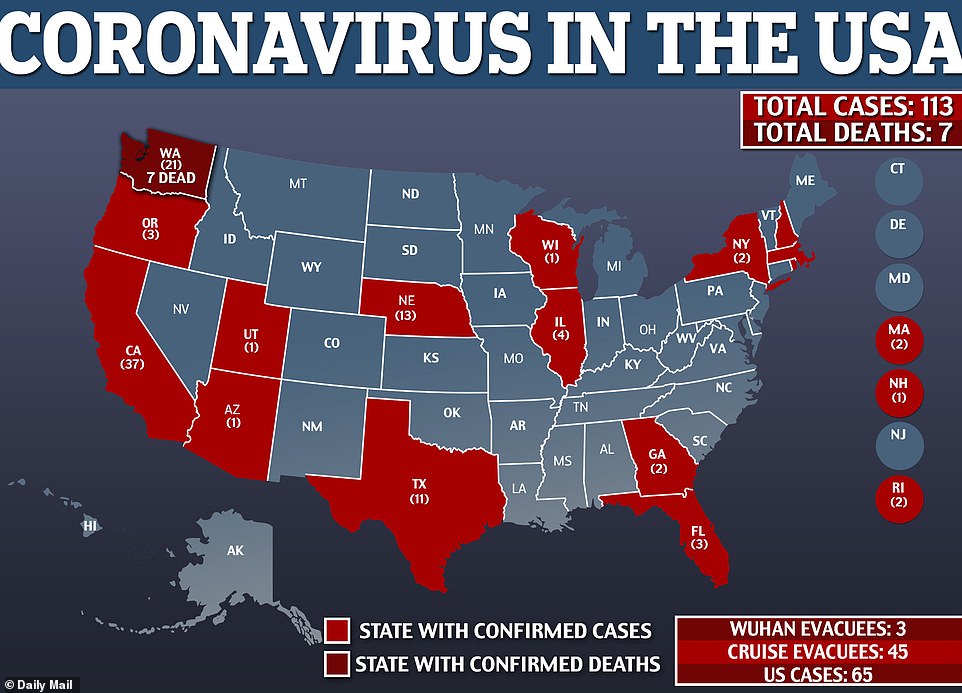 Despite this, the latest cases detected in both Georgia and New Hampshire on Monday – both firsts for each state – have been linked to travel in Italy. The two cases in Georgia involve people from the same Atlanta household, including a man who recently returned from Italy. The New Hampshire case involved a hospital worker who also recently returned from a trip to Italy.

New York announced on Tuesday its second confirmed case in a man in Westchester County. Florida also revealed it had detected its third case after a woman whose sister had previously been diagnosed was found to have contracted the disease.

The total number of cases in the US includes people who tested positive after returning from travel to outbreak areas in other parts of the world, their close contacts and infections that appear to be from community spread – people who did not travel or have known contact with other infected people.

Dr Fauci said community spread made it almost impossible to predict how many cases there will be.

‘The very fact that you have community spread… the source of these infections are not entirely known. People are cropping up with infections and you can’t trace where they got it,’ Dr Fauci said.

State and local authorities have been stepping up testing for the illness following a debacle with faulty kits from the Centers for Disease Control and Prevention that officials say delayed results.

In response to the faulty tests, the Food and Drug Administration over the weekend allowed state and local labs to develop their own tests for coronavirus.

It will see an increase in tests being carried out, according to FDA Commissioner Dr Stephen Hahn, who said he expects more than 1 million people to be tested within the next week.

The CDC recently broadened its guidelines for who should be tested for the new virus to include people with symptoms but without a travel history to virus hot zones.

More testing will bring more confirmed cases, experts said, but they cautioned that does not mean the virus is gaining speed. Instead, the testing is likely to reveal a picture of the virus’ spread that was previously invisible.

It comes after Dr Fauci told NBC News that the disease had likely reached ‘pandemic proportions’.

‘We’re dealing with an evolving situation. We’re dealing with clearly an emerging infectious disease that has now reached outbreak proportions and likely pandemic proportions,’ Dr Fauci said. ‘If you look at, you know, by multiple definitions of what a pandemic is, the fact is this is multiple sustained transmissions of a highly infectious agent in multiple regions of the globe.

‘When you have a brand new virus, in which no one has had any experience before, that kind of gives the virus an open roadway to spread.

‘If you look at the people who have just come to the attention of the health authorities, that’s 2 to 2.5 percent… But even if it goes down to 1 percent, that’s still very, very serious.’