An ‘apocalyptic’ tornado tore through a Sicilian island on Friday night, killing two people and leaving nine others seriously injured.

The whirlwind ‘hit and overturned six cars’, with shocking photographs showing one vehicle thrown against a house and another lying battered in a field, the civil protection agency said in a post on Facebook.

Two people were killed in the tornado, and were later identified as an off-duty fireman who was stationed on the island, and an 86-year-old male resident, according to Italian news agency ANSA. 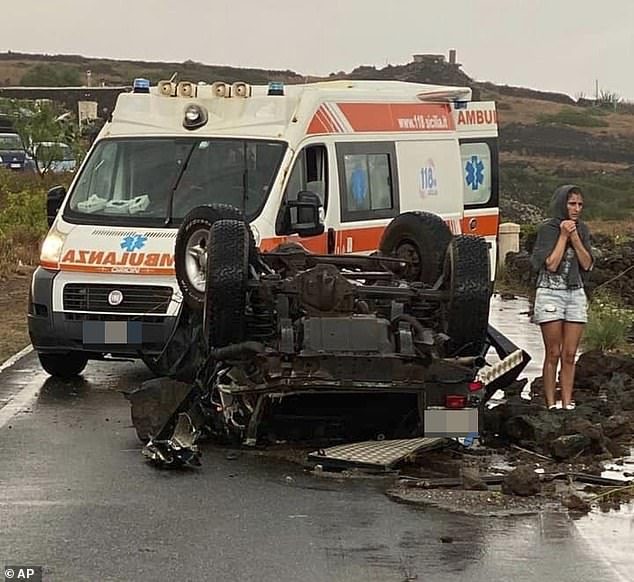 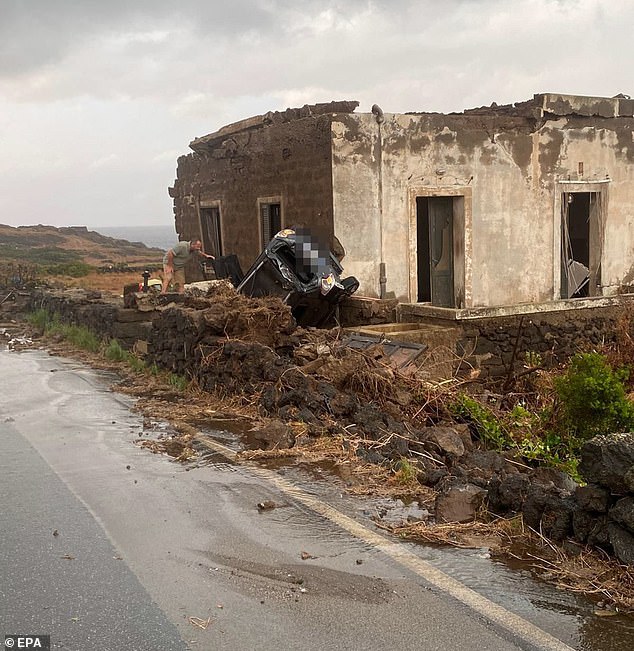 Shocking photographs showed one vehicle thrown against a house and another left lying battered in a field, the civil protection agency said in a post on Facebook 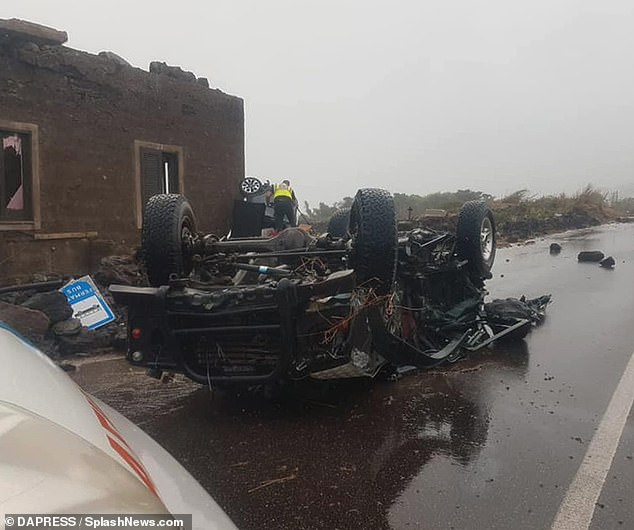 The whirlwind tornado ‘hit and overturned six cars’ (pictured), and two people were left dead while nine others were injured, according to firefighters

The victims were in separate cars which were among some ten vehicles that were flipped into the air by the force of the ‘apocalyptic’ tornado, ANSA said.

The devastating scenes reportedly saw the deceased thrown free of their vehicles, with one victim landing on a low wall, and the other on the ground.

At least one car landed on its roof while another ended up on its smashed front end.

The mayor said no one appeared to be missing on the island after the tornado ripped through the island, adding: ‘We are still trying to figure out what happened.’

Residents described the scenes of destruction left behind as ‘apocalyptic’, while the strong winds were said to have ripped down a coastal road in mere seconds.

Mario Valenza, who lives in the Campobello district of Pantelleria, said his house was completely ‘gutted’ and his roof and doors were ripped off during the tornado.

Mario, who will be staying at his daughter’s house until he can inspect the damage at his home, said: ‘I was not at home at that moment – he says – inside there was only Assian, my Maremma sheepdog. 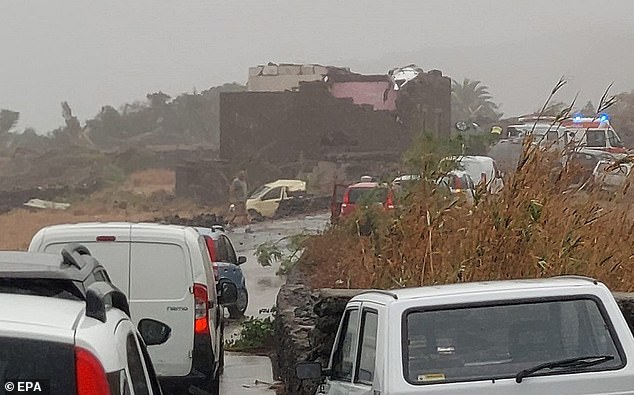 Two people were killed, and were later identified as an off-duty fireman who was stationed on the island, and an 86-year-old resident, according to ANSA. Pictured: Damage from tornado 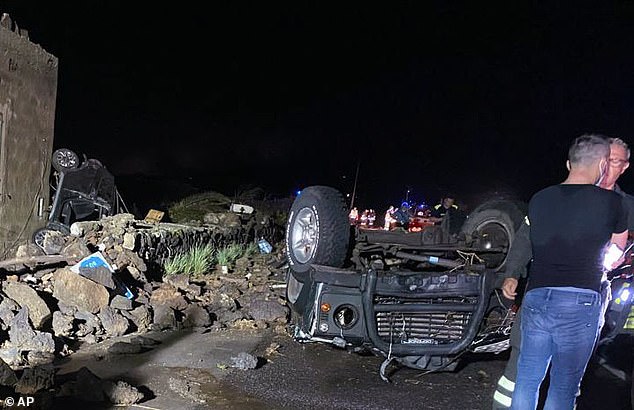 The victims were in separate cars which were among some ten vehicles flipped into the air by the force of the ‘apocalyptic’ tornado, ANSA said. Pictured: Two wrecked cars in tornado 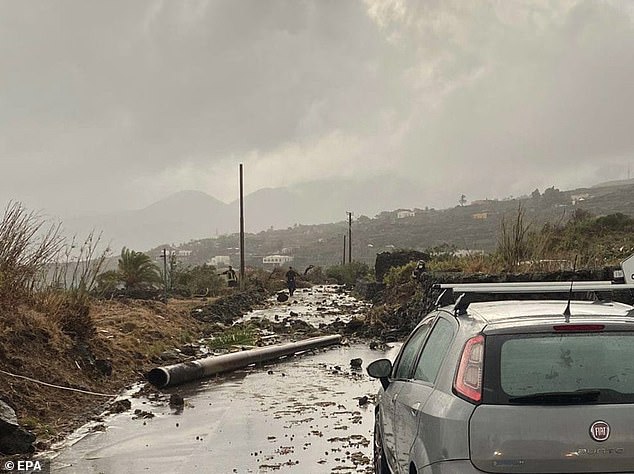 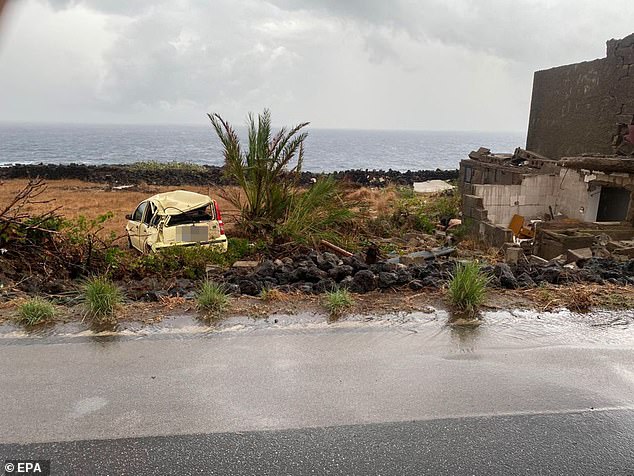 A hospital helicopter from nearby Lampedusa island was ready to provide assistance once the weather improved. Pictured: Crushed car and damage caused by the tornado

‘He was saved because, out of fear, he hid under the bed, thus escaping the fury of the wind and water. The vortex entered the window destroying everything inside.’

Pino Guida, resident in the Karuscia district of Pantelleria whose house is just 1km from where the whirlwind destroyed homes and cars, told La Sicilia: ‘I felt very strong rain and wind, something really anomalous for our island.

‘It all happened in a moment.’

Guida said they were unable to leave their house due to the intensity of the rain and ‘strength’ of the wind.

Guida continued: ‘At a certain point the light also went out and at that point we thought that the whirlwind had caused serious damage, even if we could not imagine there were also victims.’

The strong winds also ripped down a coastal road on the Mediterranean island in seconds’, local media reported.

‘It was an apocalyptic sight,’ an unnamed paramedic at the scene told ANSA.

A hospital helicopter from nearby Lampedusa island was unable to reach the island due to the bad weather but was set to provide help once the weather improved.

In a tweet, firefighters said: ‘Utility poles bent over, roofs damaged and trees knocked down.’

Pantelleria, famed for its volcanic cliffs and hot spring waters, is popular with tourists and regularly attracts A-lister celebrities including Sting and Giorgio Armani, who owns a luxury villa there.