Trainee GP, 28, will keep her job despite being nearly four times the limit when she fell over in drunken stupor as she got out of her car

A trainee GP who was four times over the limit after she fell over in a drunken stupor as she got out of her car will keep her job after blaming her drinking on stress.

Dr Bethany Hutchinson, 28, was reported to police after witnesses spotted her tumbling into a grass verge as she stumbled from vehicle after it mounted a kerb.

Officers attended the scene in Amesbury, Wiltshire, and found a half-full bottle of vodka and a bottle of wine in the doctor’s car.

A breath test showed Hutchinson, who had been drinking heavily at work whilst on a placement as a supervised GP trainee at a surgery, had 121 micrograms of alcohol in 100 millilitres of breath. The legal limit is 35mg. 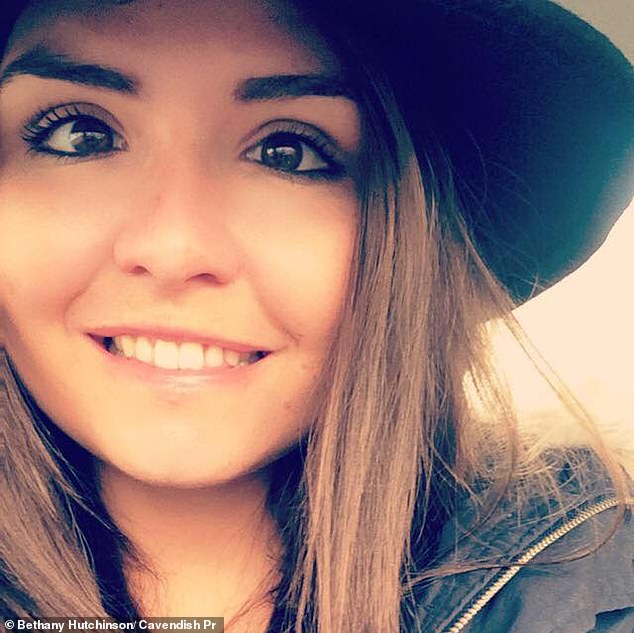 Dr Bethany Hutchinson, 28, was reported to police after witnesses spotted her tumbling into a grass verge as she stumbled from vehicle after it mounted a kerb

In December 2018 Hutchinson, who lives in the village of Idmiston, near Salisbury, admitted drink driving and was sentenced to eight weeks in prison, suspended for 12 months.

She was also banned from driving for 29 months and ordered to pay £115 costs. She was subsequently referred to the General Medical Council.

This week at the Medical Practitioners Tribunal Service, a disciplinary panel sitting behind closed doors concluded Hutchison’s fitness to practise medicine was impaired but allowed her to continue working under a series of restrictions.

She has already been treating patients under supervision since her conviction and the new conditions will last for a year before she faced a review in 2021.

In a statement to the hearing she said: ‘I understand that making amends for my past is not as simple as apologising for my actions but there is a need for a change of behaviour.’

The Manchester hearing was told Hutchinson, who graduated in medicine at Cardiff University in 2016, had completed foundation years 1 and 2 before being assigned to Barcroft Medical Centre in Salisbury. 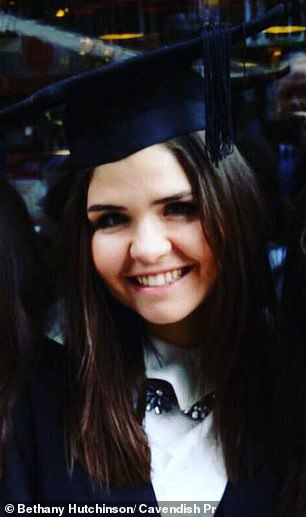 Officers attended the scene in Amesbury, Wiltshire, and found a half-full bottle of vodka and a bottle of wine in the doctor’s car

Redacted documents issued by the MPTS said the incident occurred in November 2018 when witnesses observed Dr Hutchinson ‘driving erratically’ and ‘mounting a kerb’ before exiting her car and falling into a verge.

Police breathalysed Dr Hutchinson and arrested her after she failed the roadside breath test.

Miss Kathryn Johnson lawyer for the General Medical Council told the hearing: ‘Dr Hutchinson had initially lied about drinking alcohol at work and was not open about the stresses she had been feeling. There is a risk of her not being open about such issues in the future.’

Hutchinson’s lawyer Tom Day appealed for the GP to be let off with a warning.

He said: ‘It is important to look forward. Dr Hutchinson has been frank, candid and honest about what she had done and members of the public may view her as a young woman who has shown great insight.

‘This was an isolated incident and that Dr Hutchinson has demonstrated a change in attitude. She has done everything she could to remediate and her risk of repetition is as low as feasibly possible.

‘Since the incident, Dr Hutchinson has had exposure to stress, but she now has better ways of coping with it. She is now a different person and a safe doctor.’

Hutchinson will have to notify the GMC of all her working arrangements including training programmes and regularly report to senior colleagues as part of her supervision.

Tribunal chairman Mr Julian Weinberg said: ‘Dr Hutchinson had been drinking alcohol at work, was between three and four times over the drink drive limit and her offence was considered sufficiently serious to cross the custody threshold.

‘But Dr Hutchinson has a high level of insight, and has taken positive steps towards remediation.’