A Chilean man was arrested after crashing his truck into one of Easter Island’s famous headstones, causing the mayor to call for vehicle restrictions.

The driver, who reportedly lives on the Polynesian island, sparked anger among islanders after driving into one of the sacred moai statues.

He was arrested after the incident on Sunday, and charged with damaging a national monument, Chilean newspaper El Mercurio de Valparaiso reported.

Moai, which now number around 1,000, were regarded by Easter Island inhabitants as symbols of religious and political authority, scholars believe. 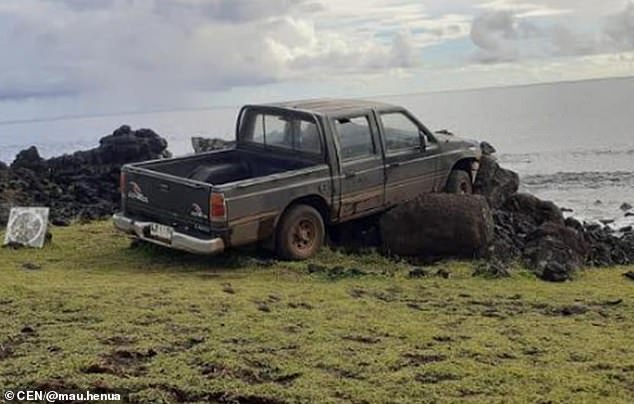 The driver, who reportedly lives on the Polynesian island, sparking anger among islanders after driving into one of the sacred moai statues

The destruction of one, though, has spurred Mayor Pedro Edmund Paoa into action, advocating stricter traffic controls on Easter Island.

El Mercurio reported that the mayor had previously called for better controls as the island faces rising population levels and rates of tourism.

He said: ‘They didn’t listen to us and this is the result. 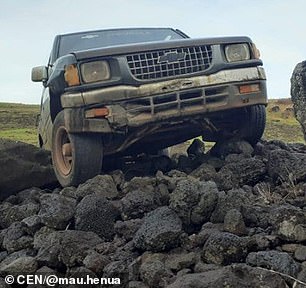 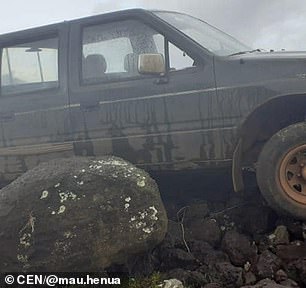 He was arrested after the incident on Sunday, and charged with damaging a national monument, Chilean newspaper El Mercurio de Valparaiso reported 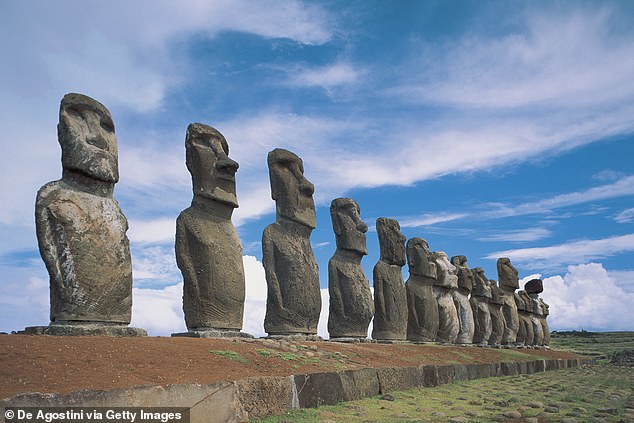 Moai, which now number less than 1,000, were regarded by Easter Island inhabitants as symbols of religious and political authority, scholars believe 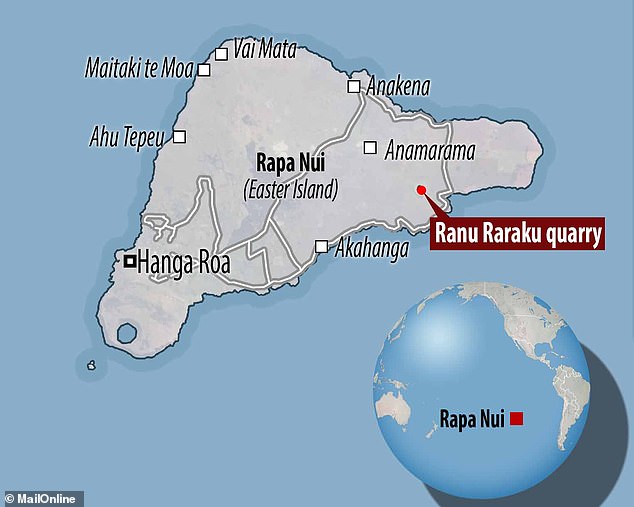 Rapa Nui (known as Easter Island) is believed to have been settled in the 13th century by Polynesian seafarers. Most of its famed sculptures were from Ranu Raraku quarry

‘Everyone decided against establishing traffic rules when it came to vehicles on sacred sites – but we, as a council, were talking about the dangers and knew very well what the rise in tourist and resident numbers could mean.’

Camilo Rapu, the president of the Ma’u Henua community which looks after the moai, told The Guardian that he suspects the crash was deliberate.

He called the ‘dreadful’ crash ‘an offence against a living culture that has spent the last few years fighting to regain its historic and archaeological heritage’. 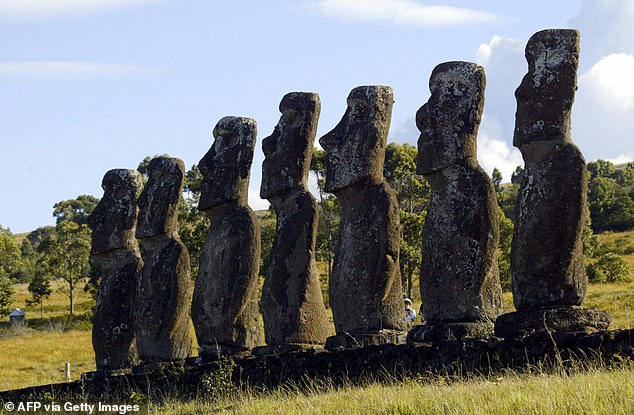 Camilo Rapu, the president of the Ma’u Henua community which looks after the moai (pictured on the hillside of the Rano Raraku volcano), suspects the crash was deliberate

What are the statues?

The Moai are monolithic human figures carved by the Rapa Nui people on Easter Island, between 1250 and 1500. All the figures have overly-large heads and are thought to be living faces of deified ancestors.

The 887 statues gaze inland across the island with an average height of 13ft.

Nobody really knows how the colossal stone statues that guard Easter Island were moved into position, nor why during the decades following the island’s discovery by Dutch explorers in 1722, each statue was systematically toppled – or how the population of Rapa Nui islanders was decimated.

Shrouded in mystery, this tiny triangular landmass, stranded in the middle of the South Pacific and 1,289 miles from its nearest neighbour, has been the subject of endless books, articles and scientific theories.

What do they mean?

In 1979, archaeologists said the statues were designed to hold coral eyes.

The figures are believed to be symbol of authority and power. They may have embodied former chiefs and were repositories of spirits or ‘mana’.

They are positioned so that ancient ancestors watch over the villages, while seven look out to sea to help travelers find land. But it is a mystery as to how the vast carved stones were transported into position.

In their remote location off the coast of Chile, the ancient inhabitants of Easter Island were believed to have been wiped out by bloody warfare, as they fought over the island’s dwindling resources. All they left behind were the iconic giant stone heads and an island littered with sharp triangles of volcanic glass, which some archaeologists have long believed were used as weapons.