BREAKING NEWS: Donald Trump puts himself at the heart of the ‘lockdown rebellion’ tweeting ‘LIBERATE’ Michigan, Virginia and Minnesota in broadside at Democratic governors day after saying they ‘call the shots’

President Trump made himself the star of the ‘lockdown rebellion’ by tweeting ‘LIBERATE Minnesota’ and then adding Michigan and Virginia to the list of states that should be freed.

The tweets came one day after the president’s coronavirus taskforce rolled out guidelines that would give governors broad power to decide when states’ economies would open back up amid the coronavirus pandemic.

But governors, including Michigan’s Gretchen Whitmer, have attracted protests from constituents complaining that the stay at home orders to prevent the spread of the deadly virus have trampled on their liberty. 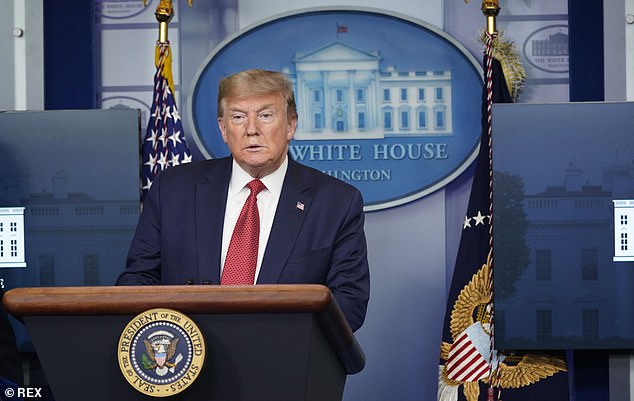 The president began by tweeting ‘LIBERATE MINNESOTA!’ as protesters gathered at the home of the Democratic governor Friday morning

Then the president said that Michigan and Virginia, two more states under Democratic control, should also be liberated, adding in Virginia that the 2nd Amendment needed to be ‘saved’ 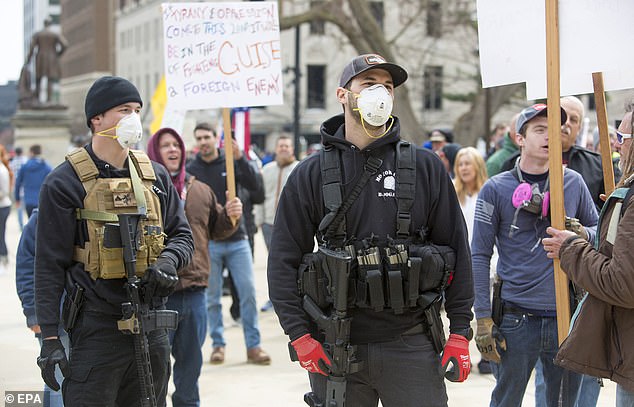 Backlash protests against lockdown orders have been staged all over the country. In Michigan on Wednesday, protesters came out to the state capitol as part of ‘Operation Gridlock’ 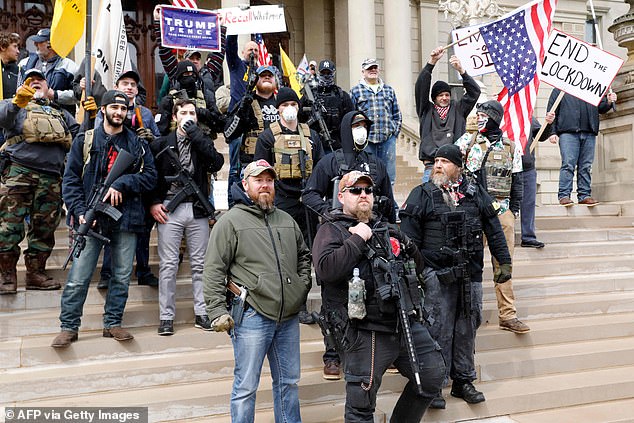 All three states that Trump singled out have Democratic governors – and are potentially swing states in the 2020 election.

On Wednesday, thousands of protesters showed up to Michigan’s state capitol in their vehicles to demonstrate against the order.

The protest – called ‘Operation Gridlock – was devised by the Michigan Conservative Coalition and the Michigan Freedom Fund, which is linked to the family of Trump’s Education Secretary Betsy DeVos.

It featured some of the elements of a Trump campaign rally including ‘lock her up’ chants and large Trump 2020 flags. Some protesters also brought Confederate flags, despite Michigan being part of the Union during the Civil War.

And on Friday, protesters showed up outside the residence of Minnesota’s Democratic Gov. Tim Walz, saying they, too, wanted to get back to work – despite widespread COVID-19 testing not being available yet.

Medical professionals have advised Americans to stay at home so the country can ‘flatten the curve’ – basically slow the spread of the disease so that medical facilities don’t get overhwhelmed.

Friday’s tweets come as a surprise because on Thursday when Trump was asked what his message to the demonstrators was, he declined to jump in the fray.

‘It’s been a tough process for people,’ Trump said.

A reporter then asked if the president would urge those protesters to listen to their local authorities.

But Democratic governors, including Virginia’s Ralph Northam, have been extending business closures.

On Wednesday Northam announced that entertainment businesses in the commonwealth, including movie theaters and gyms, would remain closed through May 8.

Previously that policy was set to expire on April 23.

In his tweet directed at Virginia, Trump also advised residents to ‘save your great 2nd Amendment.’

‘It is under siege!’ Trump said.

A week ago, Northam signed a new gun control bill into law.

Conservative pundits and Republican governors have been the ones pushing for Americans to get back to work – fearing that the economic destruction caused by people staying at home is worse than the wrath of the virus, which has so far killed a confirmed 38,846 Americans.

States with Republican governors were the last to put stay at home orders in place and there are still some hold-outs, including South Dakota where GOP Gov. Kristi Noem said Americans were giving up their ‘liberties for a little bit of security.’

Infections in South Dakota have tripled in one week.

‘I believe that South Dakotans can make the best decisions to keep themselves and their loved-ones safe,’ Noem tweeted Thursday.

Noem said that the state’s biggest outbreak, in a Smithfield Foods pork processing plant, would have happened even if she would have put a lockdown order in place.

‘What they are neglecting to tell folks is that this processing plant is critical infrastructure. Regardless of a shelter-in-place order or not, it would have been up and running because it’s an important part of our nation’s food supply,’ Noem said.