As leaders from across the globe began a virtual summit discussing issues from the coronavirus pandemic to climate change, Donald Trump's thoughts were elsewhere – on the tussle over the US election.

The president kept his head down, staring at something on his desk out of sight during a nine-minute speech on Saturday by Saudi King Salman bin Abdulaziz, who welcomed countries taking part in a meeting of the Group of 20 nations hosted by his kingdom. The speech and footage of other leaders was shown live on the official G-20 website. 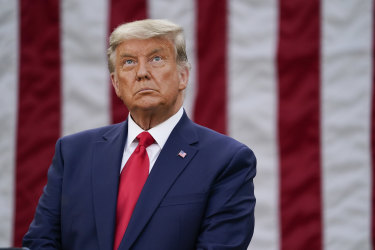 Donald Trump’s thoughts were elsewhere during the G-20 summit on Saturday.Credit:AP

Trump subsequently gave his own opening remarks to the summit, where he said the US under his watch had made the world safer, strengthening NATO, defeating Islamic State and fighting terrorism, according to a European official with knowledge of the proceedings. He claimed America had been efficient in fighting the pandemic while touting low unemployment and what he said was surging demand in the US economy.

Specifically on a COVID-19 vaccine, Trump repeated his long-held stance that "every American" who wanted one should have access, according to another official with knowledge of his remarks – implying such shots should be optional. Unlike other leaders in their comments to the meeting, Trump did not speak of the need to share vaccines around the world, especially with poorer nations.

After delivering his remarks to the summit, Trump left the White House shortly afterward for his Virginia golf club.