A 27-year-old man has become the fourth food delivery rider to die on Australian roads in the past three months, sparking an outpouring of grief from his fellow riders and calls for more protective equipment and better insurance from the sector's union.

Bijoy Paul, from Bangladesh, died in hospital after he was hit by a car in the southern Sydney suburb of Rockdale about 11am on Saturday while completing an order for UberEats. 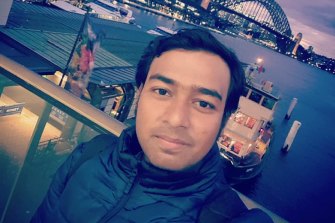 Bijoy Paul, a 27-year-old from Bangladesh, was killed in a road incident on southern Sydney on Saturday.

A friend, who did not want his name used, said Mr Paul had just collected food from the local McDonalds and was on his way to deliver it.

Mr Paul had posted on Facebook at his excitement of coming to Australia to study, where he was completing a masters of information technology, in early 2019. "Thanks to my Almighty for having an auspicious journey," Mr Paul said on his arrival.

Like many newcomers to Sydney, he posed for photos in front of landmarks such as the Harbour Bridge and Opera House.

On Saturday, NSW Police confirmed a cyclist was hit by a car at the corner of Princes Highway and Lister Avenue.

An off-duty paramedic treated Mr Paul before emergency services arrived and took him to St George Hospital, where he died later that afternoon.

Delivery riders paid their respects to Mr Paul on Facebook, remembering him as someone who was "good and nice to all". Dozens responded "rest in peace".

Michael Kaine, the national secretary of the Transport Workers Union, lashed gig economy companies like Uber in the wake of Mr Paul's death.

“Riders are being put onto bikes with no training or protective gear, they are working our streets day and night for little pay," Mr Kaine said. "They have no right to insurance and when they get injured or die, it’s at the discretion of their companies as to whether they and their families get supported."

Mr Kaine said the federal government should act to change the legal regime that allows gig economy companies to classify their workforce as independent contractors, who do not get the same benefits like a minimum wage, workers compensation and superannuation that employees receive.

Unlike some gig economy companies, Uber offers insurance to its workers and a spokesman said it had been in contact Chubb, the company it has partnered with about Mr Paul's case. Under the policy, riders can get $150 a day for 30 days if they cannot work because of an injury acquired while on a trip. It also includes lump sum payments if a rider dies.

"Our hearts go out to the family and friends of Bijoy Paul who died in hospital following a road accident on Saturday," the spokesman said. "Throughout the weekend our law enforcement team engaged with New South Wales Police to offer our full assistance and notified SafeWork NSW."

The union, which also notified SafeWork, said an investigator had been appointed.

The car driver, a 20-year-old woman, was taken to hospital for mandatory testing. Police investigations are continuing.

The other delivery riders who have died in recent months are Xiaojun Chen, Chow Khai Shien and Dede Fredy, who worked for several companies.

At the end of each day, we’ll send you the most important breaking news headlines, evening entertainment ideas and a long read to enjoy.  Sign up to The Sydney Morning Herald’s newsletter here, The Age’s here, Brisbane Times’ here, and WAtoday’s here.