In a lifeline for teenagers who fear they may lose out under the controversial new assessment system, universities minister Michelle Donelan wrote to vice-chancellors urging them to show flexibility.

She said youngsters should not have to ‘put their future on hold’ because of a sluggish appeals process and that, where possible, places should be kept open for teenagers trying to win a new grade. 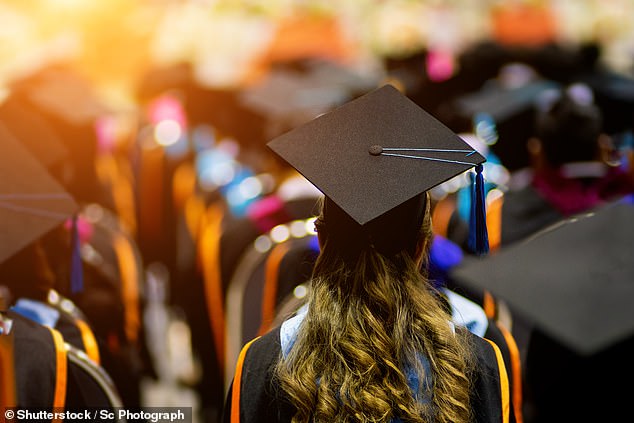 In a lifeline for teenagers who fear they may lose out under the controversial new assessment system, universities minister Michelle Donelan wrote to vice-chancellors urging them to show flexibility. Pictured: Stock photo of graduates lining up for their degree

And in another sign of turmoil in the A-level system, Nicola Sturgeon last night issued an extraordinary apology for her government’s approach to exams in Scotland. In a shock U-turn, the humiliated First Minister signalled thousands of pupils would get new grades after an outcry over the way that their papers had been assessed.

Details will be announced later today, but Miss Sturgeon promised teenagers in Scotland would now ‘get the grades they feel they have worked for and earned’.

Her announcement immediately ratcheted up the pressure on exams watchdog Ofqual to revise the nearly identical grading system south of the border.

Yesterday the Daily Mail revealed that thousands of A-level pupils in England and Wales could miss out on their first choice university because of the way the appeals system will work.

While they have been told that their appeals will need to be resolved by September 7, exams boards have suggested they may not have completed their review of grades until more than two weeks later. This means pupils could potentially miss out on a university place while waiting for the results of their appeal.

In her letter to vice-chancellors, Miss Donelan urged them to ‘extend some flexibility’ to those affected, writing: ‘Where you are aware that a student’s grade may change as the result of an appeal, I would encourage you, where possible, to hold their place until they receive the result of that appeal.’

She also suggested that pupils who successfully appealed would be exempted from any number caps on individual courses, allowing universities to fill the courses through clearing but still keep places open.

There are growing fears of chaos on Thursday when this year’s A-level results are revealed. Pupils did not sit exams this year because of the coronavirus crisis, being graded by their teachers instead.

However, the grades will be moderated centrally to ensure results overall are not inflated – leading to fears that thousands could see their results downgraded. This could trigger a flood of appeals and create turmoil in the university admissions system.

By Sarah Harris for the Daily Mail

Top universities are offering cash ‘bribes’ as high as £3,600 and preparing to slash entry grades in a desperate scramble to fill degree places.

They are luring students who enter the clearing system – where applicants achieve lower grades than they expected – with scholarships.

Others are giving away laptops or paying applicants £1,000 if they make the institution their firm choice. 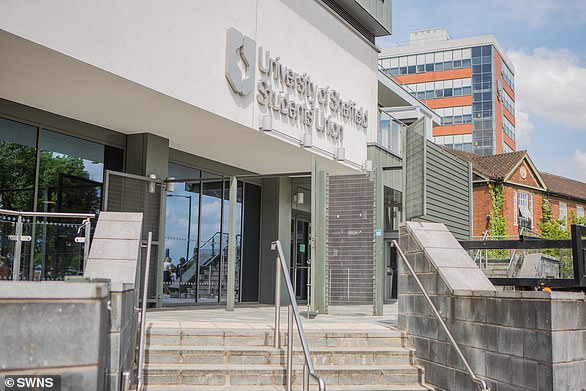 The University of Sheffield, a member of the prestigious Russell Group, will pay students £3,600 each if they accept an offer through clearing

The move comes as universities compete for students amid a drop in international applicants, which will affect income. Many home students could also defer their places until next year.

But education experts condemned the tactics and urged teenagers to put ‘incentives’ to one side when they receive their A-level results this Thursday.

The University of Sheffield, a member of the prestigious Russell Group, will pay students £3,600 each if they accept an offer through clearing.

Students applying for one of the 40 scholarships must have a household income of £50,000 or less.

But institutions vigorously defended their schemes yesterday. Sheffield University said students can apply for the scholarships earlier in the year, but that some are kept aside for clearing.

Professor Mary Vincent, interim deputy vice-president for education at the university, said ‘it’s important to us that cost is not a barrier to education’.

A spokesman for Derby University said its scheme rewards academic achievement, and a Northampton University spokesman said the laptop offer removes students’ ‘concern of having to buy their own device before joining’.

UCAS chief executive Clare Marchant predicted yesterday that 80,000 applicants could find a place via clearing this year – up from 73,325 last year.

While pupils need to meet university offers by September 7 – a deadline already extended once by UCAS – exam boards nervous of being swamped with grade challenges have refused to commit to the timeframe.

None of the ‘big three’ exams boards – AQA, OCR and Pearson Edexcel – have provided assurances to the Mail that they would be able to meet the date, because of concerns over the number of appeals likely following the ‘standardisation’ process that could downgrade 40 per cent of teacher-submitted grades.

Miss Donelan also said that institutions should also take a ‘holistic view’ of pupils who miss out on their offers, in an apparent acknowledgment that this year’s grades may be unreliable.

She added: ‘Nobody should have to put their future on hold because of this virus. That is why I am urging universities to be as flexible as possible in their admissions and to hold places for those whose grades are being appealed.’

Last night Westminster sources insisted there were no plans to mimic the Scottish government’s backtracking, and that the grade adjustment system being used in England was the ‘best option in a horrible situation’.

They added that unlike in Scotland, pupils in England could retake as many papers as they wished in October, and keep the highest result. They also pointed to examples of entire classes being awarded A*s as showing the need for standardisation. 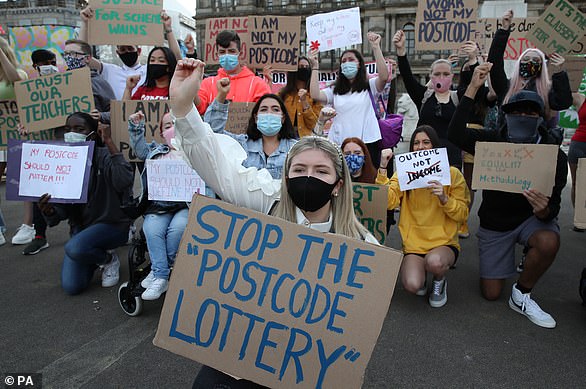 What could go wrong with results?

To stop this year’s results being seen as worthless, both England and Scotland tried to shift teachers’ estimated grades down, so they matched the trends of previous years.

In Scotland this resulted in the ‘attainment gap’ between the richest and poorest being replicated, so that the ‘most deprived’ pupils had their marks reduced by 15.2 per cent, but the richest had reductions of only 6.9 per cent.

This affected the most talented pupils in poorly-performing schools the worst, meaning those expecting top grades were dragged down because of their school’s record.

The outrage at the situation has led to a U-turn to be announced today.

How will appeals in England work?

Pupils will not be able to challenge the grades their teachers decided. Appeals must be made by schools – not pupils.

They are likely to be successful if a school’s past performance is unlikely to be a useful measure of predictions.

Most importantly, appeals will now be allowed if ‘unusually high or low ability pupils [have] been affected because they fall outside the pattern of results’.

Schools will need to submit evidence, and there are worries over how long the process could take.

What if appeals fail?

For pupils who are told there is not enough evidence to appeal, or have it rejected, they will have only the option of resitting in the autumn. They will be able to use the higher of the two grades. In cases where pupils suspect racism or bias behind teachers’ decision-making, their only option is raise a complaint, rather than use the appeals process.

What about pupils hoping to go to university this year?

The Education Secretary has said universities should ‘do all they can to ensure pupils can progress to higher education’.

Those pupils who miss out on an offer need to be ready to contact their university of choice and explain why they feel they should be admitted despite their marks, as they wait for appeals to be dealt with.

If pupils need to do resits, it may be possible to start their university courses in the new year, after sitting exams in the autumn and getting results before Christmas.