A woman who accidentally sent her local council ‘the finger’ emoji during a conversation on Twitter has said she was ‘horrified’ at her mistake.

But despite her blunder, the mistake managed to put smiles on the faces of many on the social media platform.

The online conversation between Brenda M Boyd and North Tyneside Council took place on April 3 when she asked whether their garden bin collections had resumed.

The social media representative replied to Brenda to tell her collections had resumed and she then responded with the emoji of a hand with the middle finger raised. 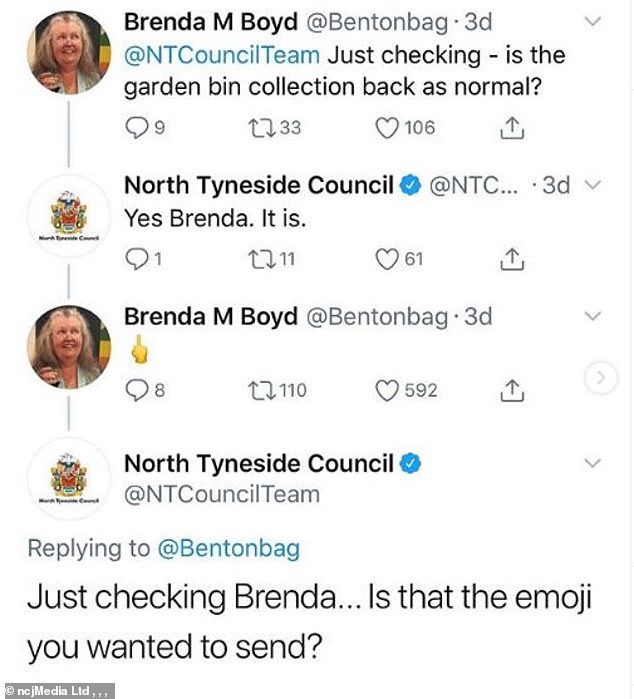 She had actually wanted to show a thumbs-up and only realised she had sent the rude gesture later on.

The council wrote back saying: ‘Just checking Brenda… Is that the emoji you wanted to send?’

She replied: ‘It was meant to be a thumbs up, but I may have the wrong glasses on – sorry if it was offensive.’

However the council’s social media officer did not take offence and said: ‘Seriously Brenda don’t worry about it. You’ve brought tears to my eyes. After a weird couple of weeks, it’s good to laugh.’

The amusing exchange has since been shared online thousands of times.

He said on Instagram: ‘This has made me howl with laughter.’

And scores of other people went on to comment on the conversation being ‘so funny’.

One Twitter message said: ‘Amid all the worrying news, this made me smile. Glorious.’