Almost half of Melbourne’s workforce has a job that’s based in the CBD, but only one in eight now head to the city on every day of the working week.

An RMIT study Are people ready for a Digital CBD? has found that, on average, people with a job spent just over three days a week in their primary workplace, a finding which suggests the city will need to evolve from a place of business to a place of experience. 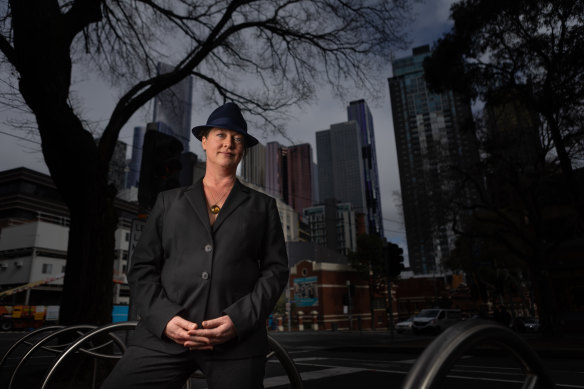 Dr Alexia Maddox from RMIT authored the report which found just 12.5 per cent of Melbourne residents worked full time in the CBD in a typical week. Credit:Jason South

The report was based on a survey of more than 2000 residents across greater Melbourne in April, and, of those surveyed, 45.9 per cent reported their primary workplace as the CBD but just 12.5 per cent said they worked full-time in the CBD in a typical week.

“People moved to suburban and regional areas because they could work remotely,” she said.

“Our homes are now the site of production, we are not just going home to relax from work, we are doing work. It raises the question of what is city infrastructure and how does the city support the extension of digital infrastructure into the regions.”

Of those surveyed, 91.3 per cent said increased productivity was important when working from home and was a driver for them.

Maddox said the research showed Melbourne residents had a preference for being able to choose in the future whether to work from home or the office and the purpose of the city had to evolve.

“People definitely see their local suburb as the centre of what they would previously go to the city for,” she said.

“It is changing what the role of the city is – it is a political seat, a place where businesses are visible and for people to come and mix. We have to think of the city as an experiential space.”

“We are not just going home to relax from work, we are doing work.”

Those surveyed indicated that work was still the most prominent driver for engaging with the city, with an average of 9.8 hours being spent in the CBD working on a typical week for employed people.

This increased to 16.8 hours a week for the 45.9 per cent who indicated that the CBD was their primary workplace.

The most recent foot traffic data from the City of Melbourne recorded a week-day average of pedestrian activity near the Town Hall sensor at 77.2 per cent of the pre-COVID benchmark.

However a Property Council survey for July found Melbourne’s office occupancy continued to go backwards, dropping from 49 to 38 per cent.

The report calls for all Victorians to be provided with affordable and reliable access to digital infrastructure to reflect the changing role of the CBD.

Maddox said she personally spent around nine hours a week at work in the city but as a “knowledge worker” her work had always been very mobile.

“The city for me is a place I go for professional practice and to experience creative inspiration,” she said.

“I love going to connect with people and as a central hub but my practice of health, wellbeing and place of work is all in the suburbs.”