Universities will change curriculums, increase non-ATAR entry options and be compassionate and flexible to help Victoria's year 12s into higher education after the disruption of the coronavirus pandemic.

Braybrook College VCE student Elise Mercieca has already been accepted into Victoria University's existing VU Guaranteed program to find a path into studying law. She said she now has some much-needed certainty about her future before exams. 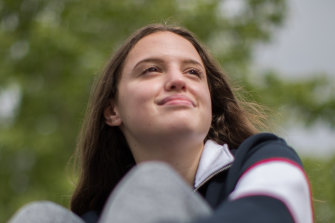 Elise Mercieca is one of the lucky year 12 students to have gained early acceptance into university next year.Credit:Jason South

"The score for law in a lot of places is pretty high and I know myself I wouldn't get that, especially this year," she said.

"It's really good to know you have somewhere to go. Now I'm not as stressed as some other people are."

A sense of trepidation among young people is pronounced. School leavers are about to enter a changed higher education system and a diminished job market while also having fewer options for post-school travel and gap years.

Lucy Skelton, in year 12 at Melbourne Girls' College, said she supported any measure that made it easier for this year's students to access university.

"For a lot of people uni is their time when they find their people and those who are passionate about the same things; it's so important," she said. 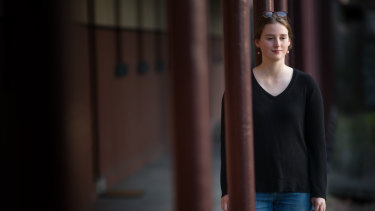 Lucy Skelton is in year 12 at Melbourne Girls’ College.Credit:Jason South

Ms Skelton said her own early acceptance to Australian National University based on her year 11 results felt like she was walking into exams with "a safety net".

At Monash University changes will be made to curriculum and policy to reflect the impact of coronavirus on students.

"Monash will continue to work closely with the Victorian Curriculum and Assessment Authority to understand the components of this year’s VCE year 12 curriculum that have been disrupted due to the COVID-19 pandemic," a university spokesperson said.

"We will then adapt the first year Monash curriculum in response to any changes.

"Flexibility, adaptability and compassion will continue to be shown towards 2020’s year 12 students."

Swinburne and La Trobe universities have also announced new ways for students to access study without an Australian Tertiary Admission Ranking including letters of recommendation from schools and completing micro-subjects in advance.

A spokesperson for RMIT said the university was "working through new ways to support them [students] in achieving their goals" including a vocational pathway program.

Schools are heavily involved with preparation too with careers counselling and the assessment of every VCE student for special consideration under way.

Lakeview Secondary College year 12 student Jordan Si Tu said the pressures of this year had made him and his classmates much more focused on their futures.

"Students this year are actually trying harder than previous year 12s because they're all worried and saying what if I don't get into uni?" he said.

Despite the positive focus on admissions, Deakin University education lecturer Dr Rosalyn Black said the federal government's recent increase to the cost of arts and humanities degrees could deter some students from study.

"Logic says it's very likely to have a real impact on student choices, to their detriment," Dr Black said.

"It speaks much more to the philosophy of higher education as a form of training rather than as an education for life and participation in society."