A zoo owner may be forced to euthanise his animals or let them starve after struggling to find £2,000 a day to feed them during the coronavirus lockdown.

Andy Cowell founded the Fenn Bell Conservation Project with a pair of Kunekune pigs but now houses 120 animals and 40 different species at his small zoo in St Mary Hoo, Kent.

During the lockdown the 51-year-old has relied on a combination of his own money and donations to keep his fishing cats, coatis, marmoset monkeys and other animals fed. 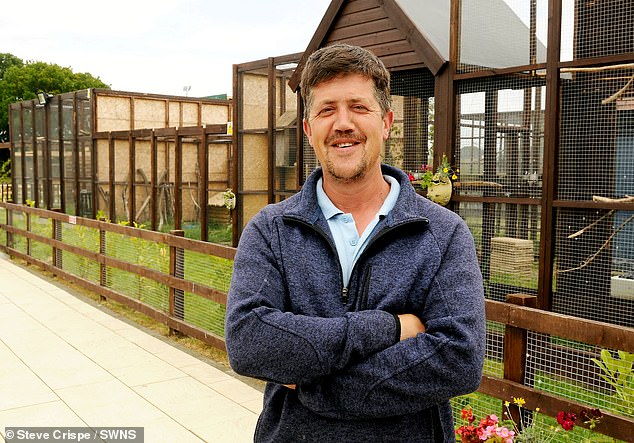 Andy Cowell, 51, is appealing for donations to feed the animals at his zoo in St Mary Hoo, Kent. He can’t afford to pay for the 120 animals housed at the Fenn Bell Conservation Project and may have to choose whether to euthanise them rather than letting them starve

He said he is getting close to running out of money to pay for the animals enormous food bill and has had to start considering alternative measures which are unthinkable to any animal lover.

Mr Cowell, who owns the zoo and adjacent pub, said: ‘I’ve had so many sleepless nights over the last few weeks trying to come up with a way to keep the zoo running without visitor donations, ticket sales or the pub and restaurant open.

‘We’ve had to make a plan and may have to make the difficult decision to euthanise some of the animals to give the rest a chance. It’s that or they starve.’

He said the racoons would be the first of his animals to be euthanised if he has to see through his last-resort plan. 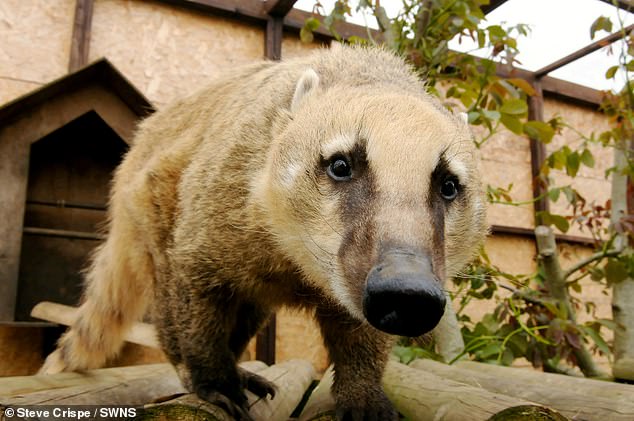 Basil the Coati  is just one of the animals Mr Cowell is struggling to find the £2,000 a day needed to feed them

Mr Cowell said: ‘Racoons are classed as invasive species here in the UK so unfortunately they would have to go first. But it’s not something I ever wish to do.

‘Other zoos have stayed quiet during this crisis but I have broken ranks and asked for help. I am not prepared to sit here and watch everything go down the pan. It will not beat us.

‘I don’t want to be sitting there at the end having to say I’ve put down some of my animals because of the coronavirus.’

He told Kent Online he has been working 100 hours a week for nothing and said the government grant they received when they closed the pub and furloughed the staff wasn’t enough.

Supermarket chain Sainsbury’s have donated some food to the small zoo but Mr Cowell said the donations do not cater for the specific dietary needs of the animals which include lemurs, monkeys and binturongs.

The conservationist said: ‘I hate begging, I really do but we will run out of money. I appreciate people are dying and my heart goes out to everyone struggling in these hard times but the animals we keep here, they didn’t ask for this situation.

He added: ‘Small zoos in local communities are struggling and the coronavirus will ruin them.

‘I feel like the government has forgotten about us. The big zoos will have grants and funding but smaller places rely on public donations.’ 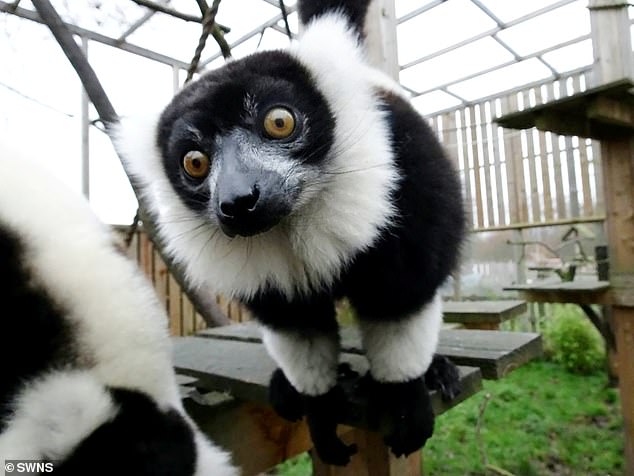 Sainsbury’s has donated some food to the zoo but Mr Cowell says it doesn’t meet the specific dietary requirements of the animals, including lemurs monkeys and binturongs

Mr Cowell has used at least £6,000 of his own money to feed the animals and is also receiving donations on a GoFundMe page which is currently around £4,000 below its £10,000 target.

Desperate for help, he took to Facebook to put out an emergency plea highlighting his predicament.

He said: ‘Around 18,000 people saw the post and I just thought if each of those people gave a pound, just a pound, then we’d have enough money to last us until June at least.

‘We don’t want masses of money from a few people. If many could give a little then just maybe we could make this through to the other side.’

Many individuals and some businesses have donated generously but Mr Cowell said he would rather a little bit from many than a few people ‘stretching’ themselves. 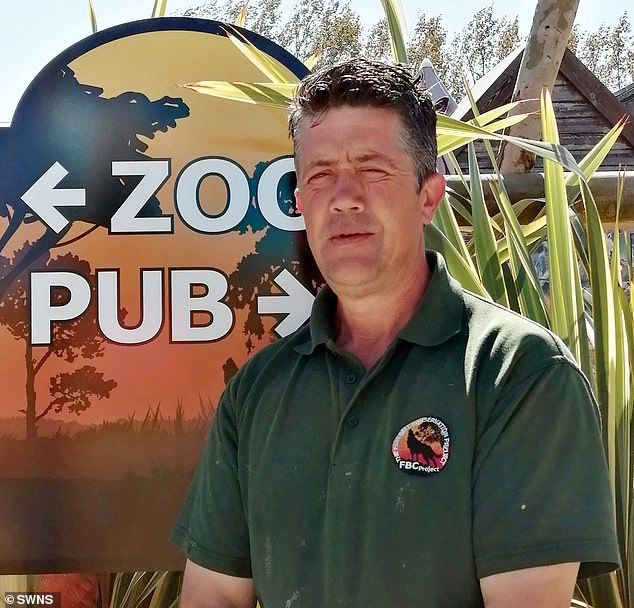 Mr Cowell, who owns the zoo and the pub adjacent to it, set up a GoFundMe page to help raise donations to feed the animals but doesn’t want people ‘stretching themselves’ to help out

The animal lover opened Fenn Bell Inn and zoo five years ago and has invested most of his money into it.

He works with his wife, Kelly, and daughter, Sydnee, and collaborates with colleges to help train animal management students, as well as schools to foster the next generation of ‘zookeepers and conservation warriors.’

If his zoo survives this testing time he hopes to develop a new conservation area to breed and release rare animals such as red squirrels back into the wild.

His plea joins a number of wildlife and conservative centres across the country which are in desperate need of donations to see them through the lockdown.

He added: ‘Regardless of what we manage to raise if we reopen when all of this is over we’ll open on the first weekend for free to say thank you to everyone who’s helped and donated.’

Related posts:
April 24, 2020 World News Comments Off on Zoo keeper may have to put animals down rather than let them starve
Celebrity News:
‘Avengers’ Male Cast Defends Chris Pratt Over ‘Worst Hollywood Chris’ Label, but It Backfires
Dax Shepard Covers His Face With His Shirt While Getting Food Delivered
Scott Disick Hilariously Pokes Fun At Kourtney Kardashian's Use Of WAP Lyrics On Instagram!
Ina Garten Reveals What's 'Really Impressive' To Her at Dinner Parties
Jacqueline Jossa has a secret tattoo that was inked by husband Dan Osborne
Recent Posts
This website uses cookies to improve your user experience and to provide you with advertisements that are relevant to your interests. By continuing to browse the site you are agreeing to our use of cookies.Ok